The memes showed a fake quote from Queen Elizabeth II saying she had information that would lead to the arrest of Hillary Clinton.

Social media posts claim Queen Elizabeth II announced before she died that she had information that could lead to the arrest of Hillary Clinton. This is false; there is no record of the queen making such a statement, and the claim matches a years-old meme that reflects a conspiracy theory that the former secretary of state and her husband kill their political opponents.
“I have information that will lead to the arrest of Hillary Clinton,” the queen is quoted as saying in an Instagram post shared September 9, 2022.

TRENDING: THAT WAS QUICK: Buses Arrive at Martha’s Vineyard and DEPORT Illegals Off the Island (VIDEO)

Here are some of the memes: 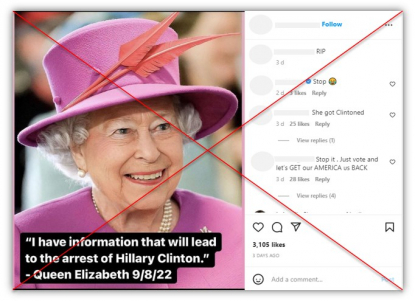 When will they classify this as “dangerous misinformation?”

People mocked the AFP for missing the joke:

He’s factchecking this one next! pic.twitter.com/AIMOf4x2VA

You don’t need to be missing a sense of humor to be a Liberal — but it sure helps!

For the antidote to media bias, check out ProTrumpNews.com!

Customs and Border Protection: “Massive Database Can Be Accessed By 2,700 CBP Officers Without Warrant”