Portland: Neighbors wonder why this dangerous homeless man is still on the street 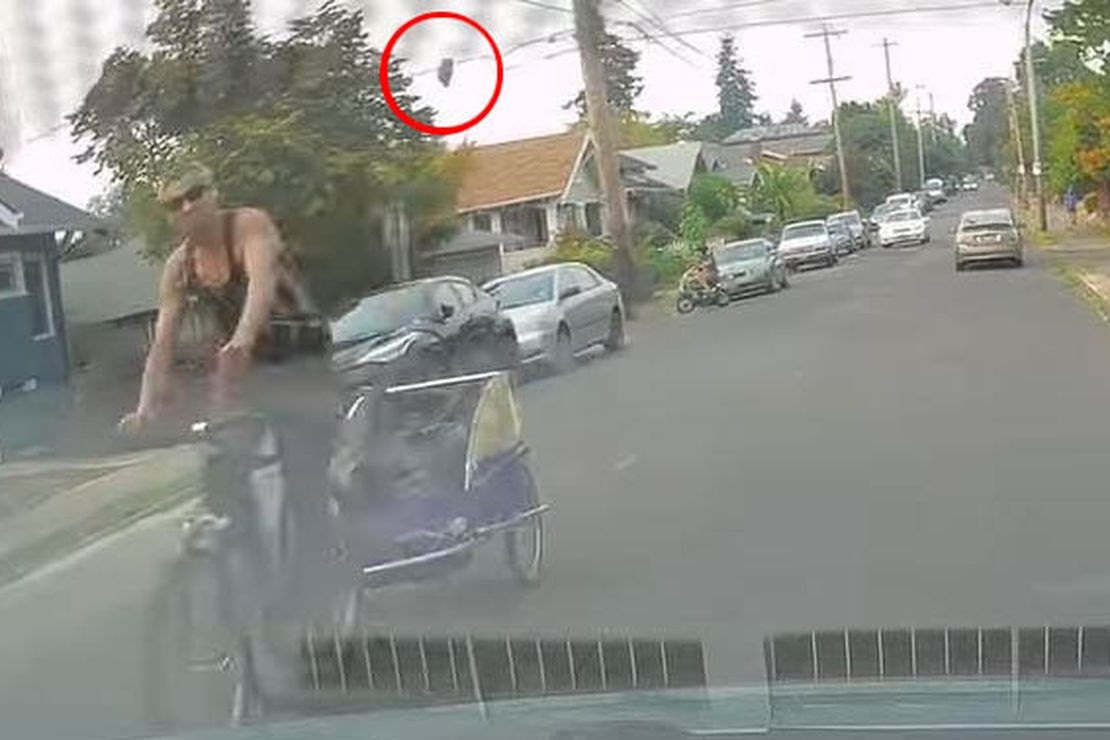 A south Portland resident named Steve Magnuson was driving home when he saw a man on a bicycle approaching in the opposite direction. As the cyclist approached he raised his hand and threw a rock at Magnuson’s windshield. What he didn’t know is that Magnuson had a dash cam installed which meant the whole thing, including his face, was captured on camera.

Magnuson didn’t see where the guy on the bike went after smashing his windshield but he drove by a nearby homeless camp and spotted the same bike with the trailer. He then went to police with the video and the location of the man.

Police used the video to identify the suspect as 51-year-old Robert Casey McClatchey, and gave him a $100 citation for second-degree criminal mischief, police said. That came as a disappointment to Magnuson, who felt his life was threatened.

“If they had hit a sweet spot, and that rock had gone through the laminate, or if it had hit the side window the rock would’ve gone right through,” he said.

And it turns out this isn’t the first time this has happened in the same neighborhood. Another neighbor called police after her windshield was smashed and they told her that, even if they found him, all he would get was a $100 citation.

Another neighbor — who wished to remain anonymous — says the same thing happened to her a few weeks ago near 42nd and Belmont. She says she saw a man on a bicycle pulling a cart and pulled over to give him room. She says the man threw what appeared to be a coffee cup at her car, which she says she later found had paint in it, splattering near her tires.

She says as he got closer, he raised his hand, and she thought maybe he was going to wave and thank her for pulling over — not expecting what came next.

“Instead, he took something like a really heavy glass bottle and he just started smashing at my windshield, right in front of my face. My windshield shattered. It didn’t break through but there were shards of glass everywhere,” said the woman. “It was a violent attack, completely unprovoked.”…

“I went home and called the police and when the officer came, he said, ‘well even if we can find him, he’ll just get a $100 citation,’” the woman told KOIN 6.

Another neighbor had a similar experience. She called police but they never located him.

Tracy Salsbury was heading home from work around 1 a.m. Aug. 26 when she noticed a car facing the wrong way on a nearby railroad track. Salsbury slowed down to see if someone needed help when a man ran into the road screaming at her. When she went to drive by him, he threw a rock at her driver’s side back window.

“He just jumped out of the dark,” Salsbury said. “I ducked because glass was flying everywhere, and when I looked in my side mirror I could see that bike with the trailer.”

There was yet another incident last September. In that case, McClatchey threw a rock that bounced off a driver’s hood into his windshield. Police did find him that time and he got another $100 citation.

Obviously there’s a pattern here. So far no one has been seriously hurt but that could change at any moment. The Oregonian reports that second-degree criminal mischief is a bookable offense, meaning the police could arrest McClatchey but for some reason have chosen not to do so. To Magnuson and Salsbury the decision to hand out citations police know McClathey will never pay doesn’t make a lot of sense.

Salsbury and Magnuson both said that the citation was not equivalent to the crime, and that they wished police had arrested McClatchey.

“Really? You think he’s going to pay a citation?” Salsbury said. “Now that I’m hearing about it happening to other people, I’m like, why is he out here?”

“Why is he out here?” is a great question. The citations are just a bit of security theater that changes nothing for the people who are being victimized by this lunatic. So why don’t police arrest him and get him off the street?

If you’re a regular reader you can probably guess the answer. Portland has lost a lot of police officers over the past two years and, despite efforts to hire replacements they continue to be seriously understaffed. I’d be willing to bet that police aren’t arresting this guy because issuing a citation (or not bothering to even look for him) takes up a lot less of their time than making an arrest. This summer the city’s mayor declared a state of emergency because of the spike in shootings so the police really are busy with worse crime.

While I understand that a lunatic throwing rocks at drivers isn’t a top priority, the fact that Robert Casey McClatchey is still on the street is precisely the sort of thing that has so many people leaving Portland for good.

The persistent, low-level crime which progressive cities and DAs have decided is not worth their time is precisely the crime that drives regular people crazy. They see that the perpetrators aren’t arrested and even when they are they get released almost immediately. There’s simply no penalty for this type of crime in many west coast cities. The resident and the criminals know you can get away with theft or damage so long as you only do it a little at a time.

Boom, boom! Out go the lights!