Democrats are in far, far more trouble than you think

No matter how much trouble you think Democrats are in, you are likely underestimating their peril.

Ed wrote a great piece on the ABC/Washington Post poll earlier this weekend, and I thought I would expand on it with my own thoughts. Because I am arrogant like that.

If you pay attention to head to head matchup polls the Democrats look like they might remain competitive in battleground districts. Republicans appear to be struggling in some key senate races, and Republican partisans are either secretly or openly nervous that the Republican wave predicted earlier this year will be reduced on the breakwater of the Dobbs abortion decision.

Well, if the the ABC News/Washington Post poll is even remotely reflective of reality, Democrats should head for the hills because a red tsunami is about to overwhelm them. There is no good news for them. At all.

Let’s look at some findings:

This is where Democrats are hanging their hat. They have nothing else:

This is reflected on your television sets. Here in Minnesota abortion is–literally–the only issue Democrats are running commercials on. Watching college football games yesterday I was treated to tens of commercials blasting the Republican candidate for governor on abortion. Usually in 3 commercial-in-a-row blocks. They have nothing else, in a state that hasn’t elected a Republican governor without a serious 3rd party candidate in the race since the 1990s. They are running very scared, despite the fact that the head to head polls look good for them.

But the economy, which dominates people’s concerns? Not good if you are a Democrat: 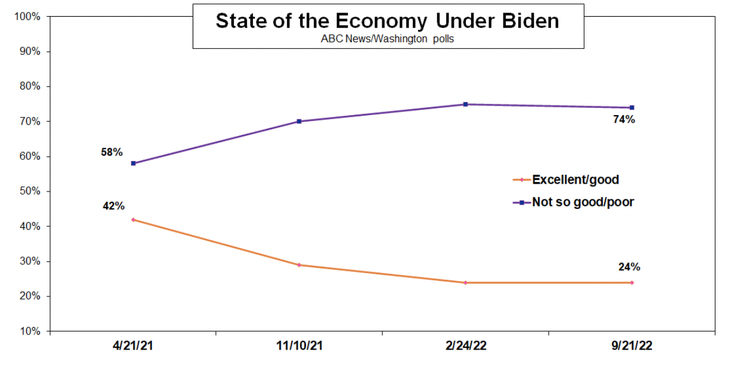 The overall issue terrain is just awful for Democrats: 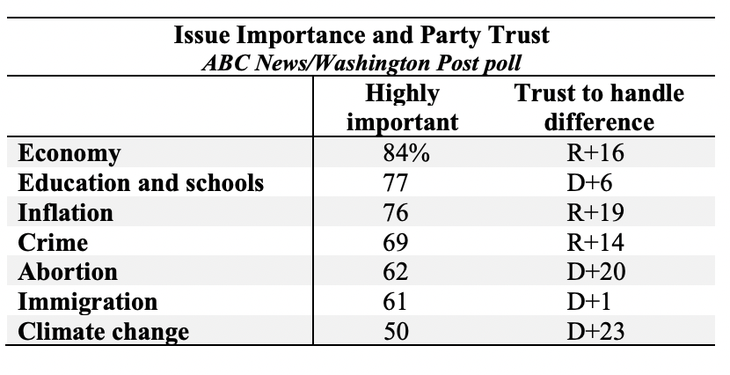 Abortion is 5th. Fifth. And it is the issue they are running on.

When these are assessed as a combination of importance and party preference, inflation and the economy top the list, followed by abortion, then climate change, crime, education and immigration. While inflation, the economy and abortion are marquee issues, one stands out for another reason: The Republicans’ 14-point advantage in trust to handle crime matches its largest since 1991. Among independents, it’s a whopping 34-point GOP lead. Results among registered and likely voters alike are highly similar to those among all adults (and there’s still time to register). Among shifts, in one likely voter model, the Democratic lead in trust on abortion slightly shrinks. More broadly, Americans divide evenly, 42-42 percent, on which party they trust more to cope with the main problems the country faces in the next few years (average trust across the seven individual issues tested in the survey likewise is essentially even). This compares with an average 5-point Democratic advantage on this question in more than 100 ABC/Post surveys since 1982. A comparison with the 2018 midterms is instructive: Then, the public by 55-39 percent preferred to see Congress controlled by the Democrats, to act as a check on Trump, than by the Republicans, to support Trump’s agenda. Today, 48 percent prefer a Republican Congress, to act as a check on Biden; 45 percent, a Democratic one, to support his agenda. As with vote preferences, this goes to 51-46 percent for the GOP in one likely voter model.

There is lots more to chew on in the poll, but the TLDR is very clear: Democrats can look forward to drowning in a tsunami this November unless something dramatic changes the dynamic.

Republicans have to stop obsessing over 2020 election, says …

Semafor: DeSantis refusal to do The View is a national crisis, or something

Widowed jeweler who lived in Europe was actually a Russian spy