Politico: Biden’s economic victory lap keeps getting interrupted by reality, or something

It’s tough to tell which party is more clueless in this construct. Is it the White House and Joe Biden, who threw a “Mission Accomplished” celebration of the so-called Inflation Reduction Act on the same day as the CPI report that showed inflation still clocking in above 8%?

Or is it Politico, the news organization that wonders why people won’t let Biden have his victory lap while they struggle with five quarters of erosion in real disposable personal income?

Emboldened by a string of legislative victories, President Joe Biden has leaned into his record on the economy, increasingly confident that the nation’s outlook is brightening after months under a cloud of rising prices and consumer anxiety.

Wages are up, gas prices are down, the thinking goes. And following a year of fits and starts, Biden clinched congressional deals aimed at reshaping major parts of the U.S. economy — and cementing elements of his own presidential legacy.

But just as the White House was rushing to capitalize on its winning streak — in hopes of turning around an economic narrative that has dogged the administration from its earliest days — complications have arisen. The lengthy fall in gas prices finally ended, inflation has stayed stubbornly high and a bleak global economic landscape has rattled the markets, with both the Dow Jones and S&P 500 nearing their weakest levels of the year.

The cross currents of economic and political news have left the White House in a tricky position.

It’s not just a “tricky position” — it’s a flat-out lie. The Inflation Reduction Act didn’t have anything to do with inflation, and in fact will slightly increase inflation in its first year. The IRA was nothing more than a skinny version of Biden’s Build Back Better plan, with tons of government spending offset somewhat by massively expanding the IRS to suck more resources out of taxpayers to fund it.

That’s the reality that impedes Biden’s victory lap. Inflation has not gone away, and to the extent it does will only happen through the Fed’s demand destruction that will shortly push the economy into a full-blown recession. Biden and his Democrat-controlled Congress could have alleviated that necessity by reining in government spending and retooling regulatory policies to push supply-side economics, as even the progressive Center for American Progress pleaded last week.

And let’s not forget about Biden’s latest move — a trillion-dollar student-loan debt forgiveness that comes entirely from the Fed’s money tree. Charles C.W. Cooke points out this folly at NRO:

The cross currents of economic and political news have left the White House in a tricky position. After spending much of his term battling inflation and fears of a recession, Biden has begun traveling the country touting long-term investments in manufacturing and climate.

The problem with this is that it isn’t true. Biden has spend much of his term coexisting with “inflation and fears of a recession.” But he has spent pretty much none of his term “battling” it. On the contrary: almost everything that he and his party have done — including his most recent move, the illegal “forgiveness” (i.e. transference) of up to one trillion dollars in student debt — has made inflation worse, made interest-rate hikes more likely, and made the “fear of a recession” more acute. …

Of course he’s is finding it hard to take a victory lap. There’s no victory to celebrate.

On that point, let’s recall exactly what the CPI report told us about inflation two weeks ago:

Note that year-on-year core CPI rose in August even while gas prices fell enough to moderate overall inflation to, er, 8.3%. This was the result that preceded Biden’s planned Mission Accomplished party on September 13 by a few hours, don’t forget. Core CPI doesn’t include either energy or food, and food inflation is raging well above these levels.

That’s also true in the PPI: 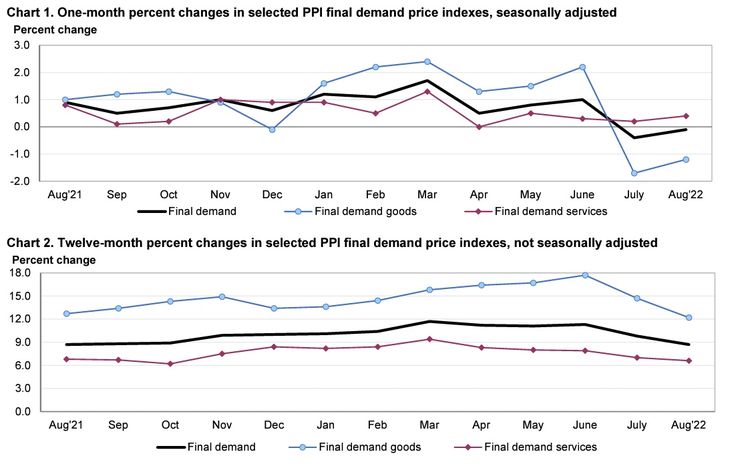 This shows that inflation has bled into the service sector as well as the goods sector. Despite a couple of good month-on-month results in the latter, overall year-on-year PPI inflation remains at the 9% level and at 12% on final demand goods.

The American public knows better than the White House and Politico that there isn’t any victory to celebrate. This emperor has no clothes. Unfortunately, he’s surrounded by a sycophantic media industry that continues to extol his finery nonetheless.

The key to a good economy? A huge IRS!

Twitter: So long Kanye, we knew Ye too well