Wisconsin is leaning Red for midterms

I have been arguing that the political environment is much worse for Democrats than the current narrative suggests, and as the midterms approach that is starting to be reflected in the polls.

And since the polls in recent years have significantly undercounted Republicans, things may be even worse for Democrats. We won’t know if the polls this year are as bad as those in recent elections, so I will refrain from adding my traditional 3+ points to Republican ratings.

In the Wisconsin Senate and gubernatorial races things are looking really bad for Democrats. RealClearPolitics rates the race a “toss-up,” but the polls seem to indicate that is no longer the case–if it ever was.

A newly released poll conducted for AARP shows Johnson up by 5 points, and Republican Governor Michaels up by 3. As you may recall Wisconsin was one of the “blue wall” states that was supposed to hand the presidential election to Hillary Clinton (it obviously didn’t–Trump won Wisconsin in 2016), and the state was until recently pretty safely in the Blue column.

No longer. The results are brutal for Democrats, and probably presage a blowout for Republicans. While AARP unsurprisingly oversampled 50+ voters to tease out their views in particular, the results for the poll are for the entire voting population. They oversampled older voters for a secondary analysis because they are, after all, AARP.

Note the preferences of Independents, who will decide the election. Republicans up by 10 in the Senate race, and R+7 in the gubernatorial race.

That is a disaster if you are a Democrat. I would expect the Democrats to abandon Barnes soon. You simply can’t win a race if Independents swing so hard for the other party. If these numbers are close to correct Democrats are doomed.

Why are things so dire for Democrats? Easy. Voters are unhappy, and particularly unhappy with the president. If the election were held today Trump, with all his problems, would defeat Biden. There is a lot of voter remorse. 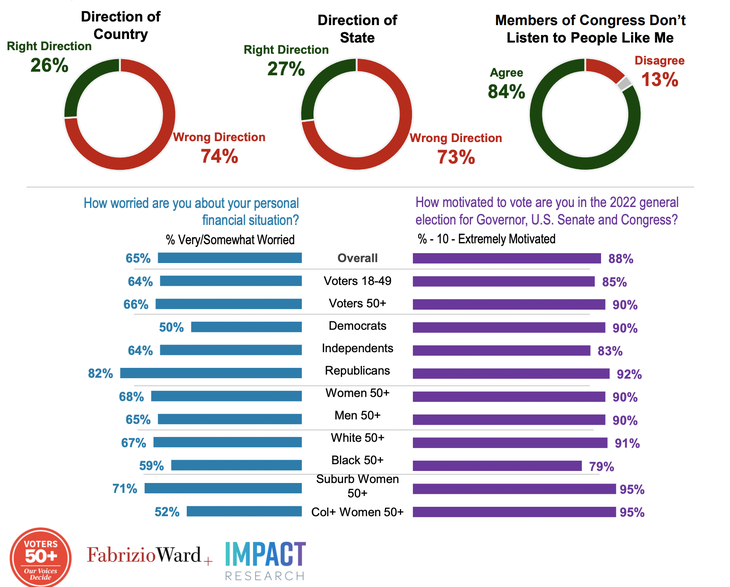 Political Environment: Wisconsin voters are quite pessimistic about both the direction of the country and of the state, with just over a quarter saying right direction for both. 84% of voters agree with the statement that members of Congress do not listen to people like them, and almost two thirds are worried about their personal financial situation. All of this contributes to a high level (88%) of being extremely motivated to vote in November, which is even higher among voters 50+. President Biden’s job approval is negative at 45% – 55%, while former President Trump’s recalled job approval is also slightly negative at 48% – 51%. Gov. Evers’ job approval of 47% – 52% is very similar to his image, while Sen. Johnson’s job approval (48/50) is identical to his image. Republicans have a 50% – 45% lead on the generic Congressional ballot. In the race for Senate, among voters 50+ there are a variety of most important issues, led by inflation (16%), abortion (15%), taxes/spending (12%), and Social Security/Medicare (11%). In a head-to-head matchup, inflation is prioritized over the court overturning Roe v. Wade by a 55% – 41% margin. For the governor’s race among voters 50+, inflation (21%) is the top issue, followed by abortion (16%), law & order/crime (10%) and voting rights (9%). Food (36%) is the top concern on rising costs followed by health care/prescription drugs (22%), and gasoline (17%). 64% of voters 50+ plan to vote on Election Day, 18% plan to vote by mail, and 12% plan to vote early in person

Roe vs Wade is a huge issue for Democrats, but not so much for Independents and Republicans who prioritize inflation by a large margin. 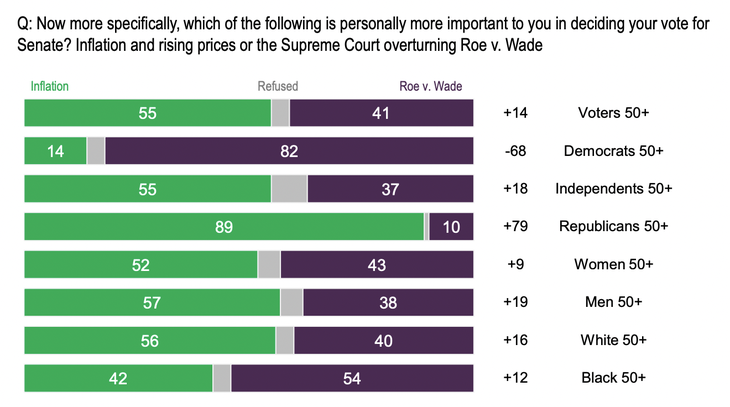 Early on in the race Barnes was actually polling better than Johnson, but the latest polls are almost as brutal for Barnes as the AARP poll. RCP keeps a running tally and Barnes is clearly falling behind. It will be very difficult to reverse the trend.

It is a truism that the only poll that matters is the one held on election day, but if I were Johnson I would think election day could not come soon enough. Things look very good for him in Wisconsin.