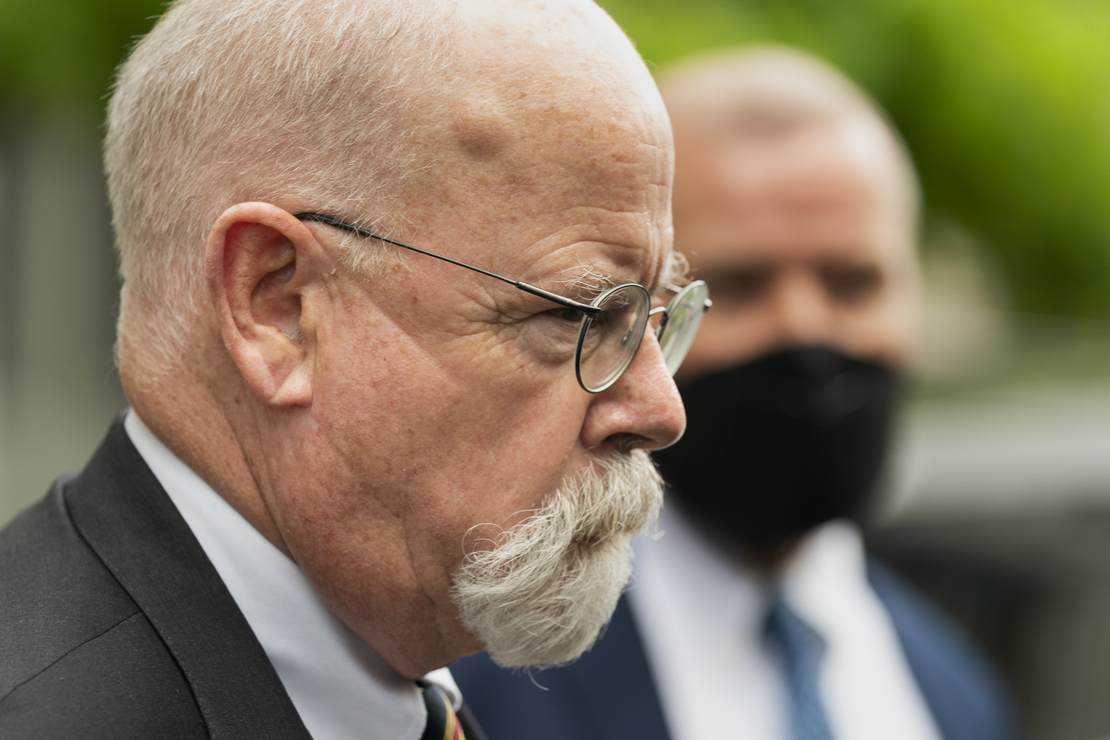 An FBI intelligence analyst testifying in the special counsel probe by John Durham says he never really checked the fake story about the so-called “Steele dossier” in the Trump Russia collusion hoax — including the infamous and non-existent “pee tape” — and assumed FBI sources were telling the truth. This, even though the FBI offered a $1 million payday to verify it (it went uncollected), proving the FBI knew it was “salacious and unverified” in the words of former FBI chief James Comey. But knowing that, the FBI used the dossier against Donald Trump anyway and lied to the nation’s top spy court to get a warrant to spy on his campaign.

That was basically the upshot from the first couple of days of testimony in a Virginia courtroom in the John Durham special counsel probe into the derivation of the fake Russia collusion scandal.

The lies told by the professional fabulists about Donald Trump being a Russian secret agent were so tantalizing that the FBI thought them too good to check. The FBI offered the dossier novelist, former MI6 spy Christopher Steele, $1 million, labeled a “bribe” by constitutional attorney and radio host Mark Levin, to prove the allegations.

But that didn’t matter. In a high-stakes game of Ding Dong Ditch, FBI investigators put their swamp droppings in a brown bag, lit it on fire, and threw the whole damn mess on the front porch of the FISA spy court.

#Durham via @GillianMorley_ FBI analyst Brian Auten testified FBI was offering Christopher Steele $1 million for corroborating evidence for claims in the dossier, but he was not able to provide any. pic.twitter.com/tVqTafR8qe

The game had its intended effect of leaving Donald Trump covered in FBI and DNC excrement, impeding his 2016 campaign and presidency, and teeing up years of fake news and impeachments of the unorthodox president. This helped cost him the 2020 election.

Related: The FBI Hired Trump ‘Pee Tape’ Liar as an ‘Informant’ to HIDE Him From Us

Igor Danchenko is on trial for loading the bag with the lies that were then used by his former MI6 spy buddy, Christopher Steele, to impugn Trump. Danchenko, a former Brookings Institution researcher, is on trial for making false statements to the FBI. After making up the “pee tape” and other parts of the fake dossier, the FBI made Danchenko a “confidential human source,” meaning his identity would be hidden to protect FBI sources and methods.

Some source. Some methods. During testimony, FBI intelligence analyst Brian Auten left the impression that his agency was spectacularly incurious about verifying the tales told them by Danchenko, who just a few years before was investigated and cleared for being a Russian FSB spy.

The $1 million payday, as former federal prosecutor Andy McCarthy put it, meant “that the FBI offered to pay such an exorbitant sum in hopes Steele’s anti-Trump claims could be backed up is proof positive that the bureau knew these claims were not verified.”

And then they went to the FISA spy court to get a warrant based on what was in the Ding Dong Ditch bag. That means the FBI lied to the FISA court after Danchenko and Steele lied to them.

McCarthy said “that is key… Even though it could not prove the Steele allegations and had every reason to know they were exaggerated if not out-and-out false, the FBI relied on the Steele claims in sworn applications.”

As I previously wrote for PJ Media, Danchenko and his Brookings colleagues were neck deep in the Russian collusion and Trump-Ukraine impeachment storylines in support of their fellow Democrats.

Danchenko worked for the Brookings Institution from 2005 through 2010. Brookings is the think-tank waiting room for every Democrat administration and acts as a Democrat spin machine. For example, Ukraine/Russia expert and Danchenko friend Fiona Hill provided her expert opinion to Congress that President Donald Trump’s phone call with the president of Ukraine was really bad. Impeachment-level bad.

It was Hill who introduced Danchenko to eventual “dossier” author Christopher Steele.

In 2008, as part of his spy duties, Danchenko is alleged to have offered bribes to Brookings colleagues who worked with the Obama Administration in exchange for information. They reported Danchenko to the feds. And then eventually the Feds hired him. It seems Danchenko was making a lot of money from all sides throughout the years — including from Steele, who hired the Russian defendant to press his “sources” in the motherland to get dirt on Trump for his “dossier.”

Special counsel Durham maintains that the FBI was somehow duped into believing the fake stories.

Auten told defense attorneys he thought Danchenko was telling them the truth.

But Durham wasn’t buying it. In questioning on Wednesday, Durham, who’s lead litigator in the case, went after Auten about him and his colleagues at the FBI during the Crossfire Hurricane investigation and the Mueller special counsel investigation treatment of the incredible allegations.

Technofog provides the key part of testimony when Durham questioned Auten about why he didn’t try to check Danchenko’s story by checking his phone, text, and travel records.

Q. And is there some particular reason why experienced FBI personnel wouldn’t go and look to see what the phone records reflected?

A. Again, you would have to talk to somebody that was in the investigative side of things. I — as an analyst, I can’t — I can’t ask for phone records. That has to be –

Q. You want this jury to believe that analysts don’t participate in investigative decisionmaking?

A. Analysts participate, but analysts aren’t the ones that are going to make the decision to go out and actually get phone records or obtain NSLs or the like.

Q. Do you believe whether — with respect to this information, if people were much too ready, willing, and able just to accept it?

A. I don’t know if I would articulate it that way.

Q. Well, you didn’t have any corroborative evidence, correct?

It got worse. Durham asked, “you and your colleagues took the info and put it in the Carter Page FISA application. You didn’t have corroboration from FBI databases from other intel agencies, or from Christopher Steele and it went into the FISA application?” The answer from auto was “correct.”

Durham: “You & your colleagues took the info… & put it in the Carter Page FISA application. You didn’t have corroboration from FBI databases from other intel agencies, or from Christopher Steele & it still went into a FISA application.”
FBI: “CORRECT” #FISA #FBI #Durham pic.twitter.com/YKBNIJ7KpH

Both CNN and MSNBC were flummoxed as to why Durham would undermine his false statements case against Danchenko about him knowingly lying to the FBI and attempt to impeach Auten, but Durham may have more on his mind than this one case even though it might be the last by the special counsel.

Oh boy, #Durham‘s latest #RussiaProbe show trial is not going well for him. In general, if you have to impeach a witness you called, you are losing….badly.https://t.co/E6OauGdopw

Durham’s orders are to find out how this corrosive and potentially election-changing case got started in 2016.

Most Republicans who watched the years-long effort to forever silence Donald Trump are in disbelief and disgusted with the FBI and the Department of Justice (DOJ). They want scalps. They want the FBI and DOJ purged of partisan actors who criminalize political thought.

But what they may get is a report by Durham that will curl your hair. Indeed, Durham’s already laid out shocking details in his previous court papers and testimony in the Michael Sussmann case. That’s where we learned from Hillary Clinton’s 2016 campaign manager that the candidate green-lighted the fake Russia Trump Alfa Bank operation.

During his investigation, Durham told Auten that he was moving the agent’s status from being merely a witness to being a subject, though not target, of the investigation. It doesn’t appear that Durham is quite done yet. And considering the trial is in Virginia and not D.C. there may be a fair verdict rendered in the case for a change.

We can only hope.

Where Do We Go From Here?