Ye’s interview with Revolt TV’s Drink Champs was taken down from YouTube on Monday after amassing over 2 million views.

Host N.O.R.E., who spent the weekend bragging about how many views the interview got, abruptly changed his tune on Monday morning after taking heat.

“My Ye interview got more views then football haha!!!” N.O.R.E. said Sunday in a now-deleted tweet. 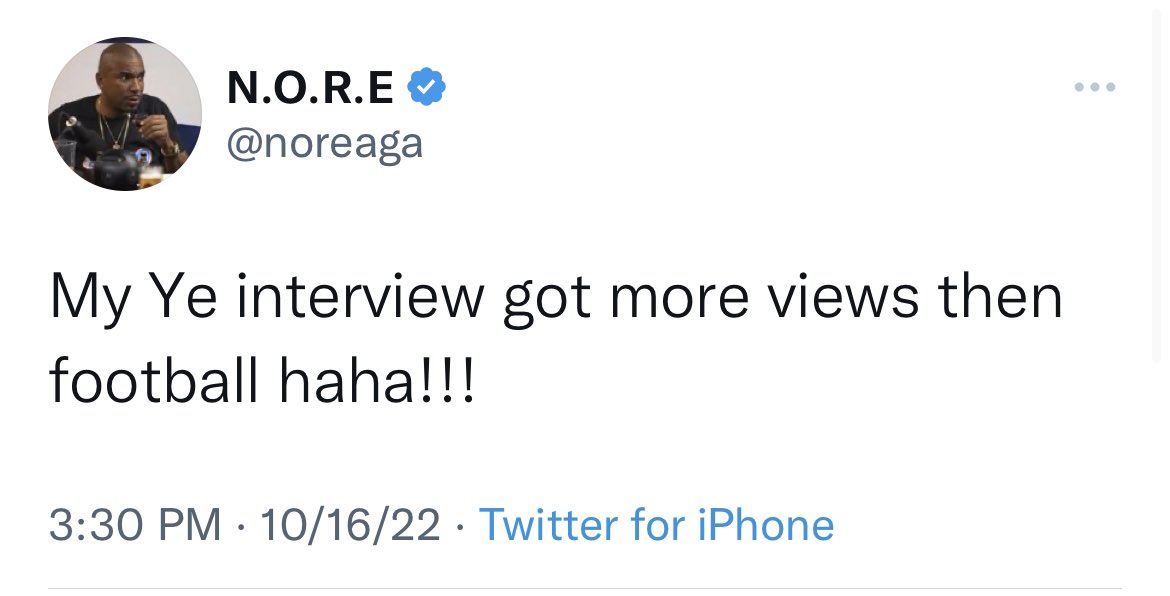 “They taking it [the interview] down,” N.O.R.E. texted a friend on Monday afternoon, not clarifying who “they” was.

NORE @noreaga texted me that they’re taking down the Interview

The Mask Is Off

The House is on FIRE for a reason 🔥🔥 pic.twitter.com/Av3hebnf7L

“I made a mistake doing the Kanye interview,” he said. “I could come out here and say this was Kanye’s thing and that’s it. And guess what? People will forgive me and I could get away with that. But that’s not what I’m doing. I feel like I failed my people. I called ‘The Breakfast Club’: because I wanted to apologize to my people.

“I want to be honest. I support freedom of speech,” he continued. “I support anybody not being censored. But I do not support anybody being hurt,” N.O.R.E told “The Breakfast Club” host Charlamagne Tha God. “I did not realize that the George Floyd statements made by Kanye on my show were so hurtful. You have to realize that it was the first five minutes of the show – like when he walked in, he told my producer that if we stop filming, he’ll walk out. So I didn’t want a Birdman moment, like when he walked out, so I wanted the man to speak.”

N.O.R.E. stressed that he did he did “check” West in regard to some of the more incendiary comments regarding George Floyd, particularly the claim that Floyd’s death was due to a Fentanyl overdose rather than police officer Derek Chauvin — who was convicted on two counts of murder and one of manslaughter. “I actually checked him about the ‘White Lives Matter’ thing too, but they were later in the episode, and I was already inebriated at that time, that maybe people looked over it. But I apologize to the George Floyd family.”

While N.O.R.E. didn’t specifically focus on West’s more incendiary comments about Jewish people — including that the “Jewish owned” media is out to get West, and that everyone from “Jewish basketball team owners” to “Jewish record label bosses” are in control — or to labeling Pete Davidson, West’s estranged wife Kim Kardashian’s former paramour, a heroin addict, the “Drink Champs” host did offer a blanket apology to all who may have been wounded or insulted by West’s comments.

“I don’t watch my own interviews because I know I’m great. But when I watched this one, I cringed. And I felt terrible. So I have to say that I am sorry to anybody who was hurt by his rhetoric, anybody who was hurt by his speech. I want to apologize to the George Floyd family… I want to apologize to anyone who was hurt by someone saying something in my platform. Contrary to popular belief, we own ‘Drink Champs.; We own our IP, so the person to blame is us. I’m not going to blame Puff Daddy [the owner of Revolt.TV where “Drink Champs” is aired]. Six years of this, I’m not going to have the excuse that I am not a journalist. I have responsibility…. I do not want my people to think that I did not step up at the time, but if you watch the whole 3 hour and 38-minute interview, I represent for George Floyd and Black people five, six, seven times.”

N.O.R.E. also attempted to defend himself by stating, “I had four Jewish people in the room” during the interview, including Steve Rifkind from Loud Records. “I looked to the Jewish people in the room to tell me when Kayne was going over the line.” Their looks, apparently, were those of “understanding where Kanye was coming from,” he claimed, “but I don’t support none of it.”

N.O.R.E. also went on HOT 97 to apologize to host Peter Rosenberg and the rest of the Jewish community for his part in not pushing back hard enough against Ye’s anti-Semitic comments.

After N.O.R.E. apologized profusely, Rosenberg praised N.O.R.E. for “trying” to “push back” in defense of the Jewish community.

“Oh, believe me I’ve wanted you to edit things from other people’s interviews before, no you don’t,” Rosenberg interjected.

“But guess what, we’re going to start editing!” N.O.R.E. said as Rosenberg laughed. “Rules have changed!”

You can still watch a mirror of the full interview (for the time being) below on Odysee:

Parler announced on Monday that Ye is going to purchase their social media site just to have a voice.

Dementia Joe’s Senility Is Getting Worse