President Joe Biden appeared to get caught vocalizing instructions from a teleprompter during the speech at the White House Monday.

He made the apparent gaffe when urging Americans to sign up for up to $20,000 of student loan relief – while being mindful of fraudsters who might try to cash in on the new program that a congressional scorekeeper estimates could total $400 billion.

‘If you get any questionable calls, please tell us by going to ReportFraud – ReportFraud – d-o-t – FTC.gov,’ Biden said, stumbling over the web site address in what sounded like his latest ‘Ron Burgundy’ mixup.

It was clear he was not meant to spell out the ‘dot’ part of the address. An official White House transcript appended the correct address after Biden’s remark as ‘[ReportFraud.FTC.gov].’

The FTC portion refers to the Federal Trade Commission.

President Joe Biden muffed the web site address of a government website that fields complaints of fraud related to the new student loan debt relief benefit. He spelled out ‘D-O-T,’ drawing more comparisons to Ron Burgundy of the Anchorman series

‘I tell anybody who has — who’s qualifying for these loans, or trying to qualify for these loans. If you get a call pretending they’re from the government trying to help you with your loans, let’s be clear: Hang up. You never have to pay for any federal help from the Student Loan Program,’ Biden said.

Conservative critics ridiculed Biden’s latest gaffe online. The Republican National Committee’s research arm was among the first to jump on the misstatement. 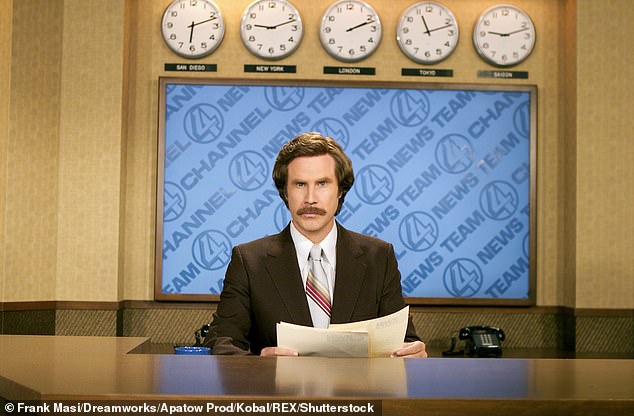 ‘Biden is so gone that he will literally read ANY WORDS they put on the teleprompter in front of him,’ wrote Washington Times columnist Tim Young with a head-smacking icon.

The RNC has been pushing the meme as early as July, when it called out Biden’s tendency to say ‘end of quote’ when reading quotation during prepared remarks.

Biden, 79, made the remark at an event where he said millions of people had already visited a test version of the website where individuals earning less than $125,000 a year can go to secure relief of their student loan debt of up to $10,000.