Democrat sends out thousands of incorrect ballots in high-profile election

In what has to be one of the worst cases of bad timing ever, Katie Hobbs, the Arizona secretary of state responsible for elections who now is running for governor and is on the ballot, mailed out thousands of ballots to voters.

A report from Just the News said Hobbs, a Democrat, blamed the blunder on a computer glitch.

The Republican nominee, Kari Lake, says Hobbs should step aside from overseeing the midterm elections. 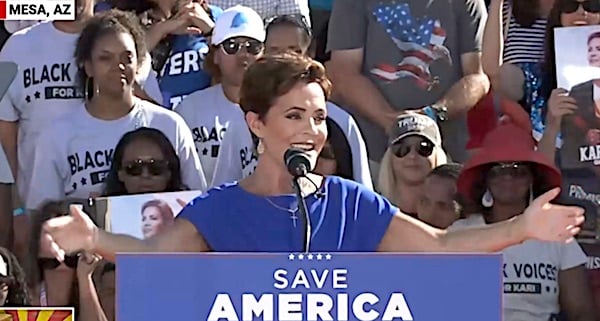 The report said Hobbs admitted that as many as 6,000 voters got ballots listing only federal races.

“Hobbs, whose campaign is staked largely on defending the integrity of the 2020 elections, said Tuesday the mistake was the result of a database glitch,” the report explained. And she said correct ballots will be sent out.

The issue developed as when Arizona residents register to vote, a computer system accesses their driver’s license records to determine if they have proof of citizenship.

No documentation means they are not allowed to vote in state elections, but can in federal votes.

That’s after the Supreme Court ruled Arizona cannot require documentary proof of citizenship for people to vote in national elections.

The state then created two classes of voters: those who vote in all races and those who are allowed only in federal elections.

A report from KTAR said Hobbs “has staked her gubernatorial campaign largely on her staunch defense of the 2020 election in the face of criticism from former President Donald Trump and his allies.”

That report claimed Lake has spread Trump’s claims, charging that they are “unsupported” despite much evidence that several pro-Democrat factors did, indeed, influence the 20 presidential race to the point that many Americans believe they changed the winner from President Trump to Joe Biden.

Those factors include the $400 million plus Mark Zuckerberg handed out, through foundations, to local election officials who often used it to recruit voters from Democrat districts. The other factor was the FBI’s decision to lobby social media companies to suppress accurate, but very damaging, reports about the Biden family just days before the election.

Zuckerberg admitted that he suppressed those reports on Facebook, and Biden won.