It’s no surprise to anybody who has followed politics for the past few years that Stacey Abrams has been a “rising star” in the Democrat Party. I don’t get why the Democrats thought she was such a powerful candidate, but clearly they have invested a lot in her success.

It has been a bad bet. She is going to lose the Georgia election, and by a significant margin.

She lost the 2018 election in what the Democrats claimed was a squeaker, but that was always spin, not fact. She lost by 1.4 points, and spent the subsequent four years claiming that the election was stolen–a claim backed by every Democrat until they decided to label Donald Trump an “election denier” and that tack became inconvenient.

Still, Democrats decided to go all-in on getting Abrams elected this year, perhaps based upon the sunk cost fallacy. They had invested so much political and financial capital in propping her up that they hoped to cash in, despite plenty of evidence that this was a bad investment. Abrams is neither a good candidate nor an appealing person.

One reason for sticking with Abrams is that the Democrats knew that the media had bought into their propaganda and had done enormous work to turn her into an idol.

For God’s sake, Star Trek made her President of Earth and the ultimate symbol of peace, freedom, and democracy: 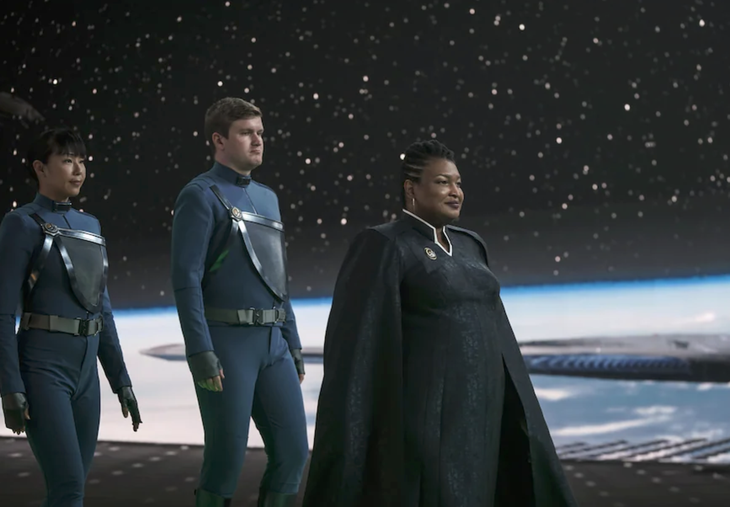 And it is not just the entertainment industry that went all-in on Abrams, the mainstream news media did as well. They are doing everything they can to carry her across the finish line.

Do you have any doubt that the MSM is biased? If so–or for that matter if you just want a good chuckle–watch the opening question from the Abrams/Kemp debate:

“Stacey Abrams, you are so awesome. Why is the public so stupid that they aren’t electing you by acclamation?”

You may recall that before Biden chose Kamala Harris to be his running mate all the buzz was about how great Abrams would be. The media commentators actually thought she would have been a great choice for VP, and there was even buzz about her running for president. She openly campaigned for the job:

The Democrat Party has probably come to the conclusion  by now that the investment in Abrams was a bad bet, despite her outraising her opponent Governor Brian Kemp by a significant margin. The last public report of fundraising has her collecting a staggering $85 million.

Politicos, though, can cut their losses at some point without losing too much credibility. They will be able to blame the loss on Joe Biden and move on.

The media though? They have literally put everything they have into elevating Abrams to iconic status–President of Earth!–and will beclown themselves all the way to the election and beyond insisting that she is something that she is clearly not: smart, articulate, inspiring, and a great defender of Democracy.

She will get trounced on November 8th, and the media will engage in yet another round of naval gazing analysis about how they got things so wrong, and eventually conclude it is because Georgians are racists, sexists, homophobes, and just generally a deplorable bunch of rednecks who would benefit from a dictatorship of the proletariate.

The media is severely broken. They have no ties to the country they report on, and will never understand why they are always being rebuked by the public. Only the threat of bankruptcy could fix them, but I am not certain that the economics actually favor that outcome.

Today’s media business model is to find a slice of the population that they can appeal to and get them absolutely committed to watching/reading you. Appealing to the masses is a fool’s game, so moderation or objectivity is out. Better to have a guaranteed slice of the pie, and farm their psychoses.

MSNBC, despite being absolutely insane, is the 3rd most watched network on basic cable. Their viewers are fanatical precisely because they tell them exactly what they want to hear.

The average American? They have little to no trust in the MSM.

“Just 7% of Americans have ‘a great deal’ of trust and confidence in the media, and 27% have ‘a fair amount,” said Gallup in dishing up the depressing news for media outlets.

“Meanwhile, 28% of U.S. adults say they do not have very much confidence and 38% have none at all in newspapers, TV and radio. Notably, this is the first time that the percentage of Americans with no trust at all in the media is higher than the percentage with a great deal or a fair amount combined,” according to the survey analysis.

Yet it is this same dynamic that creates situations like the one above in the Georgia debate: a grossly out of touch, hyper-partisan “news reporter” making outrageous statements which amount to campaigning for Abrams, and in the process looking like a complete fool.

It turns out that the average voter is not the same demographic as the average MSM consumer.

Johnson will win in Wisconsin. By how much is the only question