NYT/Siena Poll: 59% Of Voters Think MSM Is a “Major Threat” to Democracy

Something tells me that the New York Times wasn’t pleased by the results they got when they asked this question.

Is the mainstream media a major threat, a minor threat, or not a threat to democracy?

Fully 84% of registered voters named the Mainstream Media as a threat to Democracy. Nearly 60% of voters called the MSM a “major threat.”

This is among voters who think that Democracy is under threat at all, which amounts to 71% of the people in the poll. If people don’t think democracy is not under threat (29% of poll respondents) they were not asked this question.

No other issue or group even came close to being seen as this great a threat to the union.

After two years of relentlessly pounding the issue of democracy being under threat the public has come to agree with the liberals and the MSM: yep! Our democracy is under threat and it is you guys in particular who are the most responsible.

As the Washington Post would say, “Democracy Dies in Darkness.” Only the public thinks the darkness is spread by the MSM.

The Left has poured countless dollars and endless hours of propaganda into convincing Americans that Donald Trump, MAGA Republicans, and anybody who would prefer their children to remain unmutilated by the butchers in Children’s Hospitals, the only thing they have succeeded in doing is making normal people hate and distrust them.

Sure, some Democrats buy the hype. Plenty of people named Donald Trump as a threat to Democracy. But even more, by a significant margin, think the MSM is a larger threat. 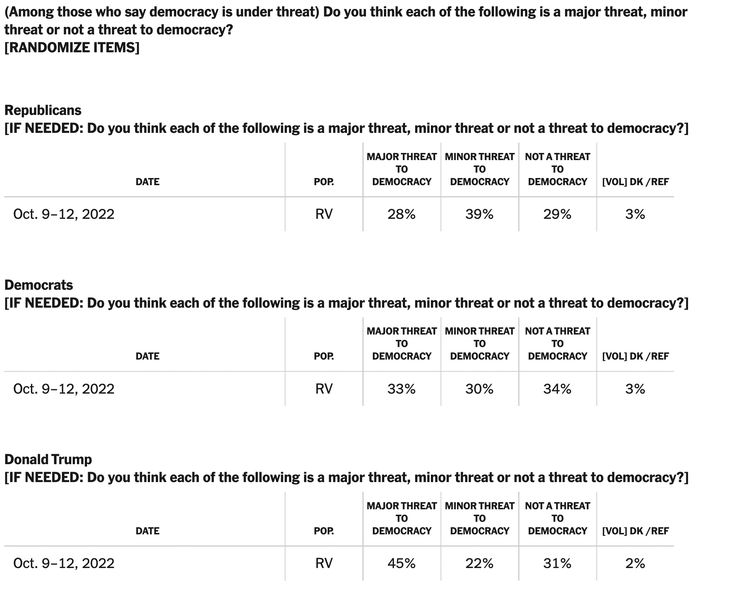 American Military News has a breakdown of the numbers. As you can see, about 30% of Americans don’t believe Democracy is under threat at all, and those people were not included in the tallies above.

Most voters believe “the mainstream media” is a threat to democracy, according to the latest New York Times/Siena poll.

Voters were asked whether they believe “American democracy is currently under threat” or the opposite. Then voters who responded in the affirmative were asked where the blame lies.

Seventy-one percent of voters told pollsters they think democracy is in danger. Of those respondents, 84 percent said the mainstream media is contributing to the political system’s peril.

Fifty-nine percent of those voters said the media is a “major threat to democracy,” while 25 percent said it is a “minor threat.”

Surprisingly both Democrats and Republicans largely agree that the media poses a huge threat to the Republic. While not agreeing on what other aspects of the American political system are creating a danger to our country, the MSM has managed to create peace in the valley on this one issue: the media really really sucks.

Voters for both parties came out in high numbers against the media, according to the detailed breakdown. The fourth estate poses no threat to democracy whatsoever in the opinion of only 29 percent of Democrats, 3 percent of Republicans and 14 percent of independent voters.

Half of Republicans named the federal government as a major threat, while Democrats focused their ire on the Supreme Court and Electoral College.

As much as I despise where the Democrats are politically these days, I would not count my fellow citizens who vote Democrat as a threat to Democracy. Radical Leftists, who are succeeding in bullying Democrat politicians into cowering before the woke gods are indeed a threat to the country, but frankly most politicians of either party are spineless wimps who will go wherever the they are told.

Democrats are voting for evil policies because evil policies are in vogue with their leadership and the most vocal parts of their Party. If they got a memo from a pollster tomorrow that the new “in” thing is funding the police, they will be all over it. If the NYT told them they believe the sky is green, they would take the talking points and run with them. They follow the money and the MSM.

Our problem is less the institutional Democrats than the Leftists in the MSM, academia, and our cultural institutions. They have a stranglehold on the culture, the money, and through their fundraising abilities the Democrat Party. Destroy the institutional Left and the Democrats will return to merely being a normal policy menace. We would still need to outvote them, but they would not be in the business of destroying our country every waking moment.

At least I hope that is the case. Most Democrats aren’t AOC. They are just normal gutless cowards.

So our electoral task is to emasculate the Democrats at the polls, but our existential mission has to be the utter destruction of every Leftist institution out there. The Mainstream Media is at the top of that list, along with Hollywood and the educational establishment at the primary, secondary, and college/university level.

Democrat politicians are creations of those institutions.

In short: vote the Democrats out of office, then relentlessly destroy every Leftist institution out there and salt the earth where they stood.

Beto O’Rourke Is Getting Crushed in the Texas Gubernatorial Race

Ilana Mercer: The Party of Perverts