Volkswagen deserves a medal for this one!

I grew up hating Volkswagens, mainly because I spent far too much time in an orange 1972 VW microbus. We lived in Tucson, and the damn thing had a black interior and no air conditioning. It had about 5 horsepower, a manual transmission, and couldn’t climb a hill without somebody pushing from behind. I hated it.

Later my parents had a Rabbit. It was such a rattletrap that I would occasionally lose power while driving it–it turned out that the carburetor had become loose and had to be screwed back on tightly. It happened multiple times.

But today I stand in solidarity with the fine folks at Volkswagen. They have struck a blow for sanity in an insane world.

Background: Some insane “scientists” decided to glue themselves to the floor of a pavilion to protest the car company’s building cars. Because of course they did.

9 members of #ScientistRebellion remain glued at @Porsche pavilion in @autostadt. Usually @volkswagen lobbies politicians in Berlin & Brussels. Instead, we ask CEO #OliverBlume to lobby for the climate by pushing @OlafScholz & @Wissing to install a speed limit of 100 km/h. pic.twitter.com/tWBrrpcoUr

What is it with protesters and glue? Is it some new gender identity thing I have yet to hear about? If I disagree with these idiots am I adhesophobic? Are they supported by “Big glue?”

In any case, these fine scientists who care deeply about the climate went and glued themselves to the concrete floor of the Porsche Pavilion, surrounded by very nice looking Porsches. Because these Porsches use gasoline and move very fast, they must be surrounded by people in white coats chanting to Gaia.

And these people thought they fit the bill. They can save Gaia through the magic power of glue.

Volkswagen did what every single company being protested by a$$holes should: they shut off the lights, turned off the heat, allowed anybody who wanted to leave to leave, and allowed nobody to come back in.

You want to protest? Fine. You want to be glued to the floor, enjoy your time on the ground. In the dark and cold.

This of course outraged the already outraged protesters, who expected to be dragged off or something in a blaze of publicity. Being publicly humiliated by being left in the dark alone was not in their game plan.

But it gets even better!

.@VW told us that they supported our right to protest, but they refused our request to provide us with a bowl to urinate and defecate in a decent manner while we are glued, and have turned off the heating. People in support can’t get out of the building. 2/ pic.twitter.com/YZuuiww5Q4

Gianluca Grimalda, by the way, is not a scientist, but a “scientist.”

One of his supporters is this guy, who gets involved in nutty things like this. 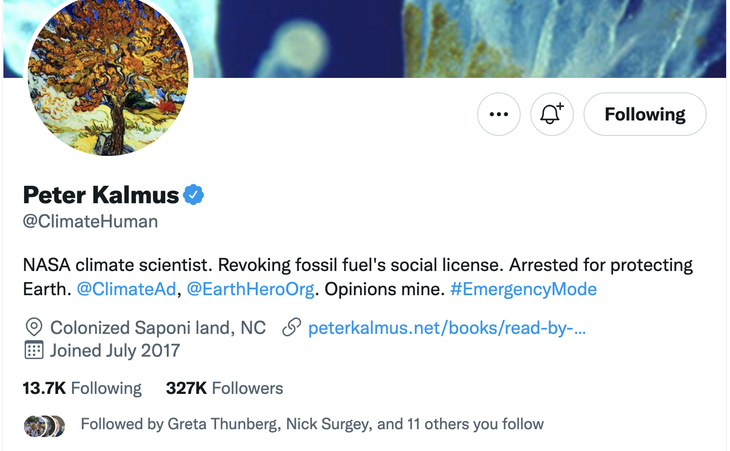 Our NASA scientist went all out in his support for the Scientist Rebellion folks, because of course he did.

We can’t expect our government-employed scientists to behave like adults any more. That is against all the rules of academia. You must be certifiable to get a PhD. 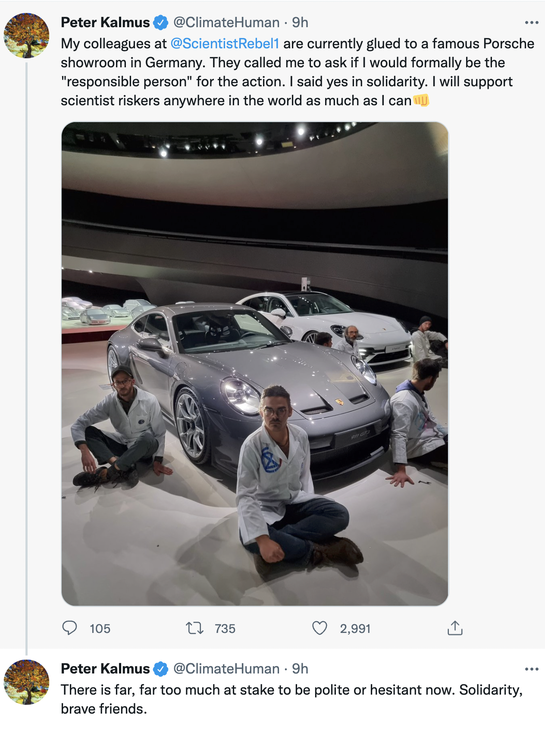 Brave? Oh come on! Does anybody actually expect these guys to get carted off to the Gulag? They went in there expecting Volkswagen to cater their protest and are whining that the company refused to do so. The “bravery” is about as impressive as an over the hill actor trying to rejuvenate their career by coming out as gay.

I love so much all fellow scientists supporting us outside….❤️you don’t know how important this is for us! 4/ pic.twitter.com/h5NUJ8CuXl

Getting ready for first night of sleep inside the Porsche Pavillion @Autostadt to demand @VW to eventually act to decarbonise the transport sector. 5/ pic.twitter.com/0nSiWYtMvU

They are literally being left where they glued themselves to the floor without being able to order the food they want! Better yet, they are being left to stew in their own excrement! Priceless!

What did they expect? Volkswagen to cater their protest and clean up after their mess? Apparently yes. Because of course everybody else has catered to the jerks who pull these stunts.

I hope, but doubt, that the fine folks at Volkswagen stick to their guns. It would be instructive for everybody involved in their idiotic stunts.

These people are literally behaving like children. In fact, children in the Stop Oil Now movement have used precisely this sort of tactic (along with throwing soup) to throw tantrums to bully the rest of us into accommodating their wishes. It is time to stop catering to their obvious mental illness and get them the help they need–inside an asylum.

These people claim to be standing up to evil oppressors destroying the world, but put 100% faith into the decency and generosity of the very people they claim are evil bastards willing to kill the entire planet for a buck.

In other words, they clearly do not actually believe what they are claiming. In fact, they have staked everything on the belief that normal people will tolerate their tantrums and even applaud them for caring so deeply about the Earth.

Poppycock! The best way to deal with people engaged in such asinine behavior is to let them enjoy the consequences of their actions. Turn their ridiculous protest into a hunger strike where the participants stew in their own excrement and enjoy sitting on a concrete floor that doesn’t have the benefit of fossil fuel heating or lighting. Volkswagen is being too kind already by offering them food, even if it is not to their liking. Let them starve until they give in. Sticky fingers update: You can run, but never hide, from the Blue State Tax Man

It’s gotten THIS bad for Democrats