When last we discussed the difficulties barges were encountering whilst trying to make passage on the Mississippi River (Monday as a matter of fact), I noted that the water was fast approaching a record low in Memphis, set a couple of decades ago. It’s fixin’ to tie that record some time today.

According to the National Weather Service Memphis Office, the Mississippi River is projected to tie the all-time record of -10.70 feet, either later today or tonight

The visuals are gobsmacking.

The southern part of the river is well below its “low” level already and, unfortunately for it and the rest of us, there is little to no relief in sight. We are predicted to go into our third consecutive La Niña winter, which means no excess precipitation on the way – in fact, quite the opposite. La Niña usually portends most of the river’s extent will be drier than normal.

During a weak episode, the majority of country should expect winter temperatures to be at or below average. Precipitation is usually hard to come by on both coasts, but communities in the Tennessee and Ohio valleys and northern Rockies typically see an uptick in precipitation.

A moderate La Niña tends to lead to warmer weather in the southern half of the country. During these events, freezes tend to be fewer and farther between in the South. Most of the country sees either normal or drier-than-average conditions, which leads to less rain and snowfall. Exceptions include the Tennessee and Ohio valleys, northern Rockies and the Pacific Northwest. These areas historically have seen above-average precipitation when a moderate La Niña is in control.

…Just under half (47%) of all grain is moved by barge, according to the USDA. Approximately 5.4 million barrels of crude and 35% of thermal coal are moved on the Mississippi.

Those are the figures for a small fraction of what normally moves on the river, and they’ve already lost 20% of that capacity due to low water levels. The Big Muddy looks like it’ll be mostly mud for a good while to come.

While we’re on the subject of water-borne freight, how about those coastal ports? Is anything getting better there?

Actually…no. In a monumental change, the Ports of New York and New Jersey were actually the busiest in the nation in August, after businesses shifted deliveries from the ongoing nightmarish West Coast port debacle.

Historic import and export container processing in the month of August pushed the Port of New York and New Jersey to the No. 1 spot outpacing both the ports of Los Angeles and Long Beach.

This comes as the flow of trade continues to move away from the West Coast with logistics managers worried about a labor strike or lockout. The Port of Los Angeles ranked third in the nation in August, moving 805,314 total containers. That was 37,877 less than the Port of New York and New Jersey, which moved 843,191. The Port of Long Beach came in second, moving 806,940 export and import containers.

But transferring cargo to East Coast ports has also caused its own set of problems. The ports themselves are smaller in scale than either Long Beach or LA, and can’t hold as many ships or get them offloaded and cleared for the next cargo to come in. That is causing significant delays in on-time reliability. In other words, there’s a pretty decent chance that what you ordered may not get to the United States anywhere near the date they quoted you for its arrival. Once your container does arrive, it may sit in the boat for a while.

…As more trade continues to move to the East Coast, congestion at the ports continues to build and the volume of containers heading to warehouses is pushing up prices, even as demand has declined. Savannah leads the East Coast in the number of vessels waiting at anchor. Pop-up yards holding containers off the port are one of the logistics strategies being used to move the boxes out of the port to speed up productivity.

…But for Savannah, which has dozens of vessels waiting at anchor, there are delays which impact vessel schedule reliability.

“The ports like Savannah are full,” said John McQuiston, managing director, global head of originations in the Wells Fargo trade and supply chain finance division. “You have vessels holding inventory while ports process containers. What took days now takes weeks because of the number of containers coming in.” 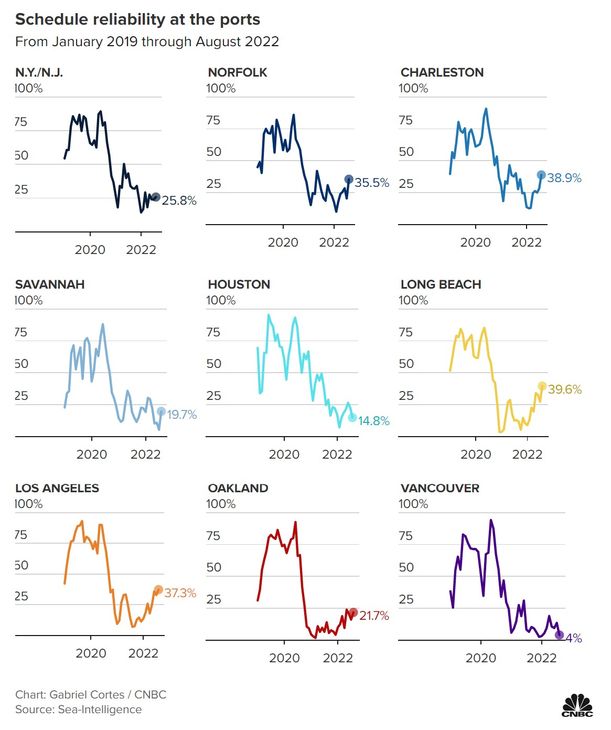 Then the received goods still have to be processed at distribution centers, which are so full already, they’re actually buying 53 ft trailers for storage. If you’re a small retailer waiting for your Christmas order, BUCKLE UP. A good CNBC video with Ben Hagedorn breaks down the space crunch in business storage.

In some bigger markets, there is less than 1% open storage capacity. There’s simply no place to put this stuff, and whoever wants to store it is going to pay dearly.

Then there’s the date – November 19. Why is that date important? Because this could still happen.

…“One of my biggest worries right now with this congestion is a railroad strike knocking out the third leg of transport,” McQuiston said. “The U.S. would have an element of paralysis in certain sectors of the supply chain if there was a rail strike. You do not have enough cabs or drivers to pick up the containers once bound for rail.”

That’s all it would take to send the whole supply infrastructure tumbling down. The railroads and the one union that rejected the contract are still at loggerheads. The unions who had tentatively agreed to a contract were willing to hold off until mid-November while the Brotherhood of Maintenance of Way Employees Division tried to come to an agreement.

The major freight railroads appear unwilling to give track maintenance workers much more than they received in the initial contract they rejected last week, increasing the chances of a strike.

The railroads took the unusual step of issuing a statement late Wednesday rejecting the Brotherhood of Maintenance of Way Employees Division union’s latest request to add paid sick time on top of the 24% raises and $5,000 in bonuses they received in the first five-year deal.

Union Pacific CEO Lance Fritz said Thursday that he thinks the main reason the BMWED rejected its initial contract last week was that the details of improved expense reimbursement in the deal were still being negotiated at UP while workers were voting. So it wasn’t clear exactly what those workers would receive for their travel expenses when they go on the road to repair tracks.

But the threat of a rail strike still means that shippers have to go into contingency planning, just as they did last month, and that snarls the works yet again.

Logistics managers are dusting off their plans for a possible railroad strike in November that could wreak havoc on the supply chain and cost the U.S. economy up to $2 billion a day.

…For many intermodal shipments — shipments that use multiple modes of transport such as ocean, trucking and freight rail — there can be a week between when cargo is picked up and when it makes it onto the rail lines, according to Nightingale.

“That lag time will exacerbate the effects of delays and service interruptions, so effectively managing the risk of intermodal disruption means you must plan early and often,” he said.

…“Shippers don’t want cargo with a limited shelf life sitting at a rail yard, particularly commodities like chemicals and refrigerated food and beverage,” he said.

…“If you are in logistics and you are not already scenario planning for a potential work stoppage you may be behind the curve right now,” said Brian Bourke, chief growth officer of SEKO Logistics. “Everyone is waiting for after the election for any additional movement or news, but the time to start planning is now.”

You’ll notice I haven’t mentioned any administration officials in this post. No, I do not expect Dementia Joe to make it rain, and we’re probably better off with Butthead doing whatever it is he’s doing. Union/rail negotiators are hard-bitten professionals vs anything the White House might trot out, so I left it.

As a friend of mine used to say about lost causes in her syrupy, deep, Southern drawl,

We’ll figure this out on our own.

Oklahoma bans trans medical procedures for those under 26

Today’s deep question: Was Trump right about pro-lifers and the midterms?