Skyrocketing inflation, heating oil shortages, constricted goods flowing on the Mississippi, a possible, crippling rail strike, climbing inventories, out-of-control crime, and on and on…EGADS and little fishes!! Could the immediate future of the country look any more dire under Joe Biden and his thugs dang near criminally inept administration?

There’s a looming diesel shortage, with diesel stockpiles at their lowest record going back darn near 30 years.

The country is down to 25 days of diesel supply with stockpiles at their lowest level for this time of year in records going back to 1993. In the Northeast, where more people burn fuel for home heating than anywhere else in the country, inventories are a third of their typical levels heading into winter. National Economic Council Director Brian Deese called the levels “unacceptably low.” By late October, diesel prices had risen for more than two weeks to 50% above where they were a year ago.

What runs on diesel, besides people’s oil furnaces? Only, like, everything. And the dynamics of this crunch and the prices are pretty interesting as well. Without a doubt, Dementia Joe’s immediate actions upon assuming the throne were the catalyst for the precipitous decline to where we are right now, energy-wise. Period. Everything that has happened in the world since inflaming the energy situation would have been mitigated by our continued energy independence. Biden stripped us of that protection the second he got ahold of one of those fancy pens, and someone told him what to sign.

Biden just now said he’s been “doing everything in my power to reduce gas prices,” but that’s false. He
– slashed acreage for oil/gas production
– killed the re-opening of a major oil refinery
– repressed private investment in oil/gas production by flooding market with SPR oil pic.twitter.com/w6zNyq6SUp

The Biden administration has leased fewer acres for oil-and-gas drilling offshore and on federal land than any other administration in its early stages dating back to the end of World War II, according to a Wall Street Journal analysis.

…and have been debasing themselves and this country, begging for oil and offering exorbitant amounts to pay for it – anything not to have to use our own natural resources. 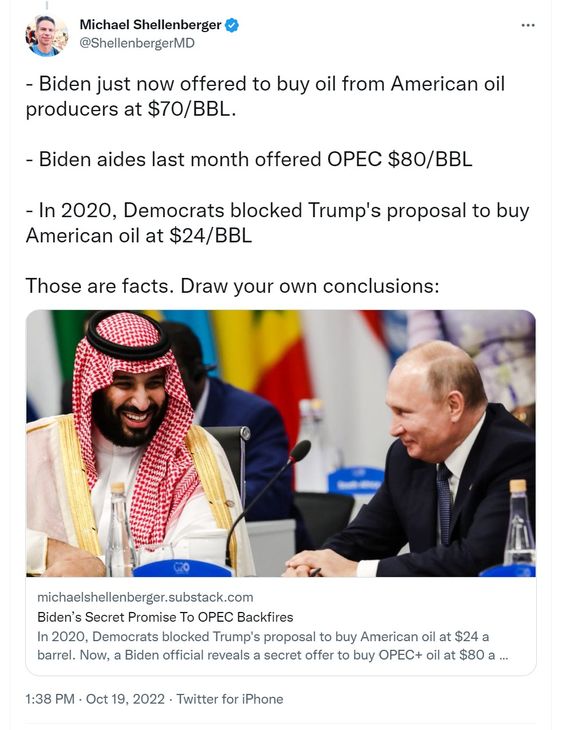 Inventories of diesel are low for a number of those obvious (above, including Ukraine/Russia), and not-so-obvious, reasons. Part of it has been an ongoing lack of refining capability, especially on the East Coast. This would be a self-inflicted wound on their part. I remembered a post I’d written from 2012, where Obama was bemoaning gas prices due to a lack of refining capacity, while HIS EPA was simultaneously shutting down three Pennsylvania refineries. Hello? We are also now in the time of year when refineries close for maintenance as they switch over their seasonal blends to winter – also EPA-mandated – and that crimps supplies available as facilities go offline. Then there’s the lurking Green agenda – changing over existing refineries to create biofuel. Not helpful in the current circumstances, but they will forge ahead destroying us to save the planet for…someone.

…Refiners can’t just ramp up output to meet surging demand, and utilization rates are already above 90%. In the U.S., refining capacity has decreased in recent years. The largest refining complex on the East Coast — Philadelphia Energy Solutions — shut down following a fire in June 2019.

Several refiners are now being reconfigured to make biofuel, which has also reduced capacity.

Some refiners are also undergoing routine maintenance checks that were overdue following the pandemic. These facilities typically run flat out – 24 hours a day, seven days a week – and so at some point the machinery needs to be checked.

The East Coast relies heavily on other areas of the country for refined products, De Haan said. Now, Europe is competing for these same fuels as it turns away from Russia.

Again, the East Coast has to rely on other areas, because they’ve shot themselves in the foot purposefully.

…Diesel supplies have also tightened due to a steady decline in East Coast refining capacity in recent years, which has made the region more reliant on overseas imports, some of which come from across the Atlantic — Europe and Russia.

There is a major fuel pipeline running from the Gulf Coast refiners to East Coast consumers that has been underutilized for another one of those not-so-obvious reasons – the distillate commodity markets. It’s pretty complicated, but I’ll try to streamline the futures game as it stands now. Normally, contracts are based a few months out – they call it a curve structure – where traders try to guess what the oil will be worth in a few months, and structure deliveries based on that number. If their pricing was off, they used to lose a couple of pennies or so per gallon. But now? There’s no “future” in the contracts – they are selling what they have the second they have it, because the potential loss they could take down the road would be huge, and the money now is massive.

Market backwardation — where prompt deliveries are priced at a premium over future deliveries — has made building inventory extremely costly, feeding into a vicious cycle of tight supplies and price spikes.

There’s no lag left in the system. The market is in a vicious “backwardation” cycle. The refined product that would normally spend a couple of weeks in the pipeline going to the East Coast from, say, Beaumont, Texas? Is going straight out the door to Central or South America for big money right now. (Great explanation of “backwardation” and “contango” here.)

In an article from this past May, I found examples of what those “backwardation” prices look like in the diesel market. The money is nuts, and coming our way, regardless.

…Tom Kloza, head of global energy research at OPIS, said that in years past a barrel of diesel typically sold for $10 above the price of crude oil. Today, that differential – known as the crack spread – has surged to a record high above $70.

“It’s become untethered, unmoored, a little bit unhinged. These are prices we’re not used to seeing,” he said, adding that there are large price differences across the U.S.

Kloza said diesel at New York harbor is now trading around $5 per gallon, while jet fuel prices at the harbor, which usually mirrors diesel prices, are around $6.72. That equates to roughly $282 per barrel.

“These are numbers that are not just off the charts. They’re off the walls, out of the building, and maybe out of the solar system,” he said.

…Higher diesel prices is translating to higher profit margins for refiners, who are now incentivized to make as much as they possibly can. At a certain point, this could lead to tightness in the gasoline market, pushing up the high prices consumers are already seeing at the pump.

In the meantime, consumers can expect prices for goods to keep on climbing.

“It’s going to be a double whammy on consumers in the weeks and months ahead as these diesel prices trickle down to the cost of goods — another piece of inflation that’s going to hit consumers,” GasBuddy’s De Haan said, adding that the full impact of the recent surge in prices has yet to be felt.

In the meantime, the geniuses in the WH are talking about releasing a million barrels for the Northeast from their mid-term election piggybank, the Strategic Petroleum Reserve. I saw one quote estimating that amount of oil would last all of six hours.

We are ruled by malevolent clowns.

Where does Delta come into all this, after the commodities and doom and gloom lecture? That’s kind of interesting, too. At the top of the post, where I linked to those three PA refineries being closed in 2012? One of them was the Trainer facility, and it was given an EPA reprieve, of all things. CONOCO-Phillips still wanted to unload it, and Delta Airlines bought it as a hedge against oil prices and jet fuel shortages. They lost their butt owning it for years – as a small refinery fighting the EPA mandates tooth and nail didn’t help – and repeatedly tried to unload it, but, HEY! There’s been a sudden turnaround. Things are looking rosy and they are looking prescient. From April:

Delta will see a benefit of 20 cents per gallon of jet fuel from its refinery, which acts as a hedge against the spike in fuel. In particular, the refinery supplies fuel for Delta’s York operations, but Chief Financial Officer Daniel Janki said Monroe Energy’s output acts as a 40-50 percent fuel hedge across Delta’s network. In the first quarter, the refinery knocked about 7 cents off each gallon of jet fuel Delta consumed.

When Delta first bought the Trainer, Pa., refinery from Conoco Philips — now Philips 66 — in 2012, analyst opinions were mixed. Some argued it was a stroke of genius on the airline’s part, while others said it was too far afield from Delta’s core operations to make sense for an airline with no experience in selling or marketing petroleum products. The years since have been up and down for the refinery but now, with oil prices spiraling up in the wake of the Ukraine war, the refinery is proving its worth.

The refinery generated $1.2 billion in revenue in the first quarter, compared with $48 million in the same quarter in 2019, Delta said in its first-quarter results. About 80 percent of its output is diesel and gasoline, prices of which have surged. “Our Monroe refinery provides a unique benefit, acting as a partial hedge to elevated cracks,” Janki said. “This is especially true with New York Harbor Jet cracks, where our production at Monroe provides 100 percent offset.”

So much so, that they’re going to start converting to the “processing biofuels” scam as well, which will quite literally save them bazillions in EPA aggravation.

…Delta Air Lines’ wholly owned refinery in Trainer, Pennsylvania, will reportedly start receiving shipments of raw materials for the production of renewable fuels, Reuters learned from three sources with knowledge of the matter.

The outlet reported that the airline’s action may signal the start of a new strategy that would, “reduce its environmental liabilities by hundreds of millions of dollars.” It’s being speculated that the move by Delta suggests a tactical shift by the airline’s subsidiary company, Monroe Energy, which has historically been one of the smaller-scale oil refineries pushing the U.S. Environmental Protection Agency (EPA) and the White House to reform current legislation on biofuel.

That’s kind of ironic. Dementia Joe’s artificially created, entirely self-inflicted energy woes to ostensibly move us from fossil fuels have turned the fortunes of a down-on-its-luck refinery on their ear. Has to hurt.

But top off, stock up, and buy flannels. I mean, he’s still out to crush the rest of us. My $.02 on Hunter Biden laptop