Rebekah Jones Redux: Is it Halloween yet?

WELCOME BACK, MY FRIENDS, TO THE SHOW THAT NEVER ENDS!

Oh, well, wow. Just when I was thinking we might make it to Election Day without any more meltdowns – contrary to speculation, she did make it through the single debate intact – Rebekah Jones, somehow the Democratic nominee for the 1st Congressional District in Florida had herself a heckuva day yesterday. And even as close to the deep end as she’s flailed before, she may have bitten off more than she can chew this time. It all started with a series of Tweets from Politico’s Marc Caputo, pointing out a glaring omission – “an incomplete document” – in something Jones had posted on her Instagram site (and for once it wasn’t a video of her). He provided the missing page of said document as well (I’ve added a screencap of the relevant section).

But she’s not showing page 2:

“There is not reasonable cause to believe Respondent subjected Complainant to unlawful whistleblower retaliation” pic.twitter.com/Uxrc9ug0Tc

How curious, right? Perhaps just an oversight on Jones’ part – we all make mistakes, and with the pressure of a major campaign, even sans her enormous…”issues”…things go astray. Being a thorough guy, as well as having been on this story for almost a year, Caputo provides some more background, and everyone thinks that’s the end of it.

Welp. Would that it was only that simple. By George, the cadre of eagle-eyed Twitter sleuths who are always attuned to Rebekah Jones malarkey parsed the two documents and found some Dan Rather/Mary Mapes-ish editing going on. 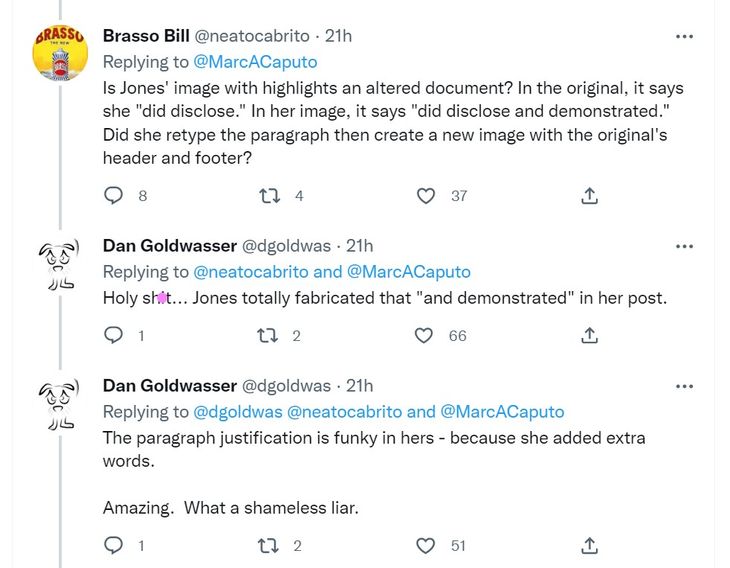 They let Caputo know that, in no uncertain terms, the document Jones had posted as “official” was, in fact, a forgery where the language deviation made the document favorable to Jones’ assertions concerning her COVID whistleblower status. Excuse me, WHUT. Dan Goldwasser, one of the anti-Jones-malarkey types, made an excellent gif to use as an illustration.

Caputo hates nothing more than a liar. He called Jones out with the evidence and ran it by the Florida Commission on Human Rights, which handles whistleblower investigations, to make sure there was no mistake. There wasn’t.

When word hit the Jones campaign (she’s permanently banned from Twitter) the meltdown commenced, with some pretty significant invective thrown at Caputo – enough, in fact, that he used the “libel” word. It’s pretty ugly, and this is just a small sample. 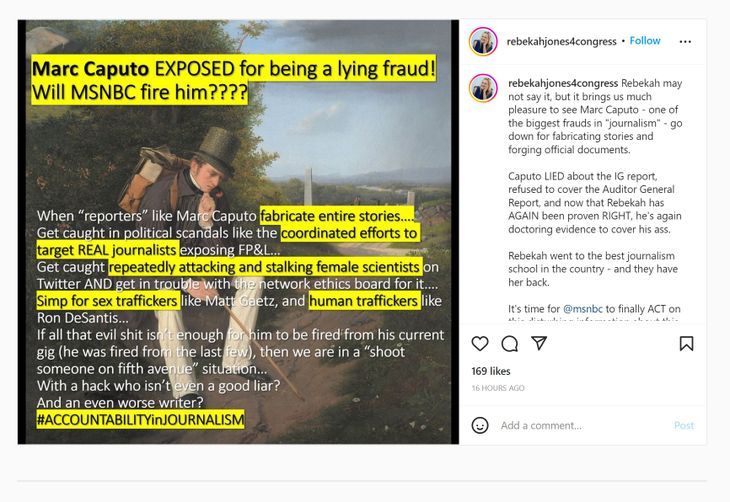 Now, slinging the “child molester” or “creeper/stalker” label as she does repeatedly at people like Matt Gaetz (or the poor fellow who took THE PICTURE) is a low-danger proposition for her. Gaetz is a public official, and she could spout any revolting thing about him – and has – that her loathsome brain could fabricate, and he is powerless to legally retaliate. That’s the price of being a “public” official. Jones runs with abuse to the extreme. On the other hand, the poor guy who inadvertently snapped the picture of her 12-year-old asleep in the tent was slandered as a child molester and “creeper” as well, but what means does he have to fight that? I’m sure he would just like to stay employed, but he’s been viciously libeled across the breadth of the interwebs. There isn’t anything Jones won’t say or do, either lashing out because she’s been called out or for the pure shock value. For instance, that same allegedly autistic 12-year-old son of hers she’s so “protective” of? Who has problems with crowds, people etc? This is what she paraded him around in at a recent downtown Pensacola “Fright Fest” Gallery Night children’s – CHILDREN!!! – event:

Good Lord. Sometimes a stroke victim sounds like a bargain compared to the bunny boiler we’re dealing with here for a candidate. The Democrats have outdone themselves with the ghouls and whack jobs this year.
In any event, let’s recap with a short Rebekah Jones checklist: 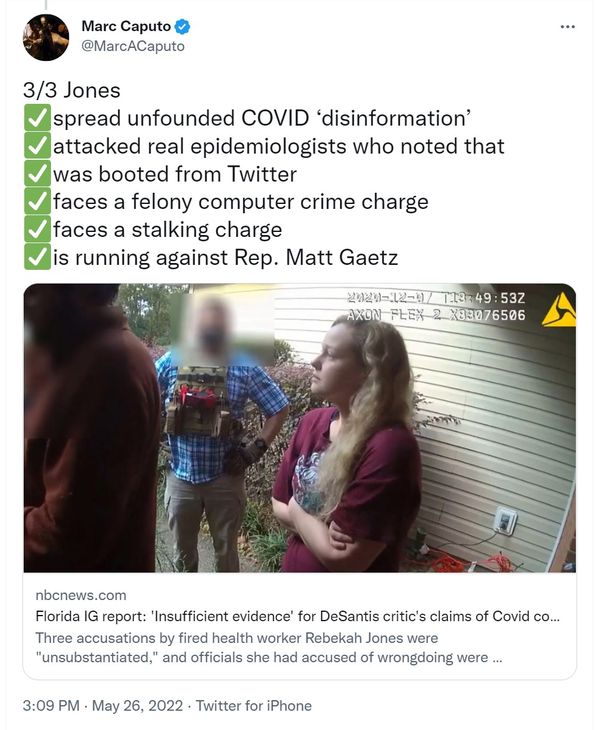 Attorney: Protester evaluating “options” after getting concussed while brandishing incendiary device on NFL field. No, really.

The problem with permitless carry laws