An FBI “cheat sheet” regarding election crimes around the 2022 midterm elections, offering guidance on dealing with “campaign finance” violations, “election interference” and more, also insists that the FBI will decide “disinformation” and whether it is a crime, according to a new report.

It is Project Veritas that has reported on a document turned over by a whistleblower on the FBI’s agenda.

That agency, as Americans know, already has seriously undermined its own integrity by working with Democrats on the “Russia collusion” conspiracy theory lies it launched against President Trump.

Later it used faked evidence to support its requests for permission to spy on the Trump campaign. Some of the FBI’s own employees schemed about how they would not let Trump be president.

And recently it staged an armed raid on Trump’s home in what apparently was a paperwork dispute. The campaign by the FBI, essentially its own disinformation campaign, against Trump coincided with the Democrats’ multiple – and failed – attempts to impeach Trump and remove him from office.

Now Project Veritas has published the “cheat sheet” that explains the FBI is alert for “disinformation,” which would be “False or inaccurate information intended to mislead others. Disinformation campaigns on social media are used to deliberately confuse, trick, or upset the public.”

And regarding “misinformation,” the document said that is “False or misleading information spread mistakenly or unintentionally.”

Is “disinformation” a crime in the eyes of the FBI? 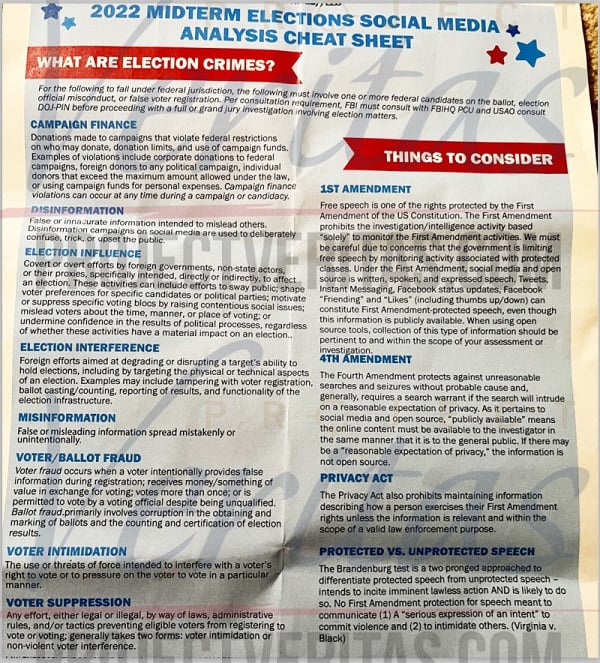 Explained Project Veritas:”The document details how the Bureau will tackle what they consider to be ‘election crimes.’ … These categories could raise questions about who gets to determine what is ‘misinformation’ and/or ‘disinformation.'”

Project Veritas pointed out that Biden recently tried to create a “Disinformation Governance Board” that would impose its views on America, but quickly back down when the scheme became known.

“Disinformation” also has routinely been used by social media to censor statements from conservatives that are factual. For instance, the industry censored the New York Post’s accurate reporting about the laptop computer abandoned by Hunter Biden that revealed what one analysis has suggested is hundreds of violations of the law.

The industry had been lobbied by the FBI to do that censorship. But polls show that censorship almost undoubtedly changed the victor in the 2020 presidential race from President Trump to Joe Biden.

Whistleblower magazine reveals and explores the stunning truth: Soros, an atheist, literally says he’s “some kind of god,” obsessed with re-creating the world in his image. Here are a few actual quotes from Soros: “If truth be known, I carried some rather potent messianic fantasies with me from childhood…” “It is a sort of disease when you consider yourself some kind of god, the creator of everything, but I feel comfortable about it now since I began to live it out.” “You know, in my personal capacity I’m not actually a selfless philanthropic person. I’ve very much self-centered.” “I am kind of a nut who wants to have an impact.” “Next to my fantasies about being God, I also have very strong fantasies of being mad. … I have a lot of madness in my family. So far I have escaped it.”

Except he hasn’t “escaped it.” Not only is Soros totally mad, but he’s imposing his insanity on America. See Soros and the leftwing world he has created and funded as never before in “THE BILLIONAIRE WHO THINKS HE’S ‘GOD’: Why George Soros is obsessed with destroying America.”

Has Google been acting as an arm of the Democratic Party?

Proposal would recognize parental rights to children … even in schools!