Ponder this CNBC headline for a moment, would you?

“BIDEN CAST DOUBTS ON THE CLAIMS” meaning what? As a wizened sage of my acquaintance just put it, the CNBC lede can read “Biden disagrees with Putin, says there are reasons to use Nukes,” right? It’s either that or Biden goading Putin to use nukes, isn’t it? YMMV.

…Western and Russian leaders exchanged claims and accusations over each other’s willingness to use nuclear weapons, with U.S. President Joe Biden expressing skepticism over Russian President Vladimir Putin’s remarks that Russia had “no need” to deploy such weapons in Ukraine.

Whose country is Biden president of again? Someone remind him, please – he tends to lose the bubble, and HOO, BOY, now is not the time. Is he unwilling and/or unable to ratchet down the rhetoric when given the opening? To one of my admitted sorry foreign policy chops, cooler temperatures are better in these circumstances while, of course, keeping a wary eye on the other side.

…Meanwhile, the Kremlin continues to allege that Ukraine is preparing to use a radioactive “dirty bomb” on its own territory and blame it on Russia, a claim that Ukrainian and Western leaders denounce as baseless lies and a pretext to escalate the conflict.

I’m not the only one who noticed the lack of enthusiasm for nukes, suddenly. My brilliant friend Laughing Wolf took a hard parse at Putin’s speech, and stroked his chin…

A Most Interesting Speech

…Again, note what he didn’t say in the speech. There was effectively no bluff, no threats, even almost an avoidance of direct talk of the war. It was not truly brought up until the Q&A. Now that got interesting, and again much of this was aimed internal, not external (save to useful idiots). The idea that Vladimir and Russia have NEVER threatened use, only hinted, was part of a well-laid campaign. Note how he brought up the threats from the British, which is going to play well in some quarters. The Slavophile dislike of the Brits showed through, just as it has throughout the invasion. Worth noting that they’ve gone after Great Britain more than they have the U.S. by a good margin. Leaving aside the hapless Truss, Vladimir was almost gentle in pointing out the threats of Biden. Which, given that the demented meat puppet and his incompetent Regency have chewed their shoes with their feet still in them almost continuously, is something.

…The key on all for now is the Donbas. Vladimir made that very plain yesterday. From historical claims on up, the Donbas now is at the heart of the issue. Which is why I say that what Vladimir wants may not be acceptable to all. What is needed for “peace” was made very clear by Vladimir yesterday. Which means that on the one hand we may have an opening to standing down the nuclear viper, and conversely we are in even greater danger than before. Now we know for sure the physical location of the schwerpunkt, and have a better idea of the philosophical schwerpunkts in play.

What have 81Mlol voters done to us? Holy crap. We already have a mushroom head, we don’t need a mushroom cloud, but dang if he isn’t doing his darndest to get one hanging over what’s left of Eastern Europe. Dial it back, dude and, for God’s sake, pay attention.

Speaking of mushrooms and alternate reality, that same Biden president fellow gave a little speech yesterday in his usual folksy, boastful way. The reception afterward was, well, probably not what he hoped it would be if anyone broke it to him.

Inflation when taking office: 1.4%; Now: 8.3%; Wages not keeping up with inflation; Price of gas when taking office: $2.39, currently $3.84. The audacity is truly something to behold as fact-checkers continue their 22-month Spring Break. https://t.co/lhb6w0lWv4

A hiccup or two with a number one way or the other, and they’re all over a guy.

…Traveling in upstate New York on Thursday, Mr. Biden claimed that the “most common price of gas in America” was $5 per gallon when he became president.

“Today, the most common price of a gas in America is $3.39, down from over $5 when I took office,” Mr. Biden said. “We need to keep making that progress.”

However, the average price per gallon that he inherited in January 2021 was less than half of $5 per gallon — just $2.42, a number that has risen steeply under his tenure.

…The current average price per gallon is $3.76, according to AAA, still significantly more than both the $3.39 the president cited and the $2.42 he inherited.

The French Lady should be tapdancing and binder page flipping like crazy if she holds a press conference today. It’s gonna be a doozy. Or Doocey. Listeners to the same speech also wound up stomping away on reminiscences as precious as college days and cherished memories of young love…

Joe Biden claims that he gave up a starting spot on the University of Delaware football team to visit his first wife every weekend after he met her. pic.twitter.com/c6cdGnhdUV 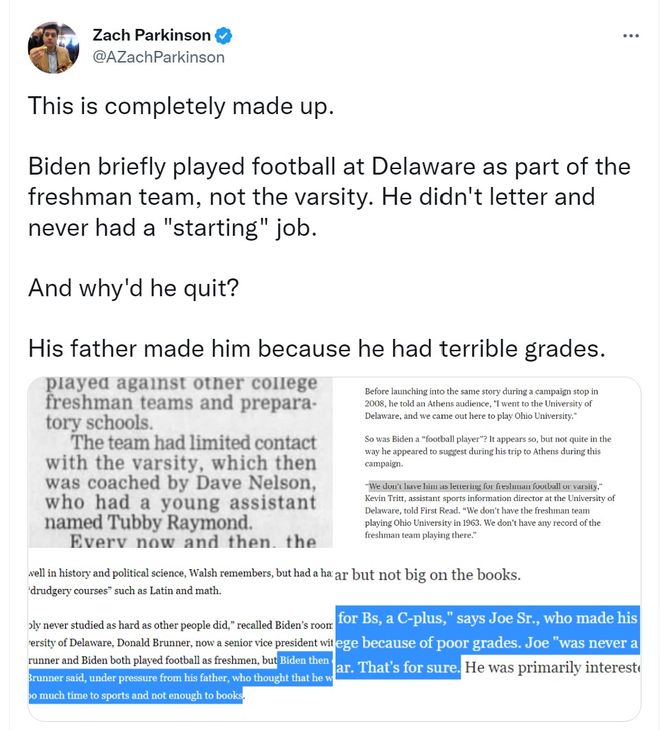 That GPA, for the record, was stellar.

…Biden was a solid athlete during his high school career in Pennsylvania, but his days with the Blue Hens have been murky. Biden wrote in his memoir, “Promises to Keep,” in 2008 that he quit football after the fall season in 1963 to focus on his studies. According to the Daily Pennsylvanian, he had a 1.9 GPA at the time.

How about we all roll out and do everything we can to get every single Republican elected that we possibly can? I’m a big proponent of passing good news, too – like all the posts here at HotAir we’ve done on candidates in unlikely places surging and the terrific stories of this new crowd of outstanding young Republicans rising. I mean, we really have reasons to be charged up, and so many people aren’t aware of half of it. The gruesome fact is we’re trapped for two more years with this not-in-his-full-capacity titular head of state. We have to make sure we do our damnedest to have the legislative branch holding the Republic together in the meantime.