The empire strikes back

European regulators are flipping the bird at Elon Musk.

(Sorry, I had to do that. It was just sitting there waiting to be used.)

Free speech advocates–of whom there are not enough–and conservatives–of whom the ranks are growing daily, I hope–are celebrating Elon Musk’s now complete takeover of Twitter.

Elon is so concerned about the actual employees of his new company that he locked out Twitter’s Leftist engineers and has his own Tesla engineers combing the algorithms to ensure that sabotage isn’t taking place.

MSM/Democrat Twitter is awash in Leftist tears, and they taste great to those of us who want to enjoy a glass of schadenfreude to ring in the weekend. Seeing a liberal tantrum in progress is fascinating in the way that videos of building implosions are. Wow. Just wow. The destruction is amazing.

Elon Musk now in charge of Twitter, CEO and CFO have left and will not return. Twitter will be delisted from NYSE tomorrow—it’s now the private domain of one all-powerful person. God save @Twitter and humanity. https://t.co/XI9cQBNZyD

But before we sit back and celebrate complete victory, know this: the Establishment™ still rules the world and they are not going to just sit back and let freedom ring. It’s neither their style, nor their inclination given how desperate they are to control The Narrative™. They still need the implicit cooperation of the plebs to move forward with their plan to replace meat with crickets and shut down the supply of energy. Allowing free speech on Twitter is not in their plans.

So European regulators are flexing their muscles and getting ready to take on Elon, and they have some powerful tools at their disposal.

A top European Union official fired off a fresh warning to Elon Musk about complying with the bloc’s new rules on social-media moderation after the billionaire completed his $44 billion deal to buy Twitter Inc.

Mr. Musk has said that he views Twitter as an important platform for free speech. After closing the deal and firing some of Twitter’s top executives on Thursday, Mr. Musk tweeted that “the bird is freed” a reference to the company, whose logo is a blue bird.

“In Europe, the bird will fly by our rules,” Mr. Breton wrote on Twitter, adding an image of the European flag.

That tweet captures the attitude of the Establishment™ succinctly. If you are committed to freedom for the masses, you are public enemy #1.

In Europe, the bird will fly by our 🇪🇺 rules.#DSA https://t.co/95W3qzYsal

The Digital Services Act, which was agreed to by EU lawmakers in April, seeks to compel social-media platforms to quickly deal with illegal content when they become aware of it and offer users a way to complain if they disagree with content-moderation decisions. Large platforms would also have to show they are taking steps to handle the risks that regulators believe some legal content may present.

Fines for violating the rules could reach up to 6% of a major platform’s global revenue once the legislation takes effect in late 2023 and early 2024.

Yet taking on Elon Musk may prove more difficult than the Europeans think, for a few reasons. First of all, Europe, while an important market by any estimation, is not the heart of the world’s economy. Should the Europeans follow through on their threats to throttle free speech, Musk just might abandon the market. This isn’t as absurd as it first seems.

First, access to the Internet is more difficult to control in countries that are even modestly free. People can use virtual private networks, for instance, that can fool servers into believing that they are in some other country. And, more importantly, as Musk has proven in his support of Ukraine’s war effort with Starlink, it is increasingly possible to evade the network controls that a country may try to impose.

Musk owns and operates a bunch of satellites that deliver internet access. It is literally a threat over the heads of the regulators.

Were the United States to try restricting Twitter, the rules might stick. But if it is just the E.U., those governments might find that their market and political might are not a match to Musk’s ingenuity and his willingness to thumb his nose at the powers-that-be.

Obviously the EU may escalate their war on Musk and go directly after his cash cow Tesla, one of the most valuable companies in the world, but that has downsides. Tesla manufactures cars in Europe–Germany, in fact–and Germans play an outsized role in European politics and its economy. Germany may be reluctant to go after a major manufacturer during an economic crisis.

Musk is not a member of the Davos crowd in a way that Jeff Bezos is, for instance. He has implicitly declared war on their vision of a constrained humanity limited by the “benevolent” guidance of the transnational elite. And, in turn, they have declared war on him.

In this battle for the soul of the West I have been a Debbie Downer–I see the forces of totalitarianism on the march and fear that the power they wield is unstoppable. I still do fear that. But in the battle for Twitter’s freedom, at least, I have some hope. Unlike every other spineless CEO in the world Musk seems immune to the criticism and fearless in taking on the powers-that-be. He is relentlessly optimistic, appears to be genuine in his love of humanity. His fearlessness matched with his wealth and ingenuity give him a kind of superpower. It is no wonder that many people assume that Tony Stark (Iron Man) is partly modeled on Musk.

He just doesn’t care what they think. That is liberating.

Let’s hope he liberates the rest of us in his battle with the Davos devotees. 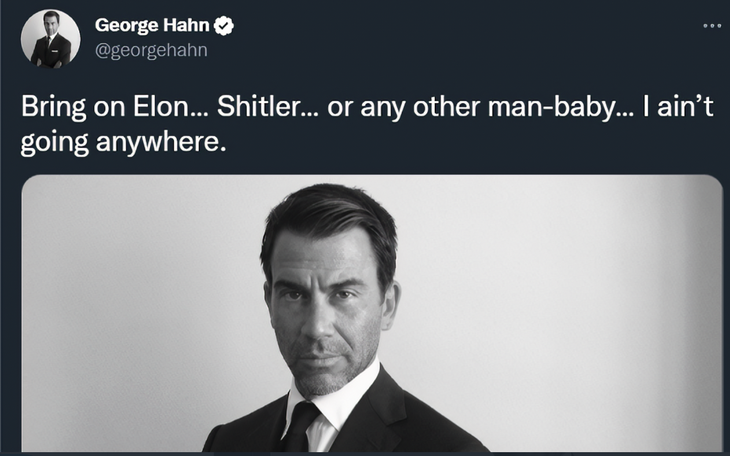 Project Veritas: Pfizer isn’t going to like this at all

Twitter: So long Kanye, we knew Ye too well

California is being hit by a ‘bomb cyclone’