On Pelosi: We’re not falling for the “Right Wing Terrorist in the Tailpipe” joke

Dear Mid-Term 2022 voter – this is a public service announcement. The rush to blame the Right for words = violence in the aftermath of the awful attack on Speaker Nancy Pelosi’s husband Paul is looking even more cynical than it usually is when they whip out the blame card, so please hold your judgment for a day or so. Events and reports from the scene are shifting rapidly. The possibility the cynical Democratic card is being played more as a distraction from the true situation, vice an accusation of fault, looks stronger every passing hour..

The whole thing is shaping up to be is tres strange, even for San Francisco. Let’s recap.

Friday morning word came that the pretty unthinkable had happened – an assailant had broken into the Pelosis’ San Francisco mansion and brutally assaulted the Speaker’s husband Paul. Immediate wishes for his good health and a swift recovery flowed from everyone – Paul Pelosi is not a young man, so it was even more concerning on that front. Details were few and sketchy at first.

The Speaker wasn’t home at the time, and the seeming lack of security at the Pelosi home already had some folks (who were very familiar with the area and its well-to-do residents) stroking their chins, but assuming there’d be lots of video to help with the investigation.

We have been to many social events in the immediate vicinity as well. There are security cameras everywhere, and many homes have private security. Whatever happened, law enforcement should have plenty of evidence to get to the bottom of it and find the attacker(s).

San Francisco Police finally had a press conference and said they’d arrived answering a “welfare check” call. Initially, they muddied the water with their phraseology about officers finding “both men holding a hammer” and most listeners interpreted that as each man had a hammer. In fact, there was only one hammer, and they each had ahold of it. The suspect, identified as David DePape and wearing only underwear, wrested the hammer from Paul Pelosi and, in front of the officers, then proceeded to inflict grievous wounds on him, including a skull fracture that required immediate surgery (please heal quickly, dude) before officers could control the situation.

MORE: “The suspect was arrested in his underwear” and authorities have found an anti-government manifesto pic.twitter.com/DjilWBP5NH

The Left went into overdrive. They are so cynical, and ruthlessly, calculatingly predictable. Any tragedy is an opportunity to score points and sound bites before the facts shut down the opening.

The Left has normalized demonizing the Right for the Left’s violence. https://t.co/wOdpipTCIf

The Democratic media protection machine cranked into operation as well, deciding what nuggets of early information about the suspect might be too sensitive for the public to know. (Or too damaging to the Pelosis…? YMMV) The producer of one local station made that call post-press conference for a local reporter. The reporter asking for guidance before broadcasting was caught on a hot mic.

On the phone with boss:

“Hey so is this the dude that is a former nudist dude?”

“Yea okay, is it okay to say any of that stuff?”

Take Saturday night’s CBS Evening News broadcast: while their transcript leaves out the reference to January 6th made on air (a really slick touch), it does contain all the standard overwrought pablum about domestic terrorists and the mid-terms.

“There’s too much violence, political violence, too much hatred, too much vitriol,” Mr. Biden said, also noting that he spoke to Nancy Pelosi by phone, and that she was in good spirits.

The attack on Paul Pelosi occurred less than two weeks before the midterm elections, and as concerns about the possibility of violence by domestic extremists have been raised by U.S., state and local officials.

On the same day as the attack on Paul Pelosi, the U.S. government warned of a “heightened threat” to the midterm contests, fueled by a rise in domestic violent extremism (DVE) and driven by ideological grievances and access to potential targets, according to a joint intelligence bulletin obtained by CBS News.

“DVE” – got that, gang? That’s the new acronym for you, parents or anyone else who dares to ask this group just what in the Sam Hell they think they’re doing with your constitutional freedoms, your children, etc. You will no longer be deplorables, you are DVEs. *so noted* Reuters went straight to the heart of the matter in their report – Donald Trump made him do it.

By extension, anyone expressing support for Trump is a potential terrorist. They’ve worked so hard to set the narrative from the beginning, they completely missed the magnificent Michael Shellenberger doing what is known in the business as “a journalism.” He spent the day talking to the suspect’s neighbors, actually reading vice cherry-picking DePape’s online ramblings and digging into who the guy IS. How inconvenient for the Left (but unsurprising to rational folks) it turns out the fellow is a certifiable psychotic headcase, amplified by a raging drug addiction. Whoda thunk it?

…But DePape’s politics have little rhyme or reason. In past years DePape shared a post about Stephen Colbert’s 2006 roast of President George W. Bush at the White House Correspondents dinner; linked to videos of Disney films altered to make it look like the characters were swearing; and claimed, “Jesus is the anti-Christ” — not exactly a litany of right-wing tropes.

…Neighbors described DePape as a homeless addict with a politics that was, until recently, left-wing, but of secondary importance to his psychotic and paranoid behavior. “What I know about the family is that they’re very radical activists,” said one of DePape’s neighbors, a woman who only gave her first name, Trish. “They seem very left. They are all about the Black Lives Matter movement. Gay pride. But they’re very detached from reality. They have called the cops on several of the neighbors, including us, claiming that we are plotting against them. It’s really weird to see that they are willing to be so aggressive toward somebody else who is also a lefty.”

…Another woman, Linda Schneider, told CNN and Bay Area NBC TV affiliate, KRON4, that she got to know DePape around 2014 and that he was still homeless, living in a storage unit, and using hard drugs. “He (was) likely a mindless follower of something he saw on social media because I don’t think he had the courage to be part of any political or terrorist group,” said Schneider. “His drug use began again and he went off his rocker.”

As we’re watching a clearer portrait of DePape emerge, no thanks to ongoing efforts to paint him as the MAGA cap guy next door, other, curious details are emerging. Adding to the initial confusion concerning the attack was the fact that, during the call to 911 paul Pelosi made from a bathroom in the home, he referred to David DePape as a “friend.”

“RP (reporting person) stated there’s a male in the home and that he’s going to wait for his wife. RP stated that he doesn’t know who the male is but he advised that his name is David and that he is a friend.”
pic.twitter.com/O0HeS0s0I5

San Francisco police credited a dispatcher for having a Sixth Sense about the approximately 2:28 a.m. call and sending police over immediately, which may well have saved Pelosi’s life. But that’s speculation, as a hammer wasn’t swung until police arrived and witnessed the attack. Again, yesterday brought another interesting nugget out, and wait, WHUT?!

A third person? Who is, as of now, still unidentified, was there through the entire event – a witness? If there was another person at the Pelosi residence, why didn’t Paul Pelosi stay safely locked in a bathroom, on the phone to the police? Everything was chill enough, this unnamed individual could just open the door for the cops? And if you’ve seen close-ups of the patio door DePape allegedly broke IN through…well. It raises its own set of questions, as the glass is blown out. Now, I’m not a physics major nor a crime scene investigator, but I am anxious to hear the explanation for that. One could learn something new.

As a cop for 11 yrs in St. Louis I never once worked a burglary where the broken glass and debris at the entry point was OUTSIDE the residence. pic.twitter.com/Fs5DYEuwHp

This is really turning into something… 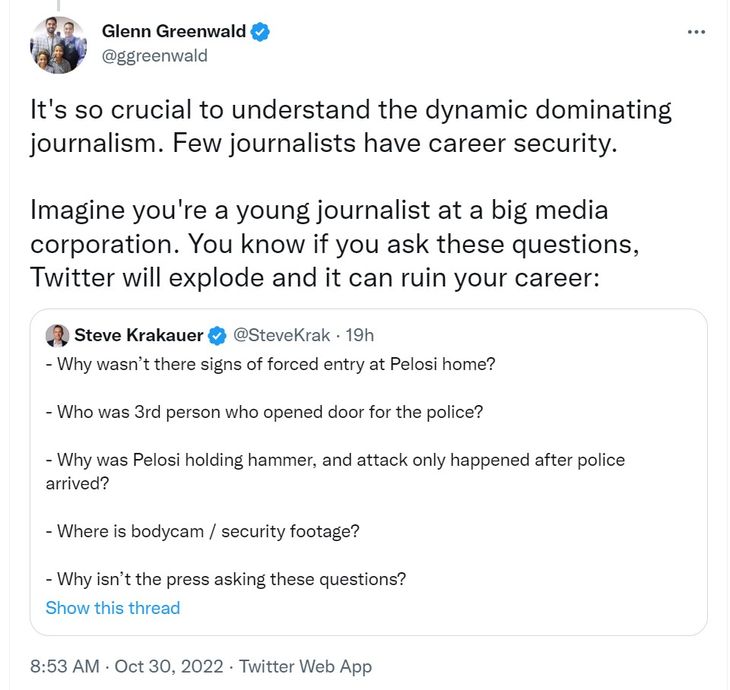 …and it’s NOT a MAGA country attack. Donald Trump didn’t do this, you despising everything Democrats have done to this country in the past 2 years didn’t do this. HO, boy. None of them had anything to do with THIS. But a coming RED WAVE does. And that’s why the Democrats are so desperate to get out in front, paint it MAGA red, and then bury it fast. This has the making of a San Francisco gothic horror and in the age of drag queen children’s shows, government-sanctioned child mutilations and school board protesting parents targeted as terrorists, the last thing the Democrats need 10 days before an epic mid-terms is even the suggestion of a deviant sideshow with a top tier leadership cast.

Do you know why we even have this much information to digest and ruminate on, in spite of their best efforts to bury it?

Thanks to Elon Musk, they no longer control the signal.

All our best wishes for a full and fast recovery to Mr. Pelosi.

Strangling the anaconda: Sanctions on Russia are working