Ed wrote a couple of important posts on this topic yesterday, and I wanted to add my 2 cents.

First you should read Ed here and here. In the first post he outlines The Intercept’s explosive report on how the government continued to pressure social media companies and big tech to censor speech, even after the so-called “Disinformation Governance Board” was disbanded. In the second he explains why we rely on you to help us keep up the fight and to help us avoid censorship.

UPDATE: As I was writing this post Ed generated yet another must-read post on how nobody at the top of the MSM world is covering this bombshell story. The MSM is in full collaboration mode, hawking only the government line.

What struck me about the report was not so much the Biden Administration’s impulse to impose censorship on the American people. All people in power would like to shut their critics up, and the Biden folks have the impulse control of a toddler gobbling candy. Of course they tried to censor us all, and of course they did it for “our own good.” They are fascists, and that is how fascists roll.

No, I am not using that term as a generic insult. They really are doing their best to be fascists. They want the government to control the economy, the infosphere, and even your ability to travel where and when you like. They use the FBI to go after their political enemies, and sic Anitfa on others. They turn the other way when conservatives are terrorized, as in the attacks on crisis pregnancy centers.

Their one great deviation from classical fascism is that they are transnationalists, not nationalists. This is significant, and perhaps we need a new term for this type of ideology besides fascism. But it is of the same class of political ideology–using pressure and force to ensure compliance.

So if I am not surprised that the Biden administration went all in on censorship, what did surprise me about the report? Or if not surprise, at least strike me as particularly interesting?

It was how the big tech companies not only went along with the censorship scheme, but positively begged for help in suppressing any dissent from The Narrative™.

Prior to the 2020 election, tech companies including Twitter, Facebook, Reddit, Discord, Wikipedia, Microsoft, LinkedIn, and Verizon Media met on a monthly basis with the FBI, CISA, and other government representatives. According to NBC News, the meetings were part of an initiative, still ongoing, between the private sector and government to discuss how firms would handle misinformation during the election.

This, in itself, is nothing we didn’t already know. It can even be viewed–not by me, but by more credulous folks, as good corporate citizens trying to make the world a better place.

Yet both Facebook and Twitter bent over backwards to make government censorship easy and efficient. Facebook actually created a special portal–secret, of course–where agents of the government could make takedown requests easily. This is shocking, or at least in a sane world would be. These social media companies actually conspired with the government against what most of us would assume would be considered their customers. They actually called the portal “xtakedowns,” making clear that the government could directly request the takedown of certain posts they don’t like. 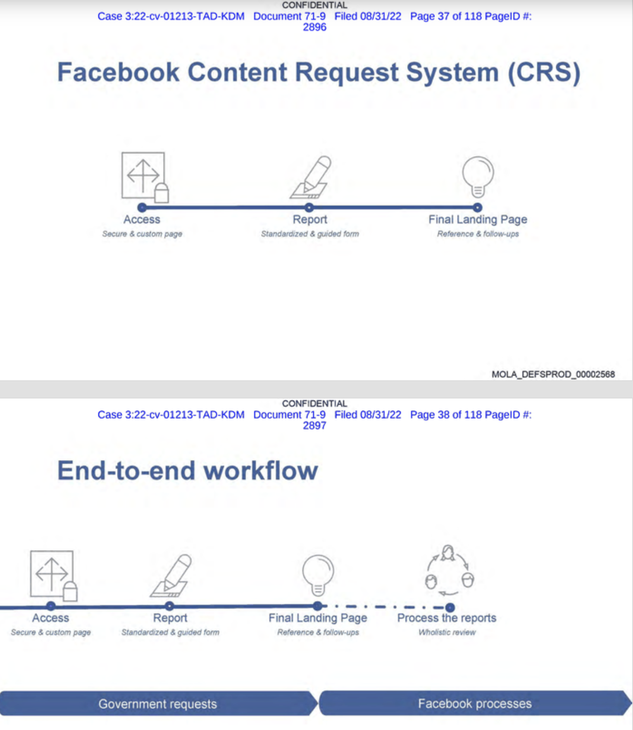 “Platforms have got to get comfortable with gov’t. It’s really interesting how hesitant they remain,” Microsoft executive Matt Masterson, a former DHS official, texted Jen Easterly, a DHS director, in February.

In a March meeting, Laura Dehmlow, an FBI official, warned that the threat of subversive information on social media could undermine support for the U.S. government. Dehmlow, according to notes of the discussion attended by senior executives from Twitter and JPMorgan Chase, stressed that “we need a media infrastructure that is held accountable.”

Hesitant? Any conservative who uses Facebook or Twitter knows how difficult it is to avoid the long arm of the law on social media. And it’s not just ordinary folks like you and me who are censored–dissenting scientists, reporters, and even a sitting President of the United States can be censored or even banned for saying unapproved things. Note, by the way, that JP Morgan Chase was involved, roping in the banking sector into the effort. How scary is that?

You may have missed my article on how JP Morgan Chase cut off the National Committee for Religious Freedom–a new group founded by former Senator Sam Brownback–for no reason other than it challenged The Narrative™. The bank even tried to blackmail the organization.

Remember how even speculating that COVID was created in a lab was censored? It was suppressed for years. Now it is generally agreed that it is more likely than not true. We can say it now, but how many other true things were or are still suppressed because they inconvenience the transnational elite?

I will say it again: there is a reason that the Left is going insane regarding Musk’s takeover of Twitter–and it has nothing to do with hate speech or misinformation. Twitter has always been a cesspool filled with hate–mostly from the Left, but plenty all around–and how much “misinformation” flows there and in the MSM every day?

Disinformation isn’t their worry. It is information contrary to their Narrative. That’s it.

What is scary to me is how cooperative the “private” sector is with government. Banks work against their customers to please the government. Social media companies censor their users. MSM will spread lies to suit the whims of the powerful. Corporations will attack opponents of the regime.

The government acting like tyrants is in their nature. Our defense is a vigorous private sector. Churches, dissenting media, parents, small business. And all of these are now squarely in the sights of the big guys. It is the big corporations backing government tyranny who are the real problem. If there were pushback–as was common until recently in America–there would be stricter limits on what government could actually do.

Those limits have been fading, and that is a disaster for all of us. Let’s hope Elon Musk can reverse the trend, at least in one little corner of the internet.

About those Trump tax returns

Musk: We must “restore public trust” in Twitter as a platform