Democrats Brace for Disaster: With Six Days Until the Midterms, Poll Projection Shows Republicans Taking FOUR Seats in the Senate and Gaining 31 Seats in the House

Democrats brace for disaster: With six days until the midterms, poll projection shows Republicans taking FOUR seats in the Senate and gaining 31 seats in the House

With just six days left until the November 8 midterms, polls show Republicans are enjoying a last-minute wave of voter enthusiasm that could carry them to victory in the Senate and House of Representatives.

The GOP had for months been forecasted to take back the House, but Democrats saw hope in enough Senate races to avoid a foregone conclusion of total defeat.

As of Wednesday, however, that appears to have changed.

Rising crime and concerns about the state of the economy – including inflation – appear to have won out as the top issues for likely voters.

Polls have projected a discontent among Americans with how Democrats have handled both. Though neither party has seemed to net a decisive majority on public trust to stop rising crime and fix the economy, the vast majority of surveys show voters favor the GOP to oversee them.

Republicans are now projected to pick up four seats in the Senate, according to RealClearPolitics, for a total of 54 GOP lawmakers to 46 Democrats – including the two Independents that caucus with the left.

Democrats are not forecasted to pick up any seats, according to the analysis.

Fetterman, the state’s lieutenant governor, had enjoyed a comfortable lead in the polls for months before his one and only debate against Oz last week showed that the Democrat was still struggling with auditory processing and some speech issues caused by a stroke he suffered in May.

And in Ohio, left-wing populist Rep. Tim Ryan had beat initial expectations to run a close race to replace outgoing GOP Senator Rob Portman, but that too seemed to fade as Republican JD Vance surged ahead on voters’ economic concerns.

On the House side, Republicans are forecasted to win 228 races, compared to 174 projected Democratic victories.

That means that even if the left wins all 33 toss-up races, they would still fall short of the 218 threshold needed for a ruling majority in Congress’ lower chamber.

It’s common for the president’s party to face losses in a midterm election. Voters air their frustration with issues, both in and out of the White House’s control, at the ballot box.

But Democrats had enjoyed a boost of momentum over the summer after the Supreme Court overturned federal abortion protections, followed by a surge of enthusiasm among their base when President Joe Biden rolled out his student debt cancellation policy.

Those edges have since dissipated, according to a new survey out by CNN. 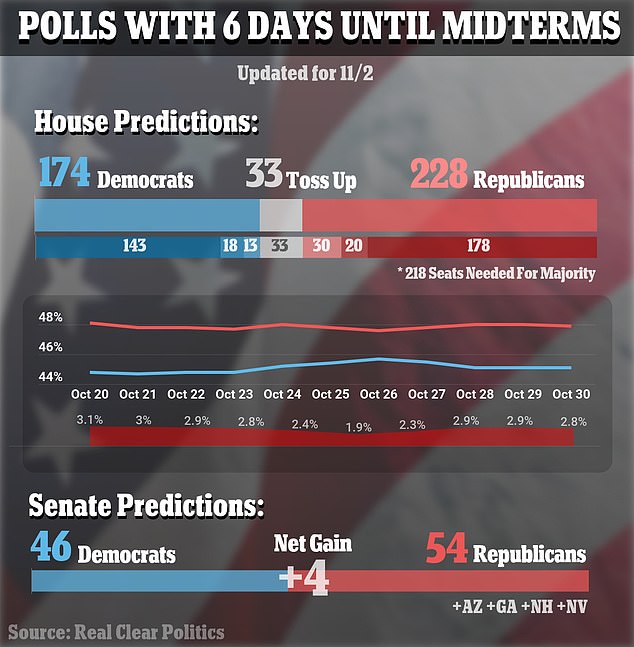 Meanwhile Republicans are expected to have a decisive victory in the House as of Wednesday, with the midterms less than a week away 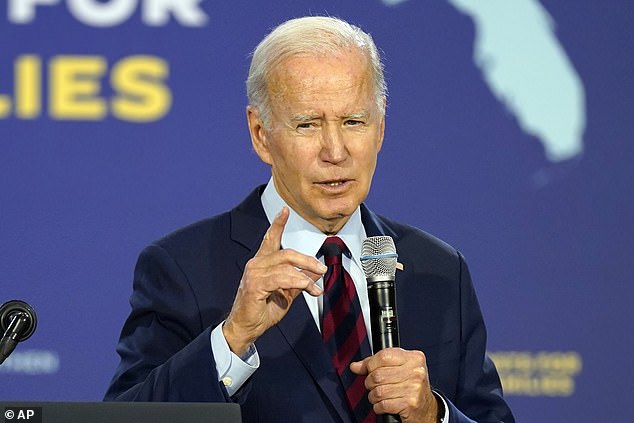 It shows that 51 percent of likely voters would pick a Republican on a generic Congressional ballot, while 47 percent chose Democrats.

The poll was taken between October 26 and 31. An earlier iteration had the parties’ margins nearly flipped.

In September, 50 percent of people said they’d vote for a Democrat and 47 percent sided with the GOP.

Biden himself saw a modest rise in his approval rating, with a new Reuters/Ipsos poll showing that 40 percent of people now support his job in office. That’s compared to 39 percent who said the same before.

It’s still among the lowest levels Biden has seen so far, and is unlikely to couch the blow Democrats are likely to face on November 8.

That’s largely still got to do with persistent dissatisfaction with the economy.

According to CNN’s poll, 75 percent of likely voters believe the country is currently in a recession.

Just over half of likely and registered voters said the economy is the top issue for them at the ballot box this year.

Economic concerns have also pushed suburban white woman toward Republicans in recent weeks, according to the Wall Street Journal.

The voting bloc, which had leaned toward the left – especially after the Supreme Court’s ruling on abortion – now sees economic concerns as the driving issue at the ballot box.

White women living in the suburbs have swayed toward Republicans by 15 points as of Wednesday, reportedly a 27-percent swing away from Democrats.

The demographic makes up roughly 20 percent of the electorate.

Horseback Rider Arrested on Suspicion of DUI in Commiefornia

Devotional: Is Your God Able to Do It?