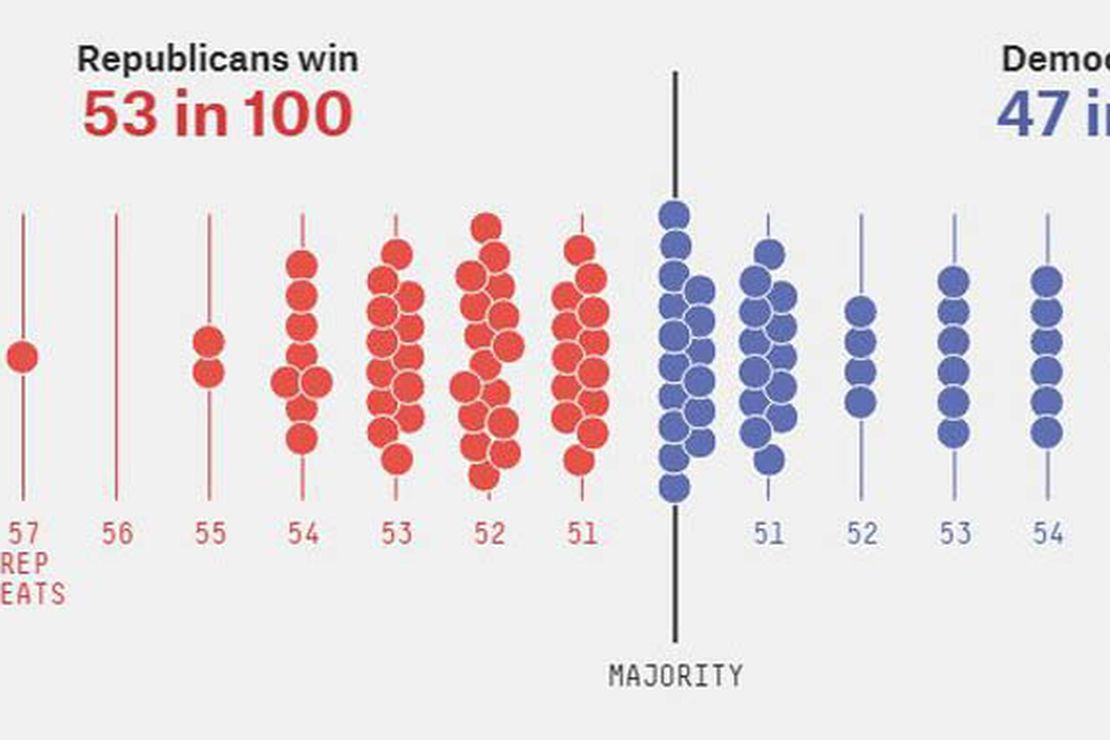 Nearly two weeks ago Nate Silver suggested that even though his model still showed Democrats had a slight advantage to retain the Senate he personally felt it was a dead heat.

If a friend asked me to characterize the Senate race, I’d say “it’s pretty f**king close,” and emphasize that neither party has much of an advantage…

…the main reason why I think of the race for control of the Senate as a toss-up — rather than slightly favoring Democrats — is because there’s been steady movement toward the GOP in our model over the past few weeks. In principle, past movement shouldn’t predict future movement in our forecast and it should instead resemble a random walk. (We put a lot of effort in our modeling into trying to minimize autocorrelation.) This year, though, the forecast has moved in a predictable-seeming way, with a long, slow and steady climb toward Democrats over the summer, and now a consistent shift back toward Republicans.

In short, Silver could see evidence of a clear momentum that was likely to continue carrying things in the GOP direction as election day approached. Now the model has caught up. As of a few moments ago it showed the GOP with a 53-47 edge (see above) but that’s up from yesterday when it was at 51-49. FiveThirtyEight still classifies this as a dead heat but I think the GOP only needs to gain a couple more points before this is considered a slight advantage.

Today, Silver wrote a post about the results in which he held a fictional dialogue with his conservative alter ego. (It’s his site he can do what he wants.)

Republicans reached a milestone on Tuesday, surpassing a 50 percent chance of a Senate takeover in our Deluxe forecast for the first time since July 25. Still, the race for the Senate is about as close as it gets. So I thought it might be worth engaging in a dialog with my alter egos…

Silver: I don’t see how you can be so confident about all of this.

Redd: I’m not confident! I just told you, I don’t know if we’re going to win small or big. But lately I’ve been thinking big. You want to know why?

Silver: I’m sure you’re going to tell me.

Redd: You know my favorite saying? Follow the outfielders, not the ball. When Aaron Judge hits a fly ball, look at what the left fielder is doing. Don’t listen to the crowd, they’re a bunch of idiots. Look at the professionals. The professionals are backing way up, like it’s going to be a big year for Republicans. Look where the campaigns are spending. For Democrats, it’s in blue districts. They have problems in New York. I’m going to ask you about my boy and future New York governor Lee Zeldin in a minute, by the way. They have trouble in California. They’re even sending Biden to Miami-Dade County!

Silver: For a guy who’s as cynical about the media as you are, you’re awfully willing to buy into cherry-picked narratives. I don’t see how there’s any information given away by Biden visiting South Florida, for instance — it’s a swingy part of the country!

I think Silver is whistling past the graveyard on that one. There’s good reason to think Democrats are in deep trouble in Florida. In any case, the dialog wraps up with Silver refusing to take a dinner bet over the GOP winning the Senate:

Silver: I’m going to pass. Our model has it at 50-50, it’s been trending Republican, and you make a couple of semi-persuasive points, like about Pennsylvania.

Redd: Semi-persuasive! That’s the nicest thing you’ve ever said to me, Silver! And good luck on Tuesday, but you won’t need it. It’s going to be an early night.

Silver promised that he’ll also be writing a fictional dialog in which he argues with a Democratic alter ego later this week. How he frames that will depend on how much the average shifts in the next few days.

My take is that Silver’s model has probably caught up to where reality was about 10 days ago. That makes a certain sense because he’s relying on polling which was done a week or two weeks or more ago. But I think where we actually are now is probably a bit better for the GOP in the Senate. Not a huge advantage but definitely an edge with less nearly a week still to go.

Is there any reason to think the GOP momentum will stall or reverse in the last six days? I don’t think so. Democrats are doing their best to shift gears from talking about abortion nonstop to talking about Social Security but it feels a little late to get that message out now. As for control of the House, that’s a done deal.

Humility, Mac Davis, and doing the best that we can: Sunday reflection