If ever there was an omen, this moment at a Fetterman rally Saturday afternoon was it.

John Fetterman’s rally is off to a great start… pic.twitter.com/51UtJQ9cM8

Wowsahs. I don’t know if it was purely the wind that blew them over or the flags were trying to escape having to listen to the anti-American gasbag on the stage with Fetterman.

Former President Barack Obama, campaigning for the first time with Lt. Gov. John Fetterman of Pennsylvania, urged Democratic supporters on Saturday to vote to save democracy and abortion rights. Mr. Obama also mocked Dr. Mehmet Oz, the Republican in the Senate race, as a television pitchman with no interest in helping working people.

Dr. Oz had “answers,” Mr. Obama said, referencing the candidate’s years as host of a TV show that sometimes promoted dubious health advice. But, he added, those answers were the wrong ones.

“You want to lose weight? Take raspberry ketones,’’ Mr. Obama said. “If somebody is willing to peddle snake oil to make a buck, then he’s probably willing to sell snake oil to get elected.”

Obama sure cracks himself up. As always, he had his gaslighting BIC (buncha inflammatory crapola) Flick ready to go…

…In his speech, Mr. Obama outlined the differences between electing Democrats or Republicans on Tuesday. It was a choice, he said, “
between politicians who seem willing to say and do anything to get power, and people who see you and know you and care about you and share your values.”

Mr. Obama laced his speech with examples of how civility, adherence to truth and respect for the political opposition had eroded since he ran for office. He attributed that deterioration to Republicans during Mr. Trump’s presidency.

…and the New York Times is reporting it as rapturously as if the words had tumbled from a saint’s mouth. This article should be considered an in-kind political contribution because it’s not “reporting.” As for the rest of us, we’re well aware of who is willing to do and say anything to stay in power, we have decided we’ve had quite enough, thank you, Dems are just realizing the jig is truly up, and that’s what’s got their party sweating collective bullets over Tuesday’s arrival. They can’t prevent a full-fledged democracy event from breaking out, however much they’d tried to impede and massage it in their favor.

Adding to their consternation in no small way is losing control of one of their major social media organs two weeks prior to such a pivotal election. They no longer control the signal, and they are howling mad about it. Which is all they can do. Where once they were able the stomp on any outbreak of truth or curiosity about dictates from above, their own edicts and snark are now subject to the fact-checking of the flyover country peasants they so despise.

Four days ago the White House tweeted out a chirpy note touting the substantial increase that Social Security checks would see as if it were something – a Biden accomplishment – to celebrate. To their immediate consternation, they were quickly disabused of the notion that this was a wise avenue to pursue.

The fact-checking was so brutal, a flummoxed WH deleted the Tweet entirely, potentially causing its own set of problems for them.

A watchdog group is calling for a federal investigation into a tweet that the White House deleted this week, arguing that the Biden administration may have violated the Presidential Records Act.

…The Nov. 1 tweet is “almost certainly a record that belongs to the public and subject to the Act’s destruction protocol,” the group wrote in a letter sent to the heads of the National Archives and Records Administration and the Office of Government Ethics on Friday.

I said “potentially cause a problem,” because it’s the Biden WH. Not that laws mean anything to these scoundrels, but it’s good to let them know people are watching. Elon Musk, Twitter’s proud new owner, made it quite clear that, henceforth, this is how the game would be played – the House Rules had changed. 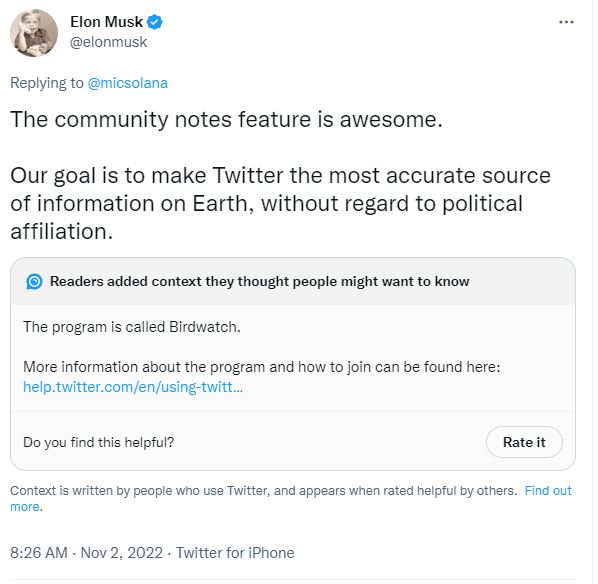 Chief of Staff Ron Klain found that out earlier today. I hope the indignity of it all hurt like the dickens. 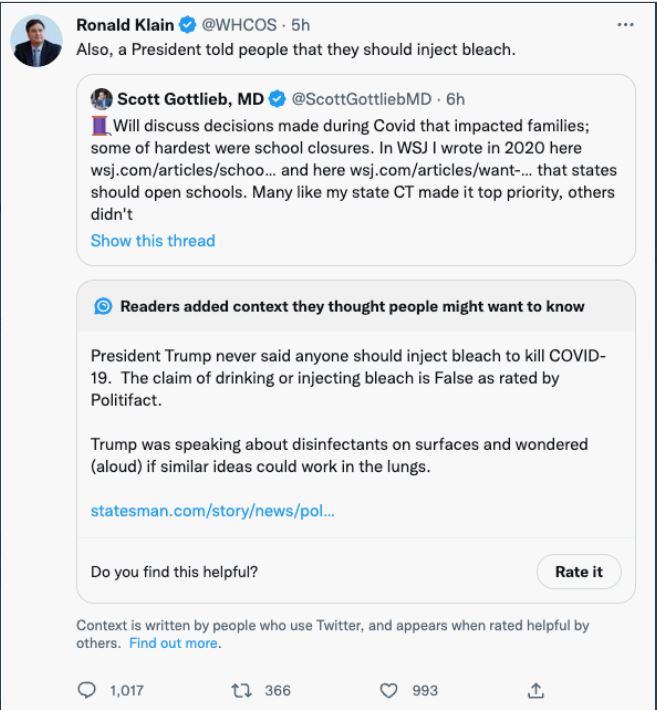 The consequences of this go even further, as one person in the thread noted – what and who can be debunked at will now? Why…anyone and all of it. Liberal heads will be exploding at an exponential pace. So will liberal tropes. 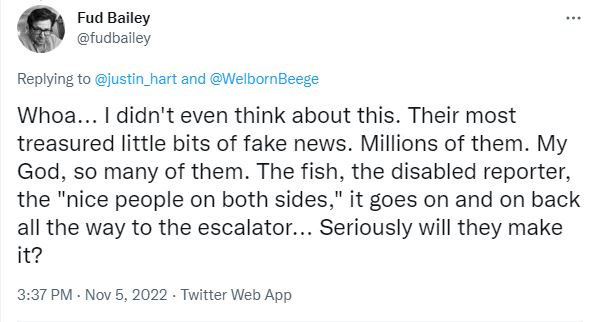 Poof! Up in smoke every single time they get caught. Every time they post it to demonize a candidate, every time they Tweet about Republicans in general, every time they use a vile slur like NAZIS/INSURRECTION/HORSE MEDICINE ad nauseam trying to blow up a thread. It’s now out of their control, and all the reporting hateful behavior in the world won’t help them – those departments at Twitter have, like, two guys left in the room, and they want to keep their jobs however much they’re whining about Elon.

There’s so much change happening so fast and I do not believe Dems are equipped to handle half of it, which is sad when they brought it all on themselves.

Even the cosmos seems to have a beef with Democrats.

The signs were all around long before this.

CNN: ‘It feels like there was a rush to judgment’ on the Duke volleyball story

Wait… we sent *another* congressional delegation to Taiwan already?