FTX now right-wing according to Forbes

I am like a broken record, I know. But when you are right, and desperate to fill up those time slots Ed Morrissey keeps assigning me to fill, you have to keep churning out the content. Besides, I think I churn out pretty darn good content that is worth reading. So there.

In another of the long line of “The Narrative™” posts I give you this:

Forbes’ evidence that she’s a “new darling of the alt-right” is a single quote from an anonymous poster on the site “Urbit” who told them “I definitely think she’s innocent…I think Caroline can be saved.”

That’s literally the extent of the evidence presented in the article. https://t.co/yAUfVy3ekV

I kid you not. FTX–the crypto-fraud firm that just collapsed–is the brainchild of Sam Bankman-Fried, the second largest Democrat donor in the country. He helped find Joe Biden’s campaign, contributing more than any other than our old friend George Soros. He spent $40 million on Democrats, and promised them $1 billion to help win the 2024 presidential campaign. Caroline Ellison is one of his far-too-many sexual partners and roommates.

And now his hand-picked CEO and fellow member of the “polycule” sex collective with Sam the man, is the “darling of the alt-right.” Because some idiot on some site nobody–and I mean nobody–has ever heard of said he thought she might be innocent. One weirdo? This is what they are going with? Urbit? What?

So FTX is actually a Republican scandal. Really. Truly.

What is hilarious about this–actually there are many things hilarious about this–is that FTX is actually a darling of Forbes Magazine, who helped it vault to the top of the crypto world. Forbes hyped the company, hyped Sam Bankman-Fried as a genius, and along with the New York Times turned SBF into a hero, genius inventor. To the extent that Caroline the fraud was enabled, Forbes, Fortune Magazine, and the New York Times were the chief enablers.

The Times even listed Fried right alongside Janet Yellen, Zelensky, and Mark Zuckerberg as a speaker at a conference to be held…next week. After the collapse of the company–and their coverage of the firm’s collapse has been pathetic and sycophantic to SBF. The Times is covering its own ass, and Forbes has decided to do the same. 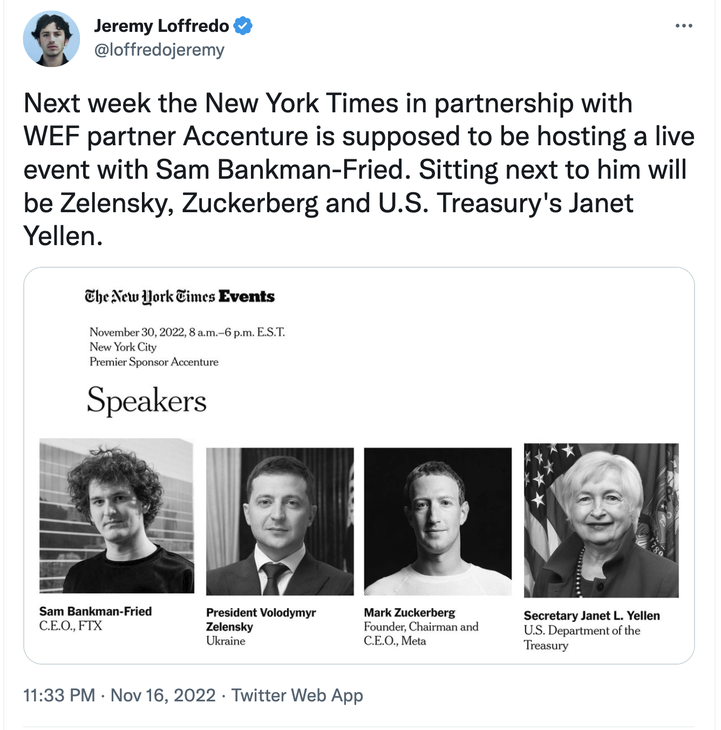 Forbes put him on the cover and did puff pieces about him, praising him to the skies. Nobody–and I mean absolutely nobody nohow noway linked anything having to do with FTX or Alameda Research to the Right. Until Forbes decided to assert it out of the blue today. Wham, bang! FTX is a darling of conservatives! 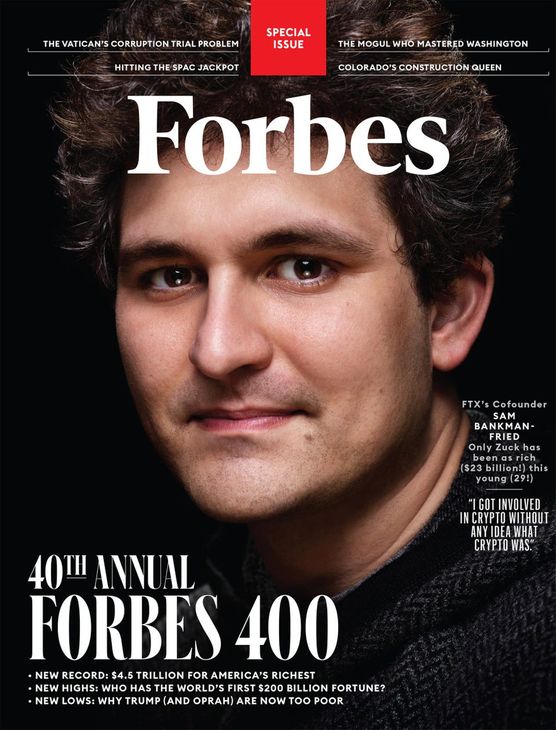 Forbes has the temerity to hang FTX on the “alt-right?” I don’t even quite know what the “alt-right” is except that it is an all-purpose dumping ground for people the Left really really REALLY hates. It is a buzzword for young, snarky conservatives who hate the Left as far as I can tell. They also like frog memes. And, apparently, people who shovel stolen money to Democrats. They love those.

Even in their lame attempt to hang the FTX scandal on the “alt-right” Forbes can’t help but give mad props to (former) Alameda Research CEO Caroline Ellison. She is a “math whiz,” with an “appetite for risk.” When you read the story you almost wouldn’t know that she was the CEO of a company that committed one of the most massive frauds in human history. A fraud that conservatives just love, mind you. Right wing bad bad bad.

Actually, my guess is that they actually were writing a puff piece on her when the scandal broke, and had to repurpose all the sycophantic content while shoehorning in the fact that she was involved in one of the largest financial scandals in human history. Oops. Gotta use that content somehow. And blame conservatives for the bad parts, while also praising her love for philanthropy using stolen cash.

Here, for instance, is a piece of the profile:

In March 2018, Caroline Ellison was working at the quant-trading firm Jane Street when one of her former colleagues approached her with a proposition that would change her life.

Over coffee in California, Sam Bankman-Fried, a disarmingly aloof crypto entrepreneur, pitched her about joining Alameda Research, a new digital currency hedge fund he was working on that would exploit the differences in pricing for Bitcoin in different countries. It was the perfect arbitrage, he said. The exchange would help him toward his goal of “earning to give” billions to charity.

“I was like, wow, that sounds pretty exciting. I mean, I really love Jane Street,” Ellison told Forbes in a previously unpublished interview in October 2021. “It was a really hard decision to leave.”

But Ellison did leave, abandoning her cushy job for a gig at a crypto Icarus that came crashing down in spectacular fashion last week. Behind both Alameda and FTX was Bankman-Fried, a bloviating then-billionaire founder, who had founded the FTX two years after Alameda to build what he considered a modern cryptocurrency exchange. When Bankman-Fried decided to step away from Alameda to focus full-time on the fast-growing FTX, Ellison, a quiet and quirky child of MIT economics professors, took over as co-CEO.

Is this the kind of coverage you would expect of somebody who literally just got revealed to be a bizarre fraud whose entire life-story is nothing but weird sexual fetishes and stealing money? They are treating her as some genius who was led astray. By conservatives or something. Here is the genius Forbes is talking about:

Forbes is owned by a Chinese investing firm, and one has to wonder to what extent they are entangled with this mess. Perhaps not at all, but their cushy coverage even after the implosion, combined with their glowing coverage when FTX was on the way up makes you wonder. They as much as anyone else are responsible for SBF’s rise to prominence–and by inference his ability to shovel cash by the barrel-full to Democrats.

I wrote about this yesterday in a VIP column but in the interest of full disclosure I relied heavily on this article by Ashley Rindsberg at Tablet Magazine. SBF was a creation of the media and the glitterati, including powerful politicians and celebrities. Forbes was a major part of that propaganda campaign.

Is it any surprise that Forbes is trying to tie the FTX scandal to the Right wing? Of course not. They don’t want the Democrats and themselves to take the hit, so claim that it is Republicans’ fault.

These people are so transparent. It would be amusing, except for the fact that lies this big get believed and repeated all the time.

The big lie. The tool the MSM loves best.