They voted themselves in a couple of gems, these New York City folks did. Between actually electing Kathy Hochul to continue her reign of incoherence and incompetence, coupled with their already in-situ fashion plate, empty-suit city chief executive, Big Apple dwellers might as well save time and just beat themselves up.

Emboldened by the election of state and local politicians, a NYC Council bill that had seemed doomed to ashes is experiencing a Phoenix-like rebirth. To his eternal shame, New York City mayor Eric Adams has signaled he is willing to sign it.

What is Mayor Adams willing to sign? THIS abomination.

A controversial bill prohibiting Big Apple landlords from performing criminal background checks on prospective tenants – even those convicted of murder and other heinous crimes – is on a fast track to becoming law.

At least 30 of the City Council’s 51 members have agreed to back the “Fair Chance for Housing Act,” which is set to go before the Council’s Committee on Civil Rights for its first public hearing on Dec. 8, records show.

Right before the election, the former Democratic mayor of Miami Philip Levine told Eric Adams he needed to step up, “button down,” and get serious about the crime and “weak laws” destroying his city.

Welp, NY Dems squeaked through, so no need to act as if that mattered anymore. Besides, the mayor has parties to go to and crime/law stuff doesn’t seem to be his forte. Neither does having a vested interest in the health, safety, and prosperity of the residents of his city.

This is too little, too late from the @nytimes, which amplified the GOP’s “doomsday-style” disinformation campaign. pic.twitter.com/uPW7JSRJOO

WHUT?! “Doomsday disinformation”? Perhaps that’s why the Representative will no longer have a house seat come January (besides the fact, after being redistricted out of his seat – Sean Maloney took it *snicker* – he lost in a primary for the seat he tried to move to) – his grasp of what constitutes “disinformation” is as fluid as any liberal’s.

They couldn’t refute a single crime statistic Zeldin and fellow Republicans ran on, largely successfully, in November. Facts are facts, regardless of Democratic insistence to the contrary. People know what they see every night on the local news and read in the local media. Voters do not appreciate being told their lying eyes do not see what they see plainly, especially as much of it happens in close proximity to them or loved ones.

These politicians in all their appalling hubris obviously took nothing from the election. Not one single message was received that voters were desperately trying to send. Adams is all in on stripping landlords (and their existing tenants) of basic protections because of…what? Empathy? Compassion?

…”No one should be denied housing because they were once engaged with the criminal justice system, plain and simple,” a spokesperson for the mayor’s office told Fox Business in a statement. “We will work closely with our partners in the City Council to ensure this bill has maximum intended impact.”

Never underestimate the horrific “maximum impact” potential of any liberal reform measure. It seems the mayor’s empathy and compassion should be for his law-abiding, tax-paying citizens first, but I guess one doesn’t score SJW points and invitations to swanky galas for taking care of mundane city business.

There are some NYC council members who have the safety of their constituents in mind as opposed to coddling the criminal elements of the city’s population. Councilwoman Inna Vernikov has been one of the most vocal in fighting the measure and trying to ensure public awareness of what the council is attempting to do.

What’s on the menu this Thanksgiving? A bill which would prohibit landlords from conducting criminal background checks of potential tenants. Murdered someone? Beat up your girlfriend? Robbed? Stabbed your neighbor? No problem. Come live among us! Tell the @NYCCouncil to vote NO! pic.twitter.com/xgB2ePWprF

In classic liberal fashion, she was chastised by the bill’s sponsor, Councilman and majority leader Keith Powers, for her message. How dare she harangue constituents on Thanksgiving! Decent people don’t do that.

You can almost hear the *sniff* of disgust.

GAWD, he’s shameless. I wonder what the crime stats are like in his neighborhood?

NYC’s own public housing projects won’t fall under this rule because they have to follow federal guidelines, which include criminal background checks as part of the application process. But there’s another wrinkle in the bill. What about sex offenders?

…The legislation also doesn’t prohibit landlords from checking New York’s sex offender registry to weed out pervs as prospective tenants. But the bill’s current language leaves landlords vulnerable to renting to people who committed sex crimes in other states because out-of-state sex offender registries are not addressed.

Vito Signorile, the spokesman for a 25,000-member rent-stabilization advocacy group, summed it up pretty well.

…He also said members are getting an earful from existing tenants who want no part of sharing buildings with violent or career ex-cons.

At the very least, every last one of those tenants should be blowing the phones off the wall at every single council member’s office. That’s the only thing they might listen to.

Because it’s apparent the council doesn’t see a thing wrong with the way it’s going in the city. 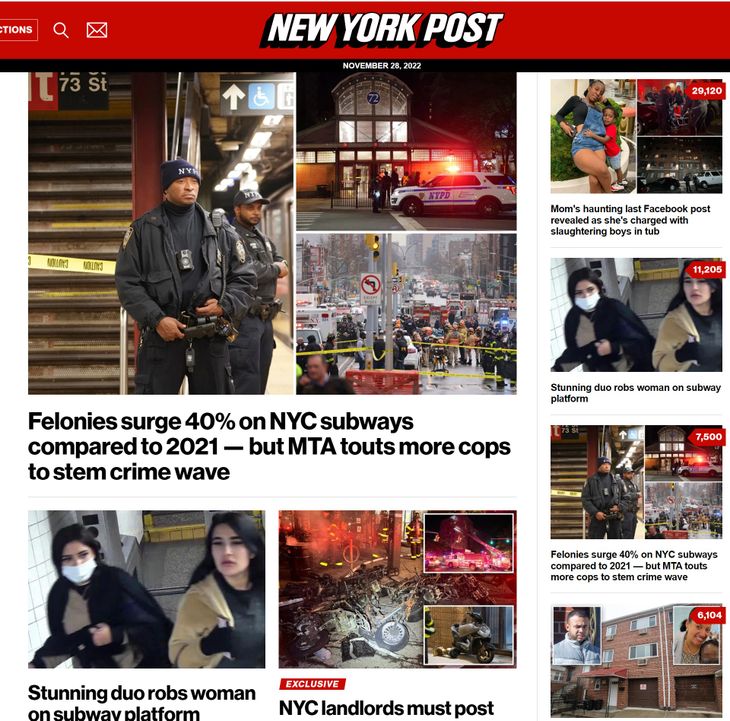 Soft-on-crime Manhattan District Attorney Alvin Bragg has downgraded more than half his felony cases to misdemeanors — while also managing to lose half of the felony cases that do reach court.

Y’all be careful out there. Gallup: the biggest problem facing America is its own government Artificial journalism–as bad as you would expect

Obama to Georgia voters: GOP is the party of “Looney Tunes”, you know