Unlike Matt Walsh, one of my favorite media personalities and humorists, I don’t drop the word “satanic” often. As a Catholic it should be in my vocabulary, but as a person who grew up in an atheist/agnostic family it neither rolls off the tongue nor appears in my thoughts often.

I am, needless to say, a pretty bad Catholic, and a terrible convert. I think in terms of good and evil, but not holy and satanic. In fact, I doubt Satan’s existence. Don’t tell my priest.

Yet there is no appropriate word to use but satanic to describe Balenciaga. And by that I don’t just mean, or even particularly mean, their latest pedophilic campaigns to sell their products. Yes, those are satanic, but barely compare to the evil imagery that lies behind the brand’s chief designer Lotta Volkova.

It turns out that she actually is a Devil worshipper.

A lot of people have been digging into the Balenciaga story because it is both shocking and titillating. It has celebrities, pedophilia, cannibalism, Devil worship, S&M, and high fashion all rolled into one big story. That is sensational, although there is lots of money involved so nobody wants to stop the gravy train. They just want it slowed down so they can taste the meat as well.

Balenciaga has been in full damage control mode, and they were able to get their toadies at the NYT to do a story accusing critics of being Q Anon stooges. This is hardly the case, although once you dig into the story and others you begin to wonder whether the conspiracy theorists aren’t telling the God’s honest truth. Not that I have done any digging into the weird world of Q, because the last thing I need is to go down that rabbit hole. People never seem able to climb back out of it.

How the Balenciaga controversy has become one of the most explicit collisions of internet culture, politics, fashion and conspiracy theories to date. With ⁦@VVFriedman⁩ and ⁦@jtes⁩ https://t.co/WoczAWlzLj

The Times story may help quiet the controversy, because it gives people permission to ignore the underlying truth of the matter. Balenciaga, and hence all those people who love to associate themselves with the brand, are engaged in some kinky, disgusting, and borderline illegal stuff. That isn’t conspiracy talking. That is obviously the case. If you doubt, read on.

At the very least, the people at the top of the organization are disgusting perverts who are pedophile-adjacent, and perhaps even more than that. Balenciaga’s chief designer Lotta Volkova enjoys teasing the idea of cannibalism in her own work. 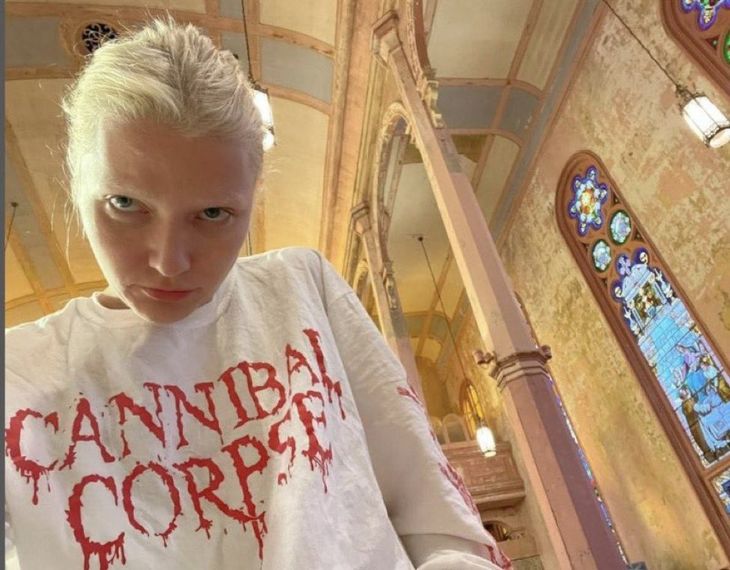 Volkova’s Instagram feed–which unsurprisingly went private as this controversy blew up–is filled with troubling imagery that sexualizes children and celebrates their torture.  This theme has carried through in all her artistic endeavors, and she travels in a social circle that obsesses on the same themes. Others have gone down that rabbit hole, so I won’t follow.

A few images will suffice to give you a flavor of who and what this person is, and it isn’t at all pretty. 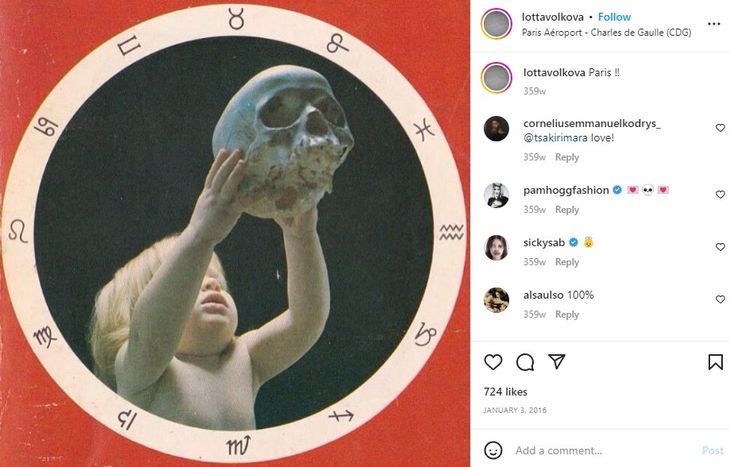 Here is Lotta apparently suggesting she is a cannibal, as you can see in the comments where she tags the photo #canniballotta, referring to herself. And of course that photo in the church with the cannibal corpse T-shirt runs with the same theme.

Dead children with their guts pulled out are a thing, and loved by her Instagram followers. 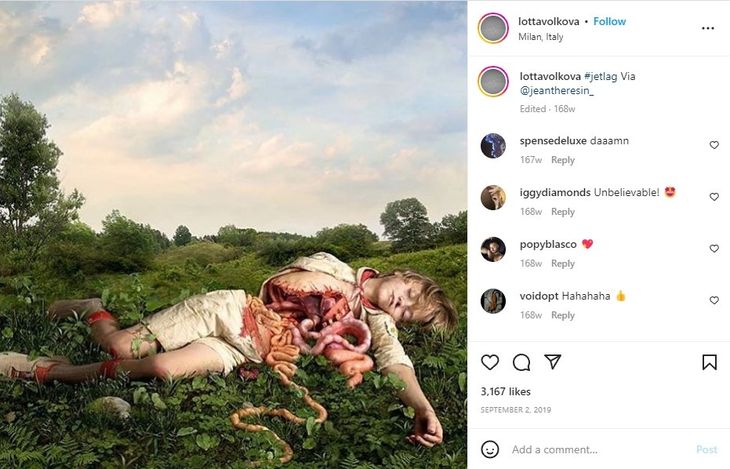 Children and bondage. Who doesn’t think that these go together like strawberries and cream?

Here is nice little pedophilic image of a young girl in a toilet paper dress that apparently was for sale. I assume Volkova designed it. 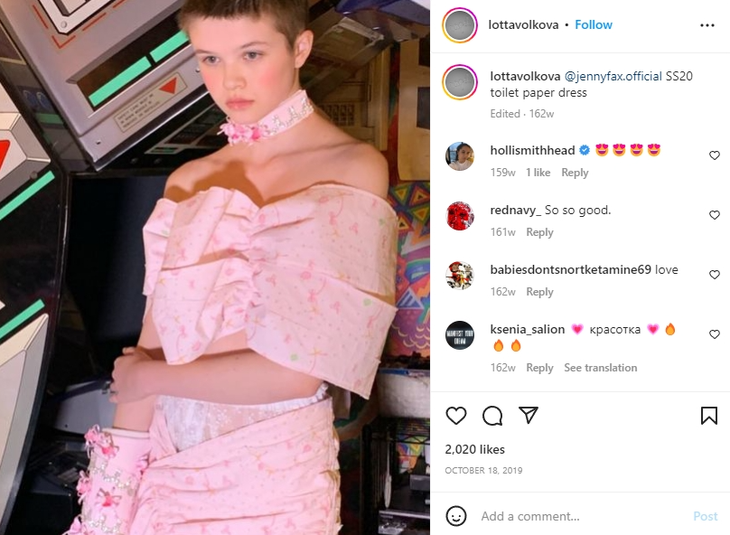 If anybody doubts where the teddy bears in bondage gear came from in those photoshoots, Volkova apparently has a teddy bear violence fetish going on that has clearly bled into her fashion work. Teddy bears, tortured children, and bondage all play heavily in her “art.” 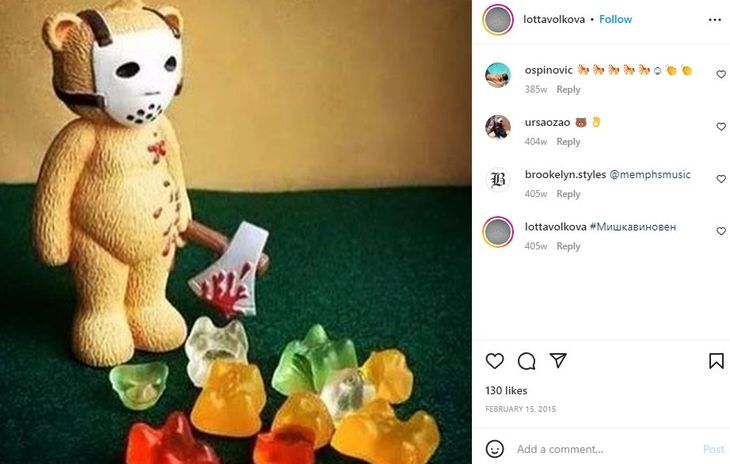 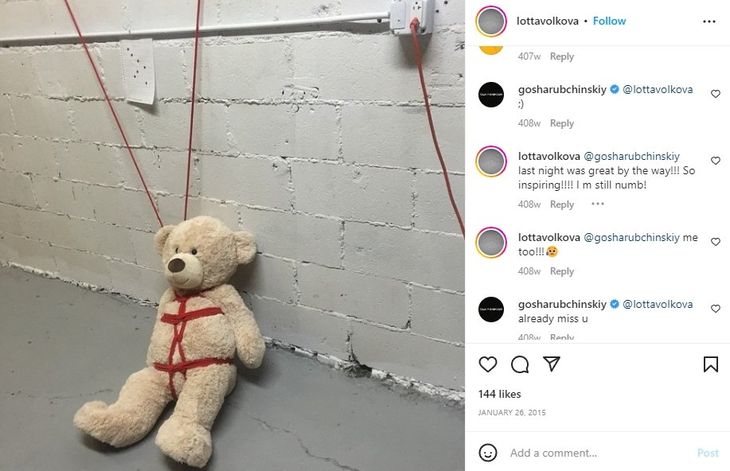 There was nothing “accidental” about those Balenciaga photoshoots and fashion campaigns featuring pedophilic and bondage themed images. This is who she is, and she is the chief designer for the firm. The campaign started at the top. Blaming it on photographers may work to make the controversy go away, but the fact is that they are trying to cover up how sick and disgusting their work actually is. 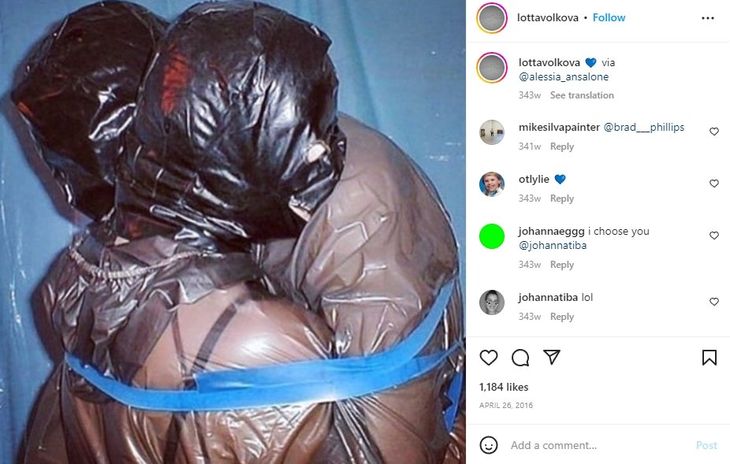 Contrary to what is being asserted in the defense of Balenciaga, Volkova’s obsession with gruesome imagery is not an entirely private affair. It is part and parcel of how she designs and the work she puts out into the world. Including her work as chief designer of Balenciaga.

For instance, Kim Kardashian, who models for and promotes Balenciaga, has gone out into the world in a full leather face mask referencing bondage gear. She even had her daughter in a similar getup. There is no innocence here. This is full blown promotion of…whatever this sort of satanic ideology is. Dressing up a child in bondage-type gear clearly is pedophilic, not innocent in the least.

North West channeled her famous parents Kim Kardashian and Kanye West on Saturday, donning a full leather face mask as she returned to her hotel in Paris.

The nine-year-old is in the City of Lights with her mother, 41, who has been attending Fashion Week.

The fourth grader, who celebrated her birthday in June, kept the rest of her look low-key, wearing an oversized black T-shirt, black and white print pants and thick soled Crocks.

The elementary schooler was following in the fashion footsteps of her mom, who has famously worn a full face mask for her own aesthetic reasons.

While visiting Paris in July, Kim was seen wearing a plastic mask with her sequined black Balenciaga gown.

The Skims founder first forayed into mask wearing in September 2021 when she arrived in New York wearing a head-to-toe leather look.

Kardashian has made quite the show of being shocked and appalled at Balenciaga’s foray into pedophilic near-pornography, but it is hard to take her quite seriously given her own bondage-adjacent modeling and use of her own daughter to promote similar themes for the fashion brand. 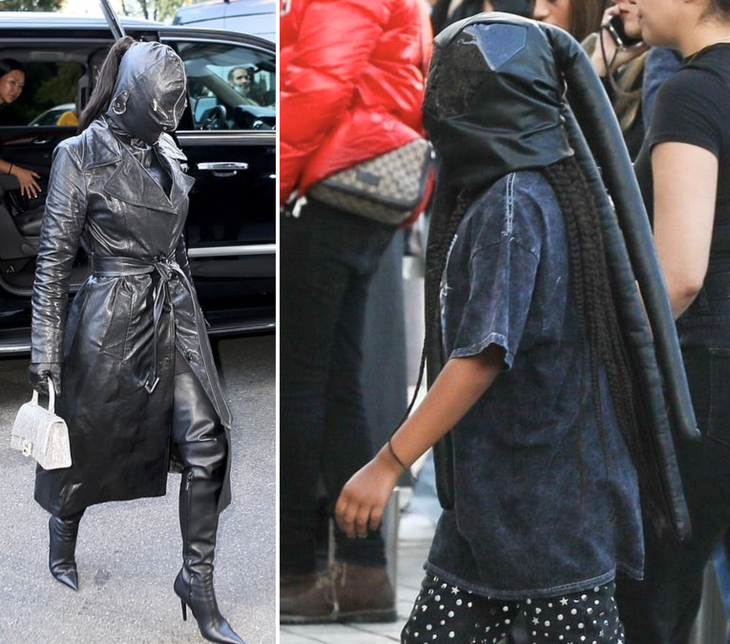 Dressing up a 9 year-old in a bondage mask is very on-brand for Balenciaga, and I wish I could say that I am shocked that Kanye (Ye) West and Kim Kardashian being tied up in this mess is shocking. But unfortunately, as members of the current Elite™ (Ye just got kicked out of that crowd) they fit right in.

It looks like the fashion media is going to try to bail Balenciaga out of this mess, because this is how the industry and the Elite™ roll. But when your top management team is into satanism, cannibalism, the torture of children, and other weird stuff it is hard to credibly assert that the photoshoots that got them in trouble were accidents or somebody else’s fault. But they have to try, because a ton of money is at stake, and the reputations of some very important people.

I am going to write a VIP post on the pedophilia that keeps popping up among our elite class. As reluctant as I am to give any credence to a conspiracy theory that involves a pizza parlor, there clearly is something to the allegation that our Elite is filled with pedophiles. There are just too many examples to ignore.

And there is the obvious fact that the Jeffrey Epstein client list is still hidden.

Expect a full blown distraction campaign surrounding this current scandal. We have already seen the beginnings of the whitewashing in that New York Times story. With the amount of money involved and the high profile names associated with this disgusting mess the press will go into overdrive to protect the perpetrators.

Unfortunately they will likely succeed. Do we have rights any more?

Are House Republicans serious about a 30% national sales tax?