Regular readers know I’ve written several times about the original Star Wars movies and the awful disappointments known as the prequels and the sequels. But like every kid who grew up in the late 70s/early 80s I was also a huge fan of Raiders of the Lost Ark. In fact, I have a pretty clear memory of reading an announcement that the movie was coming in a little column in Starlog magazine sometime in 1980. The fact that Steven Spielberg and George Lucas were teaming up on the film raised my expectations as high as they could go.

And somehow the movie still exceeded them. Raiders is #66 on the AFI’s 100 greatest movies (10th Anniversary) list so it’s obviously not just my opinion that it’s a masterpiece of an adventure film. But time passes and sequels happen.

I didn’t love Temple of Doom when it came out. Something about the tone just felt off. It was alternatively too silly (short round) and too dark (people being lowered into lava and having their beating hearts pulled from their bodies). In retrospect I like it a little better than I did at the time but it’s still not on the level of Raiders.

The Last Crusade was considered a return to form by many. Some love Sean Connery and even consider this their favorite of the three. I didn’t have as many complaints. Some of the action scenes (the tank, the final challenges) were nearly at the level of the first film.

And then nearly 20 years later we got Kingdom of the Crystal Skull and the world was introduced to the phrase “nuking the fridge” which was really just an updated version of “jumping the shark.” I think I’ve seen this twice and really I can’t remember a bit of it after the fridge nuking. In theory I sort of liked the idea of making it about aliens. After all Spielberg is the guy who gave us ET and Close Encounters so it made a certain sense.

Despite being entirely forgettable and not very good, Crystal Skull made a lot of money (almost $800 million worldwide) which meant another sequel was possible if it could be made before Harrison Ford was too old. And that brings us to Indiana Jones 5 which, as of today, we know is titled “Indiana Jones and the Dial of Destiny.”

Um, sorry, the what of what now? What the hell is a dial of destiny? It’s not clear:

Indy’s latest outing is set in the 1960s during the Space Race between the U.S. and Soviet Russia. Unlike previous films, George Lucas did not write the story for “Indiana Jones 5” and Steven Spielberg is not the director. Instead, both of those roles will be filled by James Mangold, who is known for his films like “Logan,” “Ford vs. Ferrari,” “3:10 to Yuma” and more. Spielberg is still attached as an executive producer, and Lucas, the original creator of the film franchise, is credited with some involvement in the writer’s room.

So, I’m not one of those people who enjoys slagging things for fun so take what follows as the wary hesitation of someone who would really love for this to be great.

Right off the bat we get this shot below. It’s part of a chase scene and I can’t tell if the cars are real or fake and Indiana Jones looks like he’s flying from one to the other without any real weight and the truck that almost hits him definitely feels like CGI.

I get that Harrison Ford is 80 and can’t really do these stunts anymore but this is the franchise that gave us the truck chase, one of the greatest actions sequences ever filmed. I’m not getting that from this clip. I’m getting more of a Transformers vibe. After that the look of it improves, partly I think because they are showing us disjointed shots. I know it’s only a teaser trailer but I have zero idea what’s going on here. Indy seems to be at least two different distinct ages in this trailer. Later, we even get a few more shots from the same chase that look better: 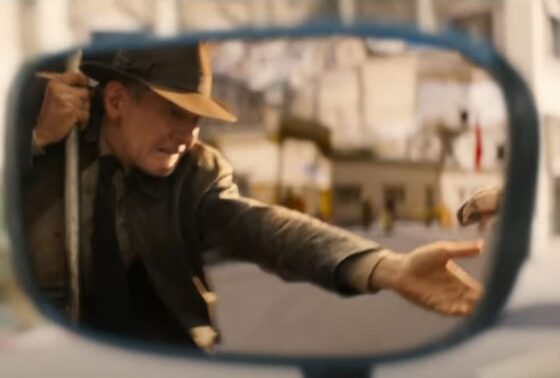 Then at the end there’s a callback to that famous improvised moment in Raiders when Indy shoots the swordsman rather than fighting him with his whip. Only this time Indy uses the whip and everyone else pulls out a gun. It’s nostalgic but is it good or is it just pointing back to something that was good?

Maybe I’m just a bit burned after all of those terrible Star Wars sequels. The Last Jedi really was the end of my ability to hope for much out of these old properties I loved as a kid. Or maybe it’s just harder to suspend disbelief when Indy is 80 because, really, it doesn’t make much sense.

I still love Raiders and always will but what are the odds they can bring it to that level one more time? Maybe that’s just too much to hope for but I’d really love to be wrong.