The sudden, unexpected death of the executive producer for ABC’s “This Week with George Stephanopoulos” at age 37 over the weekend has some sounding the alarm about the dangers of COVID vaccines, even though it has not been determined if a shot played a role.

Dax Tejera “died suddenly” Friday, ABC’s Rachel Scott reported on the air Saturday. The cause of death was reportedly a “heart attack.”

.@RachelvScott reports on the sudden passing of Dax Tejera, the Executive Producer of @ABCThisWeek. In a memo to employees, @ABC President Kim Godwin said that Dax’s passion and love for the show shined every Sunday morning. pic.twitter.com/Cl7P5EJ1O5

Kim Godwin, president of ABC, issued a memo to employees to announce his death saying, “Dax’s energy, passion and love for that show shined every Sunday morning.”

TRENDING: The simplicity of keeping the Sabbath, Part 2

“This Week” co-anchor Jonathan Karl noted Tejara “adored his family and he loved his work. His passing has left us shocked and hurt.”

This latest case of young person who died suddenly is once again raising awareness of the possible part a COVID vaccine may have played in Tejara’s death.

Breanna Morello, a journalist who quit as news producer at Fox over its own COVID-vaccine mandate, tweeted: Disney (which owns ABC News) forced all of its employees, including remote, to get vaccinated. Never forget what these people did to us. NEVER FORGET.

Disney (which owns ABC News) forced all of its employees, including remote, to get vaccinated.

Never forget what these people did to us.

Are the national media covering up the rash of sudden deaths possibly caused by COVID shots?

Dana Parish, the bestselling author of “Chronic: The Hidden Cause of the Autoimmune Pandemic and How to Get Healthy Again,” tweeted: “A media blackout on a HUGE story; the tragic rise in sudden deaths of young, healthy people.”

A media blackout on a HUGE story; the tragic rise in sudden deaths of young, healthy people.

Husband, dad of 2 little ones died suddenly of a heart attack last night.

“Incredible the number of young people who are having sudden death. Something is very wrong. May his soul rest in peace.”

Absolutely tragic, Dax Tejera, Excecutive producer of ABC News, died of a heart attack at age 37. Incredible the number of young people who are having sudden death. Something is very wrong. May his soul rest in peace. pic.twitter.com/y6Z0zjSnud

While it’s unclear if Tejera did receive a COVID vaccine or booster, “ABC implemented a vaccine mandate in the summer of 2021,” according to the Hollywood Reporter.

Tejera actually tweeted out a promotion for his show about the COVID-vaccine development in November 2020, writing: “With optimism growing about a COVID vaccine deploying by mid-December, @GStephanopoulos goes one-on-one with Dr. Moncef Slaoui, the chief science adviser for the Trump administration’s vaccine program, Operation Warp Speed.”

The Hollywood Reporter said in June that two crew members of ABC’s “General Hospital,” James and Timothy Wahl, sued ABC “after getting fired for refusing the COVID-19 vaccination in a lawsuit that portrays efforts to curb the spread of the virus as ‘unprecedented restrictions on liberty.'”

“These actions were unlawful. ABC does not have the authority to force a medical treatment on its employees against their will,” read the complaint filed in Los Angeles Superior Court.

“Even if it did, it must offer religious exemptions to anybody who requests one. It cannot discriminate among religions and cannot second-guess the sincerity of one’s religious beliefs without an objective basis for doing so. It did not have one here. ABC’s actions constitute religious discrimination and violate Plaintiffs’ rights under state law.”

Earlier this month, as WND reported, a 25-year-old former college football player died after suffering a heart attack while jogging. 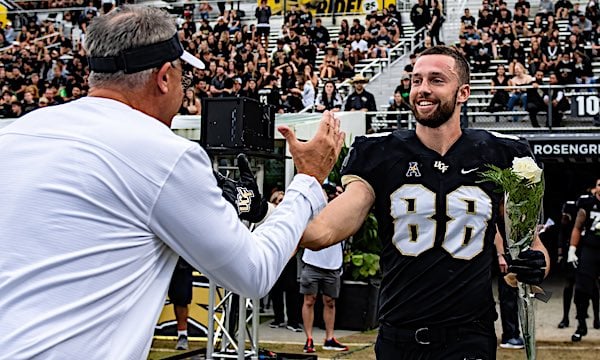 Is the news we hear every day actually broadcasting messages from God? The answer is an absolute yes! Find out how!

The BBC reported Tuesday a coroner in England concluded a 27-year-old man “died of a blood clot to the brain, caused as a direct result of his body’s reaction to the AstraZeneca Covid-19 vaccination.”

In a recent study in Germany of autopsies of 35 people who died within 20 days of COVID-19 vaccine injection, a total of 25, or 71%, had a final diagnoses consistent with a vaccine injury.

McCullough, in a recent video interview with WND, pointed out that in the past, long before the COVID vaccines, athletes who died sudden typically were diagnosed with hypertrophic cardiomyopathy, an abnormal thickening of the heart, or premature heart blockage. Now, athletes are thoroughly screened to rule out those conditions.

Top baby names in America 50 years ago: See if yours made the list

These universities have all banned TikTok from school-owned devices