(Photo by Braňo on Unsplash)

For many years, one of the world’s top scientists, synthetic organic chemist James Tour, has led a team developing next-generation technology to target and kill cancer cells with virtually no side effects.

Tour, a professor of chemistry at Rice University in Houston, is using nanomachines – the marvelous “motorized” organic molecules created in a lab that won three chemists a Nobel Prize in 2016 – to target cancerous cells. After affixing themselves to the diseased cell, Tour’s novel nanomachines – equipped with a rotor and a stator – are activated by ultraviolet light to drill through the cell membranes at a speed of up to 3 million times per second. The cancer cells then can be killed either by injecting chemical agents to destroy them, or by repeatedly piercing the cell to blast open tumorous membranes until the cell dies by necrosis.

The use of that technology to treat cancer and other diseases is closer to reality now, with the launch of an Israeli company called Nanorobotics.

Therapies, though perhaps six years from the market, are now in the pre-clinical trial stage for treatment of glioblastoma, non-muscle invasive bladder cancer, and squamous and basal cell carcinoma.

WND spoke with the company’s chief technology officer, Shlomo Nedvetzki, at the annual COSM conference in Bellevue, Washington, hosted by the Discovery Institute.

Born in Israel, Nedvetzki is the son of immigrants from Eastern Europe. He has a Ph.D. in immunology from Hebrew University Medical School and a post-doctoral degree from Imperial College London.

Nanorobotics is one of 16 companies, 15 of which are in Israel, spawned from Tour’s research. But Nanorobotics is the only one based on Tour’s nanomachine technology.

What is it about Israel, WND asked in the video interview (embedded below), that so many of the companies are based there?

Is an end to cancer near?

“Well, I think Israel is the holy land,” he replied, smiling. “It’s a holy, special place, and I think that’s why Professor Tour is very connected to Israel.”

See a depiction of nanomachines drilling into cell membranes: 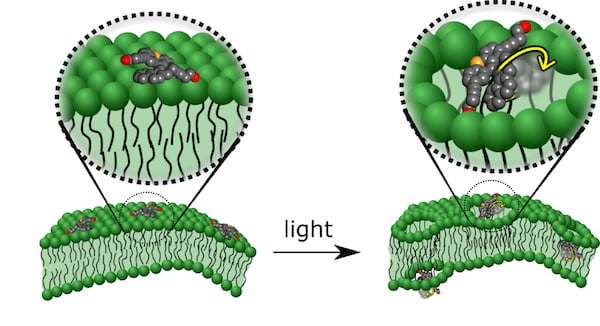 When three pioneers in the development of nanomachines were awarded the Nobel Prize in 2016, Tour was quoted in a New York Times story saying the Nobel would help convince people that nanomachines are not science fiction.

“No one is making money on these right now, but it will come,” he said in October 2016. “These men have established and built up the field in a remarkable way.”

Tour predicted the first profitable use might be machines that open up cell membranes in the body to deliver drugs.

“It’s really going to be quite extraordinary,” he said.

See a Voice of America segment on nanomachines and cancer treatment:

In a presentation at the 2021 COSM, Tour explained that his nanodrills also can be programmed to target “super bacteria” that have become resistant to drugs. The machines can drill holes through the cell walls and cytoplasmic membranes of bacteria, either killing the cells or weakening them to enable antibiotics to work.

Tour, describing himself as a “Jewish kid” who grew up in New York City, tells how he came to believe that Jesus is the Messiah in the video below, which is part of a series called “One for Israel”:

Do Republicans prefer Trump or DeSantis in 2024? New poll has answer