“A fool and his money are soon parted.”
— Thomas Tusser

Every email is more histrionic than the last coming from some funnel called PAC to the Future. Nancy Pelosi’s (pan)handlers lean heavily on underlines, bolding, and various font colors to really drive home the urgent need for cash.

I have no idea how I ended up on her list, as I’ve never voted once in my life, and certainly not for a Democrat. When I was 23, way back in 2010, I interned briefly with the Lowndes County Democratic Party in Valdosta, Ga., as part of my internship requirement for the ultimately worthless liberal arts degree for which I’m still indebted, so maybe that’s it. If so, Nancy’s handlers are really digging deep for cash.

Speaking of cash, don’t this woman and her corrupt husband have enough money? The ice cream freezer alone in her mansion costs $24,000. Maybe she could pawn that first before turning to online solicitation.

Plus, she’s retiring. Maybe this is her last chance to scam for money using her public office so she’s going out with a bang. Perhaps it’s not really about the money, but some kind of thrill, like a gambling addict. Hysterical cash-grabbing sort of seems like a fetish. 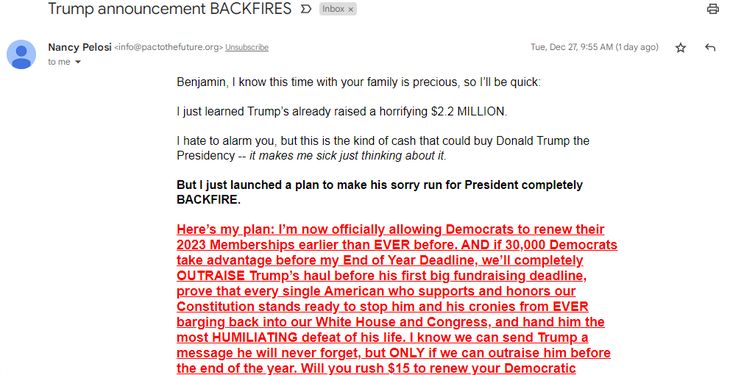 The sad thing is that Pelosi’s handlers are going to dupe a lot of people into opening their wallets by terrifying them with the Trump boogeyman — the best thing that ever happened to the modern Democratic Party. Of course, most of her marks will be upper-crust Martha’s Vineyard/Hamptons dwellers, but some percentage will actually be honest, hardworking dupes who genuinely can’t afford to part with their meager incomes.

Street beggars are infinitely nobler than Nancy Pelosi because a.) they actually need the money and b.) most are willing to admit, when pressed, that they just want to buy a nice 40 oz. from the gas station and none of this is really about whatever cover story they invented for their cardboard sign.

Nancy would never admit her true motives for her digital panhandling because she has no shame — her number one asset that catapulted her to the top of the D.C. Swamp. (Number two is unchecked ambition and greed.)

As Harry Truman once observed back when there were still some politicians who didn’t lie, “Show me a [wo]man that gets rich by being a politician, and I’ll show you a crook.” Katie Hobbs Is Sworn in as Ariz. Governor Amidst Election Challenges and Scandals