Being all uber-woke you can be has just about brought the Army to its knees. In this day and age, they’ve fallen so far down the rabbit hole anymore that they can’t get anyone who’s their normal target recruit to sign up to save their lives. Or anyone else’s, for that matter. Their recruiting numbers are dismal.

…The service fell 15,000 recruits short of its fiscal 2022 goal and it cut its goal for total number of soldiers in fiscal year 2023 by an additional 15,000, suggesting that it sees a longer-term problem.

Only 23% of young Americans meet the fitness, health and other standards required to join the military, according to Army statistics, and less than 10% are interested in joining.

WHY aren’t they interested in joining? I’ll give you one clue.

All this morale-destroying socialist BS produced – like the massive admin bloat on college campuses – the accompanying rise in employment opportunities not for warfighters, but for Experts™ and Diversity Police™.

…The Biden administration’s politicization of the armed forces has contributed to this disturbing collapse in morale.

Soon after Joe Biden became president, the Pentagon ordered an unprecedented military-wide “stand down” of service members to root out right wing domestic extremists, wasting 5.8 million man hours. The Pentagon then hired Diversity, Equity, and Inclusion Officers at salaries as high as $200,000. For the past two years, the Department of Defense rigidly enforced vaccine requirements, cutting off tens of thousands of service members from benefits, even when many have legitimate objections and are young, healthy adults.

…In recent years, the academies have also taught radical doctrines like Critical Race Theory under the label of “diversity and inclusion.” The Air Force Academy established a special “Diversity and Inclusion reading room” that it described as a “safe space” for America’s young warriors. It also created an organization of hand-picked cadets – identified by a purple braid on their dress uniform—to spread these controversial ideals in the ranks. At West Point, cadets can now minor in “Diversity and Inclusion Studies” alongside cadets studying serious subjects like Grand Strategy, Aeronautical Engineering, and Nuclear Science.

Not to mention the resentment it engenders spending the scarce resources available on the wrong things.

Tell me again how we spend too much on our military. https://t.co/HEm7OK6NtQ

The primary difference being, as every veteran knows, that on a college campus or at a job, when you tell the hired DEI Nazi they are free to blow their suggestions how you should frame your language out a selected orifice, the absolute worst that happens is unemployment or disenrollment.

It’s very different in the military – they own you, once you freely raise that right hand. The same negative response to the new regime Biden and the wokester brass are cementing in place can be – literally – a life-destroying experience, especially if you have that craven, vindictive brand of SNCO or senior officer who loves his next rank and the desk he’s in right now more than anything else in the world. They will put your infidel butt out on the street in a flame of glory purely as a box ticky for their career. You will be left to gather the smoking ruins of a discharge rating that can deep-six your job chances and impact the rest of your life.

No, the military is nothing comparable to being a Von’s check-out bagger or the postman. Your average civilian has no concept of the possible lifetime consequences of actions they are free to take at any given time and then go about their day.

It is yet another hard-to-grasp but completely valid reason, as I wrote back in October, that vets are steering their own kids away from service. So few people have the courage to have anyone’s back but their own.

So, here we are. The Army has already lowered physical standards to dang near allowing Dale the Whale and friends in, as long as they’re vaguely ambulatory. Basic Combat Training (or boot camp) has been modified to be less physically challenging (if the bulk of your recruits are overweight coming in, you can’t start off where you used to), and I’ll let this screencap speak for itself.

…“Commonly referred to as the shark attack, this non-documented period of instruction was developed during our draft Army years,” Command Sgt. Maj. Robert Fortenberry, the CSM of the Infantry School at Fort Benning, Georgia, said in a video presentation at the recent 2020 Maneuver Warfighter Conference.

“Drill sergeants were charged with the [evaluating] trainees’ ability to handle stress, singling out the perceived undesirables by enveloping them in a manner that emulated a shark attack,” he continued. “This activity, however, does not instill the spirit of the infantry; it betrays the innate trust between teammates and, worse, betrays the crucial bond of trust with our leaders.”

No more yelling, see? Not quite as emotionally challenging, either. Can’t upset anyone. They might want to leave.

Where will they pull other recruits from, if they’ve already plumbed these depths? With pickins’ getting truly slim, I guess the “behavioral challenges” category was the next logical step.

…Under the new rules, a potential recruit who has completed high school or college or successfully held a job without counseling or medication for three years for ADHD would be able to enlist. That symptom-free period “is reassuring that they would make it through their initial entry training and hopefully have a successful military career,” said Army Lt. Col. Kim Helgemoe, a member of Pentagon’s Accession Policy, an office that sets medical admissions standards across the force.

A potential recruit who has in the past been treated for depression or other mental-health ailments, or has taken any medication for such conditions, can join the military only with a waiver. Those waivers can be difficult to obtain as they factor in the recruit’s health, the potential job and the requirements of the service. A recruit also may not be taking medication upon entering basic training, according to military guidelines.

In the interest of fairness, I really don’t see how they could exclude someone with a history like this from joining now after they’ve allowed the transgender experiment to explode. In 2017 I wrote a post supporting Trump’s ban against allowing transitioning/transitioned transgenders in the military.

One of the sadly ironic additions was a tweet from Lady Gaga. I’m sure she wrote it earnestly to embarrass Trump for his transphobic actions, but she inadvertently made his point beautifully. 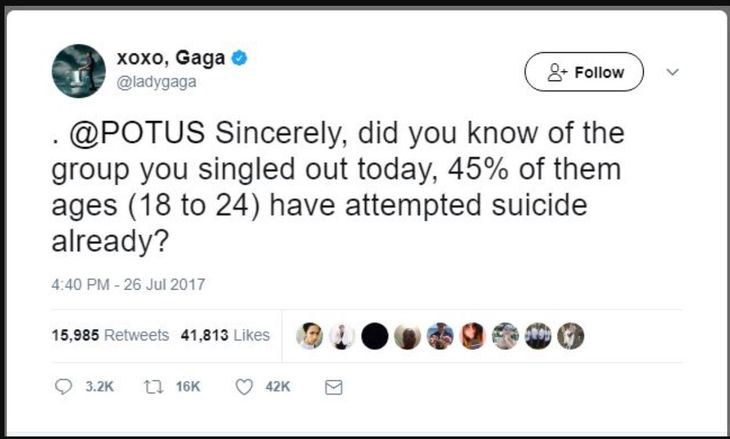 PERFECT! SIGN THEM UP and for God’s sake – make SURE THEY EACH GET A GUN!!!

I’m assuming she got her numbers from the 2015 Transgender Survey.

…The 2015 U.S. Transgender Survey (USTS), which is the largest survey of transgender people in the U.S. to date, found that 81.7 percent of respondents reported ever seriously thinking about suicide in their lifetimes, while 48.3 percent had done so in the past year. In regard to suicide attempts, 40.4 percent reported attempting suicide at some point in their lifetimes, and 7.3 percent reported attempting suicide in the past year.

The trans community as a whole has quantifiable issues and yet they are now embraced by this military – woe unto the peasant who does not. So recruiting those who have had “behavioral, mental health and developmental” issues but demonstrated an ability to handle life without chemical intervention (or legal issues) for whatever number of years probably sounds like a go to the Army. What do they have left to them? Now, I’m not sure how it will sound to a bunkmate or the fellow in the bunker next to one when the Shiite hits the fan. There are myriad intangible stressors that working in a civilian job without your Ritalin/drug of choice might not prepare you for.

…The Pentagon said it plans to assess the effectiveness of its new program in six months’ time so that it has a year of data to study. In addition to department-wide policies, each service sets its own specific standards.

“We want to be cautious,” Army Secretary Christine Wormuth said about how the service admits those with mental-health challenges. “I think we have to constantly be refreshing our approach and looking at conditions in this society.”

Is the Department of Defense health care system prepared to handle an influx of people who find out after a year they can’t hack it? Right now is pretty quiet with no Afghanistan or Iraq deployments anymore, but Korea in winter and backwoods, Third World postings have broken seemly sane people, too. I ask for safety’s sake – for everyone – and because their issues become the taxpayer’s issues taking care of them once they get through boot camp.

There’s so much to think about, as there was with the transgenders, and the Woke DoD types went ahead anyway.

The Navy’s in a tough spot as well. You can be as old as the hills, not quite the sharpest tack, and still hit the 7 Seas.

It’s not a job – it’s an adventure and free medical for your aging bones.

…With stakes this high, recruiting standards should be high as well. They are vital both to the nation’s defense and the recruit’s survival.

That’s why the Navy’s announcement that it is lowering minimum scores on the Armed Forces Qualification Test and lifting its recruiting age limit from 35 year old to 41 is worrisome. If not accompanied by additional safeguards, these changes signal bad faith toward the nation and the recruit.

It’s no secret why the Navy is lowering standards: its recruitment program is in heavy seas. The service failed to meet its 2020 recruiting goals. As a result, it has fewer people in training to serve in the fleet — and that fleet has a key role to play if the U.S. is stay ahead of the fast-rising China threat.

The manpower shortages are already affecting the folks in uniform – they have to pick up the extra loads. When you’re talking accelerated deployments or sea slots, that takes a toll really fast. Things will start breaking and crashing, and I don’t mean only airplanes, boats, or amphibs.

Families start to disintegrate. Then the wheels really come off and where are your precious pronouns then?

I don’t know about any of this or how it shakes out.

But I do know the services are between a self-inflicted rock and a hard place, and too stupidly addicted to Woke dogma to squeeze out of it.

Greg Sargent: The media is killing the Democratic party on immigration