Yesterday there was a story circulating about Rep. Katie Porter allegedly firing a staffer who had given her COVID. It started with this tweet containing screenshots of a conversation between the staffer and Porter.

VIBE CHECK: Rep. Katie Porter fires staffer after both test positive for COVID. Full texts from the Congresswoman firing the staffer via text. Shared with permission from staffer. pic.twitter.com/jbhn2NzrmB 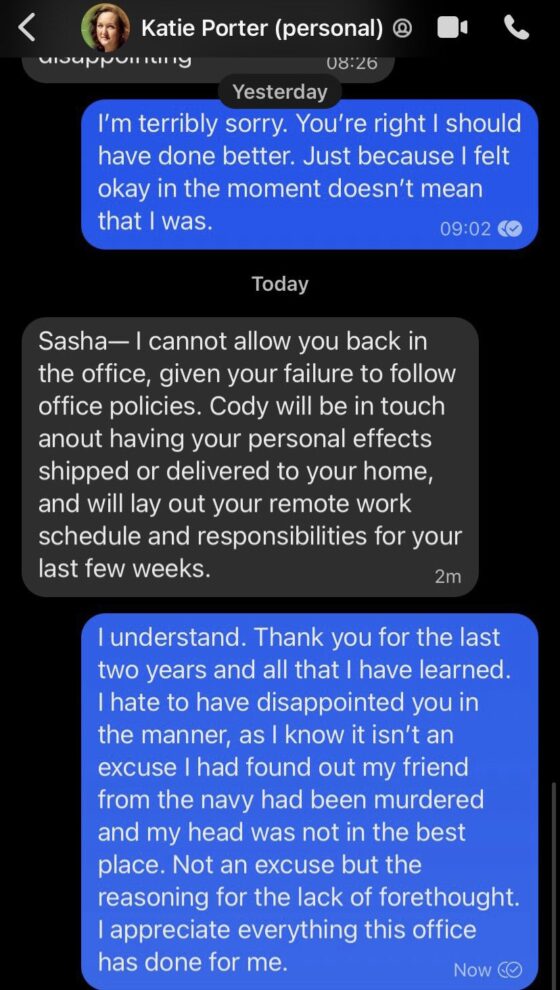 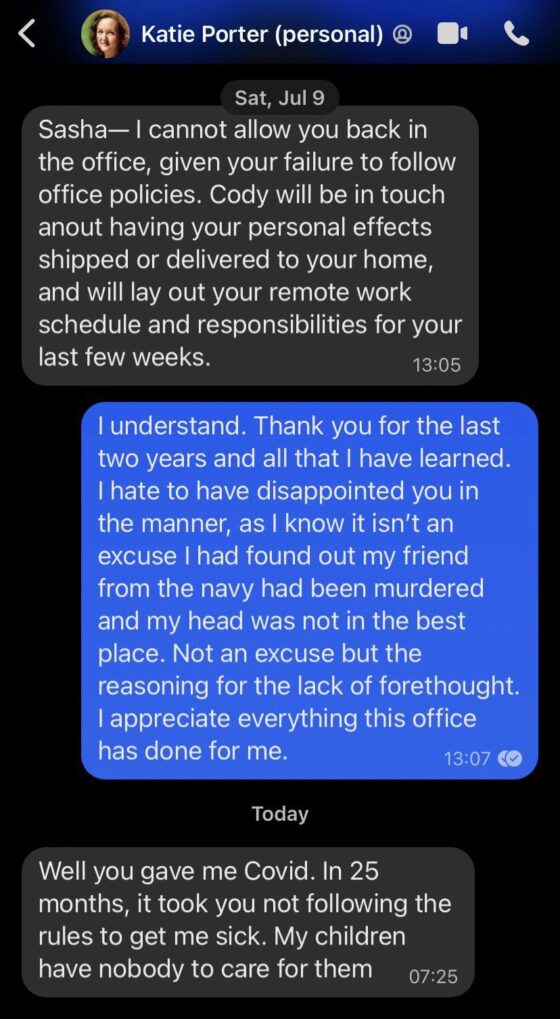 The staffer in this case was a veteran named Sasha Georgiades who had worked for Porter for nearly two years. Her time in the office was scheduled to end in August but effectively ended several weeks early on July 9 because of the COVID issue.

“[Porter] never spoke a word to me after this,” says Goergiades, who now works as a consultant…

“At the time I felt okay, just sore as if had worked out too hard,” she says. “It was hard to differentiate until the next morning and as soon as I felt sick I took a test, told the district director I had it, and stayed home.”

Nevertheless, Porter contracted COVID-19 around that same time, and blamed Georgiades. The representative, a single mother, was especially angry about arranging for someone to take care of her children while she was sick, and lamented in the text messages that “my children have nobody to care for them.” (According to Georgiades, Porter’s calendar said she was supposed to be in Washington, D.C., that week, anyway. Her three children live in her California district.)

Porter has pushed back on the claim that Georgiades was fired but in fact she couldn’t have fired Georgiades even if she’d wanted to do so.

“This former employee was not fired. She was a fellow in our office, and weeks before she breached COVID protocol in July, we had already mutually agreed on an end date in August 2022,” a Porter spokesperson wrote…

Georgiades told Fox News Digital on Thursday she “was not fired because [Porter] couldn’t” fire her.

“I was a wounded warrior fellow so the program would have to have had fire [me],” Georgiades said. “Essentially I was demoted to remote and banned from the office.”

More to the point, Georgiades argued that poor treatment of staffers in Porter’s office wasn’t exactly a new experience.

“She has made multiple staffers cry and people are generally so anxious to even staff her because if ANYTHING goes wrong she flips out on whatever staffer is present,” Georgiades said. “She just talks to staffers however she wants.”…

The former Porter staffer said the congresswoman’s office will “overburden the staffer with work so it either comes to a point that they can’t juggle it all or they are fired for not keeping up” and noted this “happened shortly after I got there with another staffer.”

“He was so upset and hurt,” Georgiades said, adding the staffer was a staff assistant in the office — the entry-level paid role for congressional offices.

The account that first tweeted about the situation has followed up with some messages from other Porter staffers. It sounds like another case of a progressive boss who is a terror to work for.

Here’s the full message. “This is just the tip of the iceberg in how abhorrently and abusively she treats staff,” the former staffer writes. He/she adds, “she’s prone to fits of rage, regularly disparages anyone who even slightly disagrees with her or displeases her, and is incredibly arrogant, mean spirited and petty.”

Here’s that second comment in full: “Unable to cope with basic demands of being a member so she takes it out on staff.” 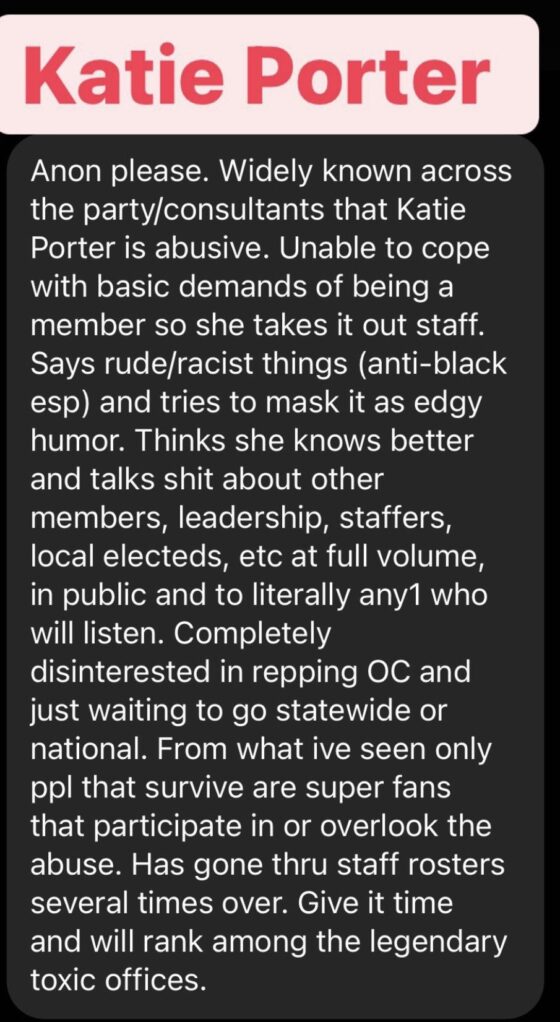 Does everyone sense a pattern here? This is unacceptable on all levels. 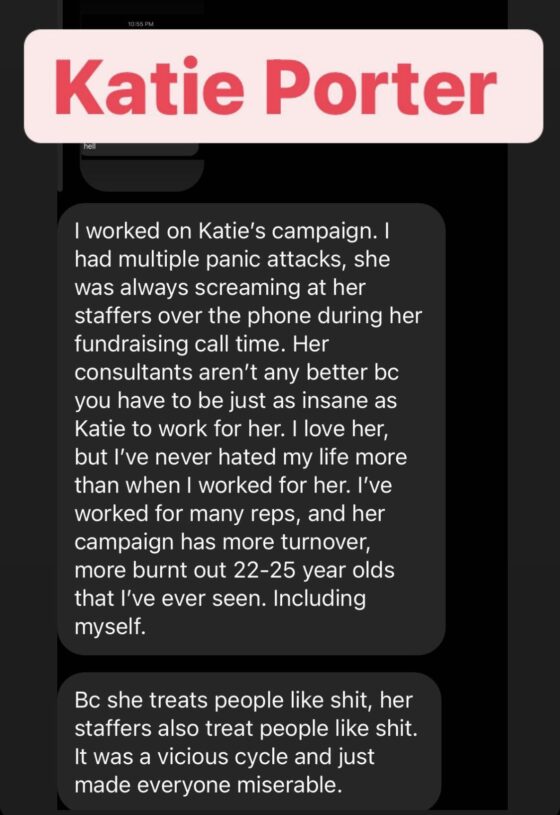 I’m definitely sensing a pattern. It’s a shame that no major media outlet broke this story. Hopefully someone will follow up on it now. Whatever happens next, her progressive fans on MSNBC will probably be happy to overlook it.

“We are professionals” is usually BS Blake Masters is bringing the fire!