Insanity Wrap: Brazil Is Trump’s Fault and So Is Literally Everything Else

You know what’s Trump’s fault? The violent protests in Brazil, where they do political violence with the same enthusiasm and frequency as they play soccer. That’s the big crazy on today’s Insanity Wrap — an entire week’s worth of lefty nuttiness wrapped up in one easy-to-swallow medicated news capsule.

Only women have uteruses and can menstruate. pic.twitter.com/gUFRTLnTea

I made it 18 seconds in, just to see where he was going with this.

Then he went exactly where I expected him to go and had to turn it off with extreme prejudice.

Remember the Journolist™, that secret listserv where lefty journalists would hammer out the “proper” take for big stories? When they got caught — basically conspiring to rig what people could know — they pinky swore never to do it again. Except nothing changed.

These days, they probably have a Slack channel, or maybe just rely on state-sanctioned social media to get the same narrative-setting job done.

Robert Heinlein, visiting the Soviet Union decades ago, coined the phrase “today’s pravda” for Moscow’s ever-shifting narratives. Pravda means “truth” in Russian, but what’s true can change daily, depending on the needs of the Party. The important thing is that all the news outlets repeat the same pravda at the same time.

Today’s pravda in the American press: Everything is Trump’s fault, especially the ongoing political violence in Brazil.

Here’s NPR’s Bill Chappell and Shannon Bond, arguing that “the attack on Brazil’s Congress was stoked by social media — and by Trump allies.”

Here’s the thing: America’s leading intellectual export may also be its most combustible, if not dangerous. After all, there is no quality control for an idea, and once it crosses U.S. borders, Americans ostensibly cede any fail-safe controls for ideas. Democracy can carry great risk if it is sparked in a place with insufficient ventilation.

That prose is so stiff that it makes you wonder if English is Elliott’s first language.

And you can watch MSNBC’s Nicole Wallace here saying, “We now have copycat crimes against democracy breaking out all across the world. Clearly, not enough has been done…to dissuade people from trying to attack democracy…Our Department of Justice has done nothing in the category of accountability for Donald Trump.”

Then there’s Barack Obama, playing his usual game of pretending to be above the fray by saying what everyone else is saying, but without naming names. He tweeted on Monday:

The entire world has a stake in the success of Brazil’s democracy. Together, we must reject any effort to overturn or disrupt the will of the Brazilian people and affirm the peaceful transfer of power as a cornerstone of democracy.

It’s enough to make you wonder if Obama would be so concerned if these were lefty riots if Jair Bolsonaro had won reelection.

Just kidding! Barack would have kept himself busy counting his Netflix money.

Bill Clinton took the same tack, conveniently forgetting his loser wife’s role of using the FBI and the media to sabotage the presidency of the man she lost to.

That “blueprint” report in Time is the real tell, however. The next time any political violence* occurs anywhere, it will be Trump’s fault, Trump’s blueprint.

*Unless it’s lefty violence, of course, because that’s just The People™ expressing themselves.

Dog having fun in the snow..🐶 🛷🌨️😅 pic.twitter.com/AnNV8uLTPv

You could watch this one on a loop all day.

He Saluted a Good Humor Man, an Usher, and a Nun

As the president walked in at the migrants center, a woman said, “And here we have the folks from the Salvation Army.

Biden then walked up to one of the uniformed men standing there and shook his hand.

“I spent some time with the Secret Service in Poland and Ukraine,” the president said.

It might be even worse than the headline indicates.

Biden sees the Secret Service every day, every hour, no matter where he is — he doesn’t have to go to Poland or Ukraine.

So what we have here is a case of double mistaken identity.

Biden met a Salvation Army “soldier,” and mistook him for a Special Forces soldier like he might have met in Poland or Ukraine. But then he said “Secret Service” instead of “Special Forces.”

Because his brain is totally fine.

Climate Change, Is There Anything It Can’t Do?

For women and girls around the world a changing climate means increased threats of gender-based violence.

A study in Kenya showed that domestic violence rose by 60% in areas that experienced extreme weather.https://t.co/bFFM0jnFQ3 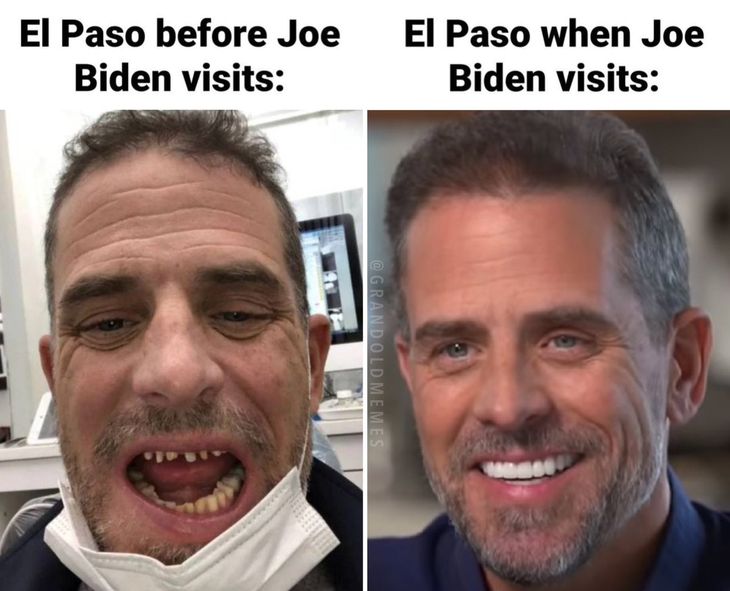 You should have seen the ones I decided not to go with.

Will Smith Grovels Over Oscars Assault While Promoting New Film