Ronna Romney McDaniel, the chairwoman of the Republican National Committee, is being urged to resign by some conservatives for allegedly being a “fraud” after her staged photo op this week at the U.S. southern border.

Romney appeared with a six other Americans Sunday at the border in Hidalgo, Texas, posting photos and a video of her visit on Twitter.

We are at the border today to call out Joe Biden.

Because of him, this is the worst border crisis in history! pic.twitter.com/UimQ9dmIDZ

In her video, the Republican Party chair slammed President Joe Biden, saying: “He’s putting forward a fake plan that’s not gonna solve any of the problems that these folks deal with every day. We need more Border Patrol. We need more support for our Border Patrol.

“What’s happening across this border is not humanitarian for anybody who’s coming here. The cartels are making $13 billion a year. We have a drug crisis that’s inundating these communities.

“This is a shame what the Biden administration is doing. We need to call them out every single day. This is not a two-hour photo op. This is an everyday problem that Democrats are refusing to fix. And we’re here today to say, ‘President Biden, do better,'” she concluded.

Should Ronna Romney McDaniel be ousted as RNC chair?

Wednesday morning, McDaniel wrote a commentary at the Daily Caller News Foundation, in which she added: “Everything you’ve read about the border is true: it’s unguarded and chaotic. Thousands of illegal immigrants and millions of deadly fentanyl doses make it across on a weekly basis.

“It is shameful and dishonest for Biden and his administration to pretend that this isn’t a raging crisis. I doubt that parents who have lost children to this out-of-control wave of drugs are comforted by Biden saying there are ‘more important things’ than the deadly situation at the border.”

But online responses to her message have been anything but positive.

One user, Glen S., a Navy veteran and independent conservative, brought to mind a recent report that exposed millions of dollars in donations intended to help the RNC but were instead financed luxury services for McDaniel and her cohorts.

“You are not for anyone but yourself. Apples don’t fall far from the tree,” he wrote.

You are not for anyone but yourself. Apples don’t fall far from the tree. pic.twitter.com/JktVzj6W8O

Others had similar sentiments:

McDaniel’s time as head the Republican Party is in real jeopardy, as she’s facing a serious challenge from attorney Harmeet Dhillon and MyPillow founder Mike Lindell to replace her.

Is the news we hear every day actually broadcasting messages from God? The answer is an absolute yes! Find out how!

Lindell believes he has secured enough support to derail McDaniel at the RNC’s winter meeting this month, telling Business Insider he’s “locked in” the commitments he needs to make sure McDaniel will not have an outright win.

“It’ll be like, what you’ve just seen happening in our Congress here, you know. There’s gonna be multiple votes, and there’s a three-way race, and we all stay in until somebody gets to 85,” Lindell told Insider, alluding to the majority votes needed from 168 voting members of the RNC. 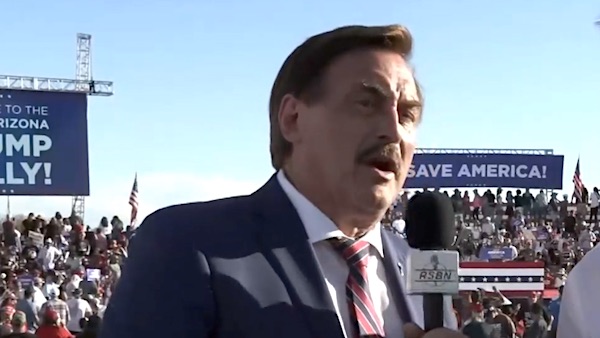 “We believe that RNC leadership needs a new vision for future elections,” said the party’s steering committee, as it declared its “vote of no-confidence in her leadership.”

“We encourage all RNC members across the country to support new leadership at the RNC Winter Meeting,” the committee wrote.

WATCH: ‘I’m going to do it out loud’: ESPN analyst prays for fallen player on live TV