What on Earth is wrong with you Boston?!

Do artists hate Martin Luther King? Do the people of Boston?

I absolutely hate hate HATE the Martin Luther King monument in Washington D.C. Created in the Soviet style of sculpture, it looks exactly like it is: a statue designed by a Chinese Communist who built a monument to Mao Zedong.

But compared to the monument to King just revealed in Boston, the commie statue is a work of perfection worthy of Michelangelo.

It is a monstrosity. Depending upon the angle it looks like a person holding a turd, a male reproductive organ, or engaged in a sexual act that is still illegal in a few states, I think.

Like a movie the critics love and the viewers hate, the sculpture has received the most mixed reviews since She-Hulk. Our cultural elite not only selected this sculpture to despoil the streets of Boston but are trying to convince us that it is a masterwork that evokes emotions of love and humanity.

For most people, it evokes revulsion and derision, mixed with a bit of wonder that actual money was spent to produce and display this.

Please read my other tweets about the sculpture—but here is another angle and the photo of the two “The Embrace” is based on. It’s when MLK Jr. found out he won the Nobel Peace Prize in 1964. pic.twitter.com/Q7Vyk7OPKK

The media–or at the least the woke media, is working hard to convince people that this is a wonderful tribute to King and his legacy. Perhaps in their mind it is, given how they now interpret his words as a version of White Supremacy. The whole “all of us are God’s children” and desegregation talk is passé; we now live in an era where segregationists are back in vogue and celebrated by the Left.

That whole “I have a Dream” speech would get a critic score of 9% on Rotten Tomatoes. 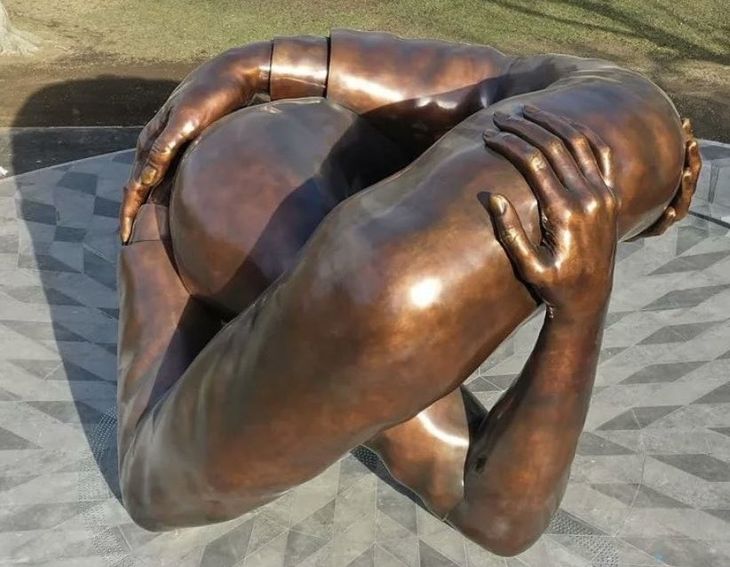 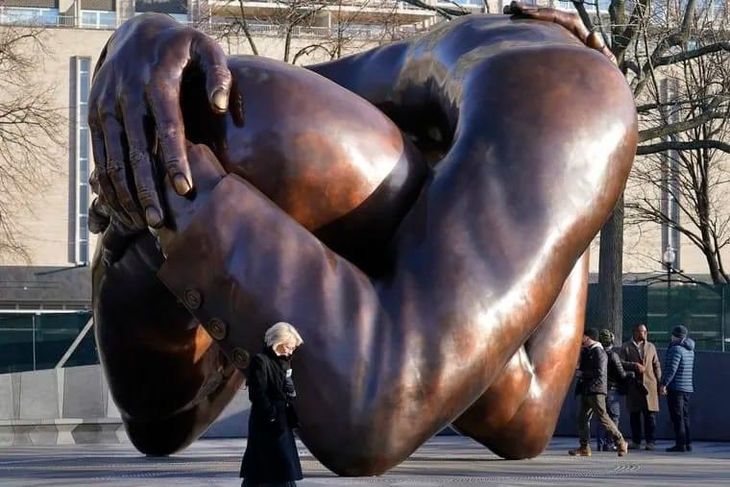 Monuments should invoke respect, not derision. But this is the modern way. Even monuments these days are products of self-absorption, not respect. Without a reference to the artist’s intent and vision, the art itself is meaningless. This piece is about the sculptor, not Martin Luther King. Without him to explain his thinking it is impossible to “get.”

One of the most misguided policies of the past 50 years has been requiring the setting aside of money for every construction project, dedicated to “art.” Well intentioned, I hope, all this has done is create a surfeit of pathetic 3rd rate works scattered around cities like turds. Getting a commission for producing one of these is no doubt lucrative, and I applaud the entrepreneurial skills of those who can scam the public into paying for crap.

I call these pieces “art droppings,” usually as appealing as bird droppings.

The result is usually uglification, not beautification of the public square. Our visual landscape has been systematically destroyed by modernists who are hostile to beauty itself.

Not everything old is superior to everything new. Hardly. But the modern aesthetic is hostile to humanity itself. It is dehumanizing, often ugly, and requires explanation to even understand.

The Singer Building was the tallest building in the world when it was completed in 1908.

Criminally, it was torn down in 1968 and replaced with the modernist eyesore you see today. pic.twitter.com/hLD0ysUdPa

Most people don’t seem to know this, but architecture became highly ideological in the 20th century. The Left took over the profession early in the century, and it shows. Modern art and architecture rarely elevate, almost never tie back to our cultural heritage, and they intentionally make people feel small and helpless.

The result is a modern urban landscape that repels. Ironically, many of the cities most admired by urbanists developed their character long before modern architecture took off. Paris, London, Boston, and San Francisco are distinctive not because of their most modern architecture, but by their oldest which continues to have character.

Most modern buildings don’t, just as most modern art is indistinguishable from the scribblings of children. It’s not that there isn’t anything great being done, but it is swamped by the oversupply of mediocrity. And in many cases, much worse. Pentagon UFO office: Be patient. We’re working on it