That last name is a puzzler, let me tell you. He surely wasn’t invited for his intellectual heft. But he is gullible enough to eat the bugs if someone told him to.

What are they serving at Davos?

Well, bugs have been floated as great for mealtimes at Davos before. Don’t let them tell you they haven’t.

Spokespersons for @wef say “The Great Reset,” eating insects instead of meat, and “You’ll own nothing and be happy” are conspiracy theories, but they’re not. In fact, all of them originated @Davos and from WEF’s own website. But now, WEF is deleting them.https://t.co/wSSU4N24go

So what U.S. political luminaries were on hand for this private lunch with various CEOs from across the globe?

U.S. lawmakers quietly took part in a private ritzy lunch atop the World Economic Forum on Monday featuring dozens of influential business leaders, according to people with direct knowledge of the matter.

Lawmakers in attendance included members of the U.S. congressional delegation taking part in the annual confab for the elite and wealthy in Davos, including Sens. Joe Manchin, D-W.Va., Chris Coons, D-Del., Kyrsten Sinema, I-Ariz. and a few members of the House of Representatives, these people explained. Republican Georgia Gov. Brian Kemp also attended the event, one of the people said.

As it was a “private” luncheon, few details were available about discussion or talks, but some tidbits did dribble out.

…Coons and Manchin each separately addressed the crowd of corporate leaders at the lunch, said an attendee, who declined to be identified speaking about a private gathering.

Coons discussed U.S. aid being given to Ukraine following Russia’s invasion while Manchin, who is the chairman of the Senate Energy and Natural Resources Committee, called for American energy independence, this person noted. Congress passed $40 billion in additional aid for Ukraine last year.

Of course, money and support for Ukraine are a big focus of this year’s gathering, with that country’s president and his wife attending. No surprise there, with dollars in the wind.

Among CEOs attending this year’s conference, their confidence going forward is not as robust as it had been previously. Across the board, many of them are feeling the economic gloom setting in from both the effects of the extended war in Ukraine and inflation throughout every sector.

Confidence among companies in their growth prospects has dropped the most since the 2007-08 global financial crisis due to rising inflation, macroeconomic volatility and geopolitical conflicts, a survey by PricewaterhouseCoopers showed.

With 73% of chief executives around the world expecting global economic growth to decline over the next 12 months, this gloomy view is the most pessimistic CEOs have been since PwC began the survey more than a decade ago, it said on Monday.

The “Big Four” auditor also said that it marked a significant departure from optimistic outlooks in 2021 and 2022.

…”It is both the timeframe and magnitude that is surprising – how do I survive the next two to three years, and make my way through a challenging macroeconomic environment, while transforming my organisation to be fit for growth over the next 10 years,” Moritz said.

…”You’re starting to see some differentiation … in terms of those (firms) that have a debt-driven balance sheet that will struggle while dealing with rising interest rates and inflationary pressures, versus those that have done a good job managing down debt and have the capacity to transform their portfolios,” Moritz said.

I do find it kind of baffling. If this really is a brainstorming session vice just an exercise in vanity, why wouldn’t you invite people who had opinions that would give you a different perspective on what’s possibly coming down the pike? Ostensibly, Sinema, Manchin, et al, are there to be part of panel discussions on where a “reshaped legislative landscape” takes the United States. Well…aren’t they the old part of that picture? Check out the panel discussion topic and guests. 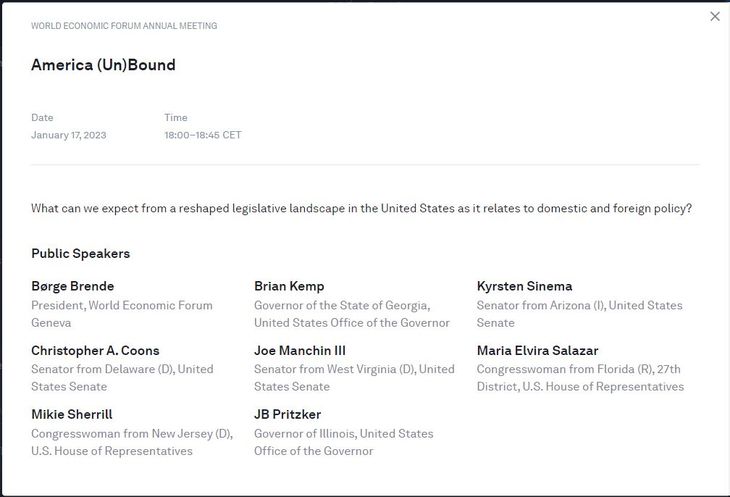 But for Manchin, they’re all uber-liberal Democrats, plus a moderate GOP governor and one rip-roaring RINO congresswoman. What is with that? Are they just there to moan about Jim Jordan, right-wingers, and insurrectionists? Might as well have the harpies from The View on as legislative experts, with Joe ScrewYourBorough as the token Republican. You’re going to get the same result.

I’m figuring it’s just another nice “work” getaway from the office, where you get to talk like-speak with fellow believers in a really chi-chi vacuum, feel important and pretend you do something. SBF: I was “sandbagged” on these bail restrictions

Kamala’s deep thoughts from the Philippines are just so Kamala

Remember that nice British chimpanzee lady? I think she wants us dead