Joe Biden Just Quietly Removed Tax Returns From His Website, and We Have Questions

In the wake of accusations that Joe Biden may have failed to report thousands of dollars in rental income on his taxes, Joe Biden’s campaign has surreptitiously removed some of his tax returns from its website.

As PJ Media previously reported, Hunter Biden claimed on a background check form to have paid his dad $49,910 a month in rent — a suspiciously high figure given the value of the home — while he was living at Joe’s Wilmington, Del., home from March 2017 to February 2018 following his divorce, the same house where Biden stashed classified documents in his garage next to his prized Corvette.

However, according to the Schedule E portion of his 2017 tax forms, Joe Biden reported $19,800 in “rents received” and none in 2018. This discrepancy could mean that Joe Biden failed to report more than half a million in income on his taxes.

Related: Charges Against Hunter Biden Could Be Imminent

Curiously, those documents are no longer available on his campaign website — while it appears that his tax returns are still posted to the website for public viewing, most of the files previously made available to the public have been removed. Instead, when you click on most of the links, the website immediately redirects the user to a donation page. 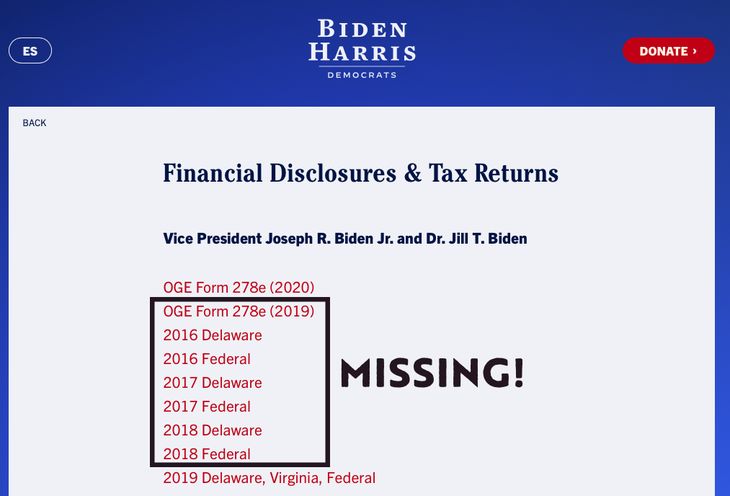 It is not clear when the files were removed or why. But Joe Biden made transparency a key issue of his campaign and presidency, never missing the opportunity to contrast his disclosing of his tax returns with Trump’s refusal to do so. The missing tax returns certainly raise significant questions. Most importantly, is this related to Hunter Biden? Let’s not forget that Hunter Biden has been under federal investigation for tax fraud, among other things. Did Hunter Biden report over half a million in rental payments to his father, but his father did not report that income? Were the documents removed because of this investigation?