What has happened to my kinfolk? Has every last drop of independence and fighting spirit been crushed out of their now mostly socialist souls?

…the era of catering for unconstrained growth in private car use is well and truly over. The review follows the sustainable investment hierarchy which aims to reduce the need to travel unsustainably.…

The Scottish government plans to reduce car kilometres and discourage car use. They tell us the era of private car use is well and truly over…listen and hear the words for yourself…#Together #Scotland #SNP pic.twitter.com/PiA7eOLmhy

Lemme translate that brogue for you: Wave goodbye to your car. The government will determine what travel meet sustainable thresholds, ergo, is “allowable” and all other travel will be on foot or bicycle…or something.

Have you ever seen an episode of the old 60’s series “The Prisoner“? Patrick McGoohan played an ex-government operative exiled to a wonderful, idyllic seaside village, where he had everything he needed…except the freedom to leave.

That’s pretty much the concept the Scottish government (controlled by the SNP- Scottish National Party, center left and social democrat) is rolling out for its people, in the name of “sustainability.” Lovely, all-inclusive, walkable neighborhoods with everything you’d ever need, so you won’t ever need your private vehicle again (Even if you did, tough luck, because they’ve decided you can’t have one.).

Scotland has set out a bold new vision for towns and cities that aims to cut private car use by ensuring all services are within a 20-minute walk or cycle from a person’s front door.

The planning reforms, which were approved this week, aim to create “20-minute neighbourhoods” as a way to “prioritise tackling the climate crisis and reaching net zero,” planning minister Tom Arthur said.

This would be achieved through strong opposition to planning applications for out-of-town retail parks, drive-through fast food restaurants, and other spaces that would necessitate the use of a car.

Such plans will only be supported if they do not “negatively impact on the principles of local living or sustainable travel”, ministers say, while applications for renewable energy schemes such as wind farms will be prioritised.

The Green loons are beside themselves with joy.

…Laura Young, a climate activist from Scotland, welcomed the move.

“Twenty-minute neighbourhoods are a true vision. Planning in sustainability and community centred living is key to enhancing the wellbeing of residents across the country,” she told The Big Issue, pointing out how these areas will create local jobs and free up time usually spent in traffic for other activities, such as time with family and friends, exercise, and hobbies.

Should there be a reason, however remote, you need to venture outside your assigned zone, approved, sustainable public transport will take you there and whisk you back with no waste, no fuss, no excess carbon.

…Gavin Thomson, transport campaigner at Friends of the Earth (FOE) Scotland, said: “Transport is Scotland’s biggest source of climate emissions. Taking action on climate change has to mean taking action to change the ways we travel. Our planning system has had a ‘car is king’ fixation for far too long, and these new measures from the Scottish government hopefully signal an end to that.”

The planning isn’t exactly keeping up with current events, but that’s never stopped the visionaries who have suddenly begun dictating and imposing these brave new worlds. The Scottish government – aligning itself with the British government which at the moment has freezing citizens and can barely keep the lights on – has moved the date forward for their ban on sales of combustion engine vehicles. They’ll be requiring sales of EVs from that point forward. As their neighboring Brits tend to say, “BRILLIANT!”

…In the draft documents, outlining Scotland’s decarbon plans – including a push on renewable energy to power the country while ditching fossil fuels – it suggested a backtrack on the original 2030 date, instead given drivers until 2032 to switch to an electric car.

Today, the government has now confirmed this was, in fact, a typo.

There was a cooler head or two trying to talk sense to the fanatics – as in, again with facts, WE CAN’T KEEP THE LIGHTS ON NOW/IT COSTS TOO MUCH. The disciples apparently ran right over him.

…As originally reported by The Times, Energy secretary Michael Matheson outlined in the plans that he had concerns over how slowly the country’s charging infrastructure was progressing, coupled with how expensive it now is to run an electric car, given the high price of electricity.

This meant the previous 2030 target of phasing out combustion-powered vehicles was not seen as viable.

The news now means Scotland is in fact still alligned with the rest of the UK, which is still firmly focused on banning the sale of new pure-combustion cars by the end of the decade, as it pushes towards a legal target of cutting greenhouse gases to net zero by 2050. A ban on plug-in and full hybrids will follow by 2035.

This overstepping of authority may well be the call to action for people. The reactions have been…less than positive.

The impracticality of the dictates on their very face when compared to the realities on the ground have people pushing back. 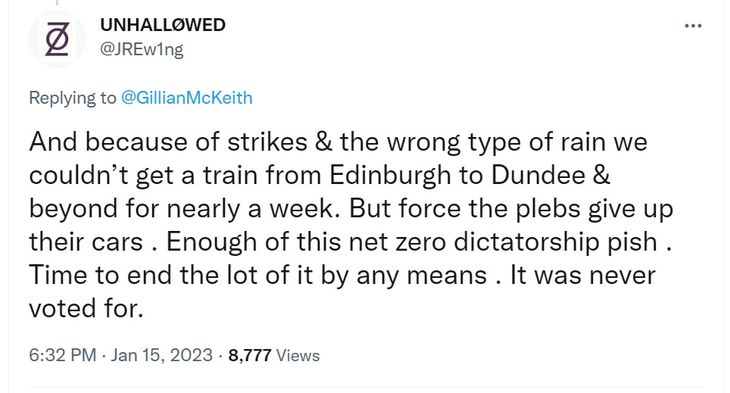 Not to mention the fact folks are well aware of the differences between what the government/elites are dictating as lifestyles all must embrace to save the planet versus the lifestyle the elected/unelected ruling class actually lives. 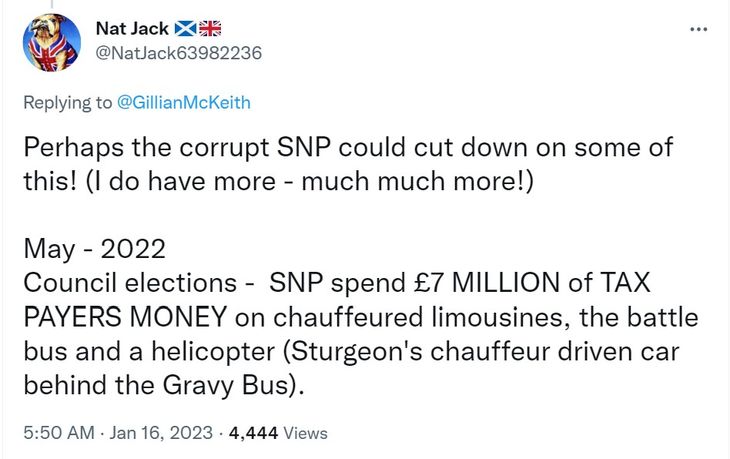 The same SNP, now fomenting plans to make everyone give up their cars and live out their lives in a tiny, managed community, has already had a pretty embarrassing debacle with EVs. Last year, they spent £20M and forced 20 some-odd Scottish police departments to take the electric marvels. You know – the sustainable police car of the future.

Did you know they don’t work without charging stations? Seems that’s the case.

SNP humiliation as they invest £20m in electric police vehicles but not chargers to use them
The Scottish Government were accused of failing to tackle climate change by not investing in all the equipment needed for environmentally-friendly police vehicles.

…It was revealed that at least 20 police stations across the country had the bespoke cars but officers were unable to recharge them on-site, meaning they were reliant on partner organisations and public plugs.

This is despite Police Scotland forking out almost £20m on a fleet of electric vehicles so that they can provide “a fit-for-purpose, efficient, effective and sustainable 21st century police service.”

Figures discovered by the Scottish Liberal Democrats found that a whopping 23 police stations had the environmentally-friendly cars but no charging points currently installed.

In addition, there are currently 21 sites which have just 28 chargers spread between them. The party were approached by one police officer who told them: “Where I work they gave us five new electric vehicles but no charging point.

…”They had to charge them via one cable through an office window and into a domestic three point socket…guess what happened to the socket…now the five vehicles are being deposited overnight in various council car parks across the town, in the hope that no damage comes to them.

Meanwhile, we are back to using the old diesel cars, because at least we know where the service station is.”

The SNP – now being called the Scottish Nightmare Party – would do well to spend some time out of climate-controlled chambers. Maybe take a walk in the hills. Clear their heads.

The Scottish government will impose 30% cuts in road travel, to end travel in private vehicles. No-one voted for this. The rights of free people to decide their own destiny is trampled underfoot to meet UN imposed targets. Next they will come for you. https://t.co/PF7EiTzZMS

The Scottish people should clear the decks during elections or I’m telling you – they’ll be mandating bugs for dinner next.